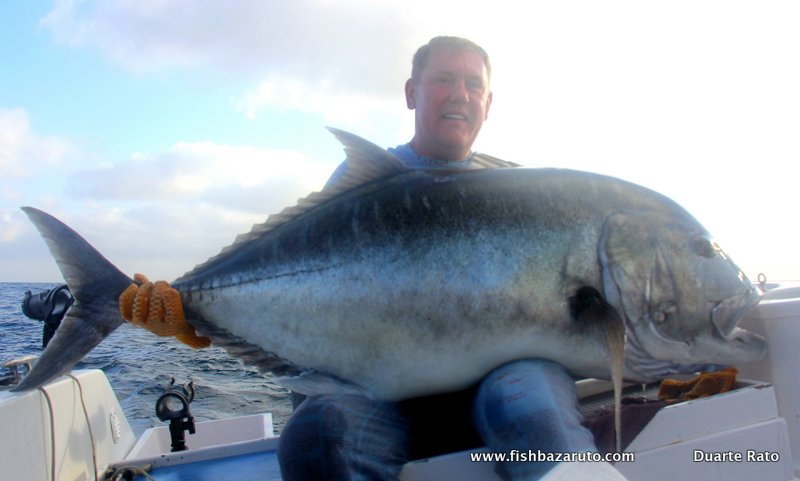 Auspicious Start to the Marlin Season, great Game fishing and huge GT´s up to 50 kilos T&R

It´s been a very busy couple weeks here on Bazaruto getting boat and tackle ready thus the lack of reports but there’s been some great game fishing and the very few boats that have brought out the heavy tackle are having an auspicious start to the season.

Kingfish this size are as mean as a hotted up marlin

Small marlin abound in the archipelego this time of year, but the big ones have started showing themselves

King mackeral are available on Baz all year round

Although there were a number of smaller fish caught on light tackle all along August and early September, we on VAMIZI caught the first decent Marlin we heard for the season on the 10th of September, estimated at 300 pounds. A few days later BELUGA caught one Black Marlin out of two and the next day, the 16th September, BIG BOB had a good day raising 4 fish on the baits and releasing two between 150-200 pounds. Then the next week really fired up with MARLIN, QUATRO and BIG BOB fishing and getting a few good fish up to 650 pounds. Due to a combination of a super freak big tide and easterly winds it slowed down for a few days this last week but three days ago everything come on the bite again and there were a few more good Blacks up to 500 pounds released.

Although the water has still got a tint of green to it due to a few recent northerly´s and the temperature is in the low 25c, there as been a lot of bait and with only one or two boats fishing every day it looks really promising.

The game fishing as been excellent, especially in the early morning down the south end of Bazaruto with loads of king mackerel, Yellowfin tuna and bonito and there as also been a few sailfish around.

For the last 10 days, we on VAMIZI have had mostly game fishing half day charters mixed with a couple hours here and there of Marlin fishing. It is hard not to be Marlin fishing but we have had some seriously good light tackle fishing nevertheless with a couple of sailfish, lots of king mackerel up to 23 kg, bonito´s, skipjack, Yellowfin tuna, wahoo, dorado and some brute GT´s. The guys also wanted to catch a few sharks so we have been putting a few baits out and caught some Zambezi´s, dusky´s and blackfin´s.

Despite only pulling lures on the heavy stuff on the way back for a couple of hours we also had 3 bites from Black Marlin and releasing one.

But, the most outstanding was the Giant Kingfish we caught this last week with Igor and Alexis from Russia. On their third day we went specifically looking for them in the early morning and has we arrived at the reef I had chosen we immediately hooked up to a really nice one, which we released and called about 30 kilos. On their last morning we again decided to work that spot early morning and once again we hooked up to a real monster as we got there. But this turned out to be a very special fish, at a very fat 138cm, we estimated this fish a 50 + kilos, our second biggest GT in 16 years of fishing the archipelago.

I am not sure Igor really understood how significant his catch was so to put into perspective I told him that we have released way more Marlin over a 1000 pounds than we have even seen GT´s over 50 kilos!!!

Up next we got Mike and Andrew arriving for 4 days and then Carl Jankowitz for 8 days and will surely put more time into some serious Marlin fishing!