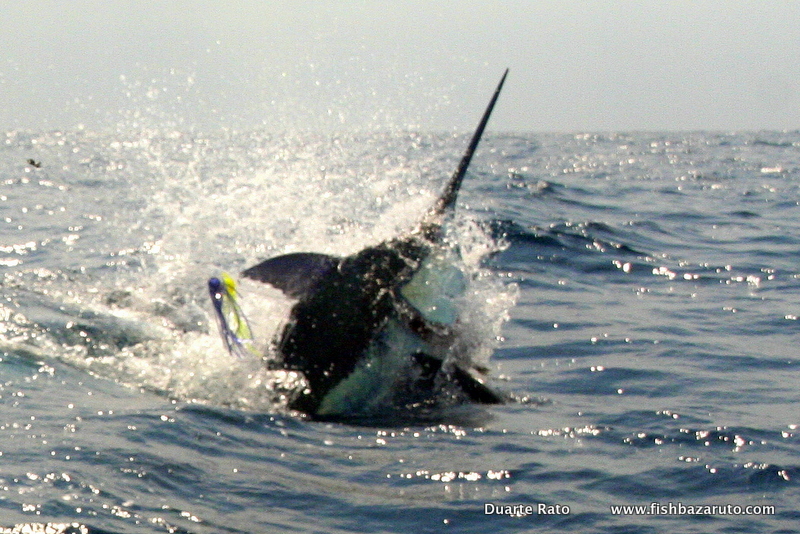 The last few months have seen a really good Blue Marlin in bite Mozambique and Africa´s east coast all the way from Kenya down to South Africa, not only in numbers but with some really nice fish making their appearance.

Despite the low number of boats (with most of those being private weekend warriors) the Inhaca / Maputo area is, probably by far and as usual in the last few years, seeing the most numbers of Blues along with a good number of stripes this time of the year. Most likely, because of the absence of serious charter boats and having been discovered fairly recently, this is one of the east coast best kept secrets,  probably the best in terms of numbers.

I would go so far as to say that, from what we have seen in the last few years, if this fishery had more experienced crews and boats fishing it´s waters day in and out it could very well be right up there with and closely rival Cape Verde in terms of numbers. Most of the fish in the area seem to average between 2-400 pounds but a few fish well over 500 are fairly regularly caught and many more lost.

Due to the unseasonal windy and unpredictable conditions the season started later than usual with the two first local tournament´s (when the large majority of boats fish) having to be postponed due to blowout´s. We talking small boats (16 to 31ft) and a long run! Even though, a few boats periodically fished during January reporting an average of 3 to 6 bites a day including a couple of triple headers. Last Saturday, they had the first tournament for the year and although overall the guys reported less releases than normal due to very finicky fish translating into a horrible hookup ratio, there where up to 9 fish up for a boat on the day.

The winning boat, Yolanda released 4 out of 6 (a few days previously they went a 2 for 6 including a triple hookup that went bad and a really big blue that come off!). The second boat Bite Me released 3 and there was a lot of boats with two or a single release.

The season at Inhaca / Maputo runs all the way to May and seeing the all of southern Mozambique as experienced some pretty high water temperatures the guys are expecting for it to peak into the next couple of months.

That same unseasonal windy weather and extreme high temperatures as kept moat boats from targeting Blues out wide at Bazaruto. There was also a really exciting run of small Blacks inshore and great plugging for GT´s and light tackle for a diversity of nice game fish. Thus, very few boats have ventured out there, but when they did there was some exciting results. As the weather settles we should have some good news in the weeks to come.

Kenya seems to be producing a constant bite on Blues along with a Blacks, a few stripies and sailfish. But most memorable has been some reports we have been hearing to the outer banks with exceptional numbers of broadbill releases.

Down south in South Africa we have had reports of some good numbers of both Blues, Black and striped Marlin. But what has been really unusual is the number of good size Blues being caught. Amongst other´s the two best fish I heard about where the two below.

Fishing out of Sodwana, Brad Kidd send me some pictures of a really nice blue caught aboard his boat the B´s Nest. A. Schoeman was on chair duty when the huge Blue inhaled a Pakula Lumo Sprocket on a #80 outfit, a fish they later released and conservatively estimated at 800 pounds.

But, the fish that has really made headlines this past week was an estimated Grander Blue released by Bully de Ricqueberg aboard the 21ft Eye-Tie with Roberto Fierro at the wheel. There as only been two Grander Blue Marlin caught in South Africa (and no Black), both of which were weighted. Due to some very odd laws this fish that arrived at the boat dead, could not be boated and had to be discarded. A real shame has it measured an impressive 148´´(376 cm) by 82´´ (208 cm) with a 24´´(61 cm) tail. This measurements put the fish at 1,245 lbs. If correct it would have beaten the SA record by a long haul.

Speaking to some mates of mine in SA to understand why they could not boat the dead fish it seems that being part of the Isimangaliso one can only take out a billfish if fishing the area outside a tournament (as long as follow some national regulations). However, if fishing a tournament, as it was the case, all billfish have to be released without exception, failing of which could lead to heavy fines and banning of individuals and organizers.

Might the nice Blue Marlin bite in Mozambique and the east coast if Africa carry on strong for the next few months and looking forward to getting back on the Ocean in a few weeks.

To all of you tight lines, be happy and enjoy the time on the water…

Now it´s time to batten down the hatches, and make sure everything is safe, fair & square for senor Dineo, tropical storm imminently approaching anytime later today. Does not seem like a big one (cat. 1)…but to all of you out there from Bd, Inhassoro, VNX, Massinga all the way down to tofo and surrounding areas be safe and be cool…