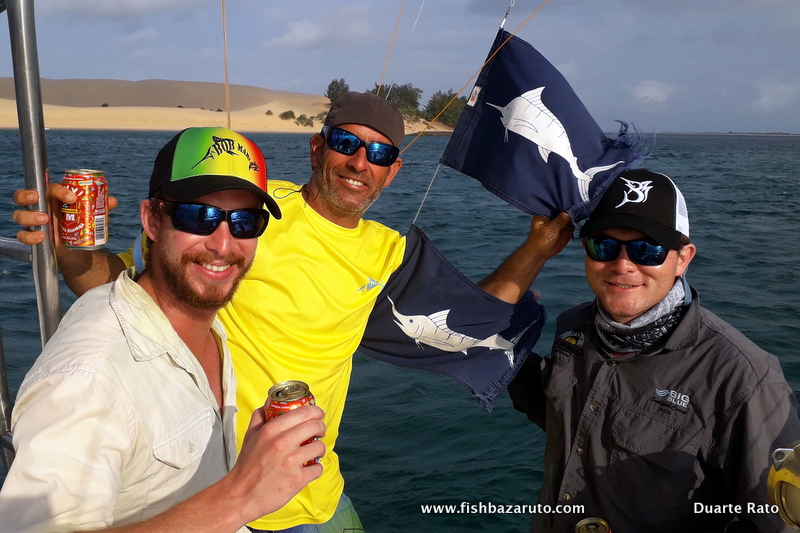 It’s always cool to get someone´s first Marlin and that´s exactly what the mission was for the 5 days we had with good friend Mike Goch. This year he brought his son Rylan to try and get his first Marlin and once that was done got his son´s friend´s Jimmy one as well.

We had just finished with Carl´s Jankowitz that released a small one on his fourth day and then a #400-pound fish on a live YFT on his last day. That made a total of 15 raised for 8 bites and 5 releases in his five fishing days.

You can see report of his trip here as well as the first big Marlin of the Season caught on Spanish Fly on the second link;

The bite slowed down for the first two days with Mike but the boys enjoyed getting their first hammerheads on the live baits along with some nice game fish including wahoo, Yellowfin tuna, skipjack´s and bonnies.

We started our third day making bait and it was awesome nonstop fun catching loads of gamefish although not many quennies which was our main target. But as soon as we put the bait rods out it was ON and we released many big eye kingfish and pompano and kept the queenies and rainbow runners for bait.

As soon as we left the bait spot and run out we saw many different pods of birds in different directions. Choose the one to the south and it was a bait ball with many sharks, YFT, bonnies and other gamefish. Put the bait rods out to catch a livie and in seconds both where on releasing a prodigal son and we put the other, a big YFT on the tubes.

Run out deeper put the YFT out and started working south towards the canyon.

As soon as we got to the marks I have off Beguerra, an area which was so good for us last season a nice one come in. We got the bite but the #700-pound Black Marlin started jumping straight away and we knew she was wrapped and not hooked. Rylan got in the chair and we still had her on for a while before coming undone.

We put a rainbow runner skipping and the quennie as a swim bait and when we got to the canyon we saw the biggest wahoo we have ever seen jump on the swim bait. This thing was so big the guys tough it was a dolphin!!!!

Put the lures to work back against the current and as we got to Giants at the end of the day we had a 300-pound fish come on the long left but jumped off after peeling about 100 yards.

Hopes were high as we made our way to VI mile the next morning.

And, for sure they were snapping real early.

Spent half an hour getting bait and finally 3 YFT.

Put two in the tubes, run out and 20 minutes after setting them out have a small 200 pounder come on the long bait but jumped off after the initial run.

15 minutes later have one about #300 come and take the other bait!

We hook up, Rylan gets in the chair and we released that fish in less than 10 minutes!

Mission accomplished…Rylan got his first Marlin!

Went inside to find more bait, put the two long lures out as well and have a small fish #150 take the Magnet pull a few yards and off in 37 meters of water!

While we looking for bait saw some sailfish bailing bait which was pretty cool!

We finally get another bait, run out put it in the water and literally within 5 minutes have a 200 pound fish and we release the second of the day.

This time for Jimmy´s first Marlin ever!

The beast from the East started blowing and the afternoon was pretty quiet.

Not the fastest fishing or the biggest fish but both boys got their first Marlin so happy days.

Great to have Mike along once again, just a pleasure to fish with…until we meet up in Santa Maria in March for some Blues!!!

Thanks to Pulsator for having sent some replacements…we lost a few and some other´s are looking a bit scrubby!!!