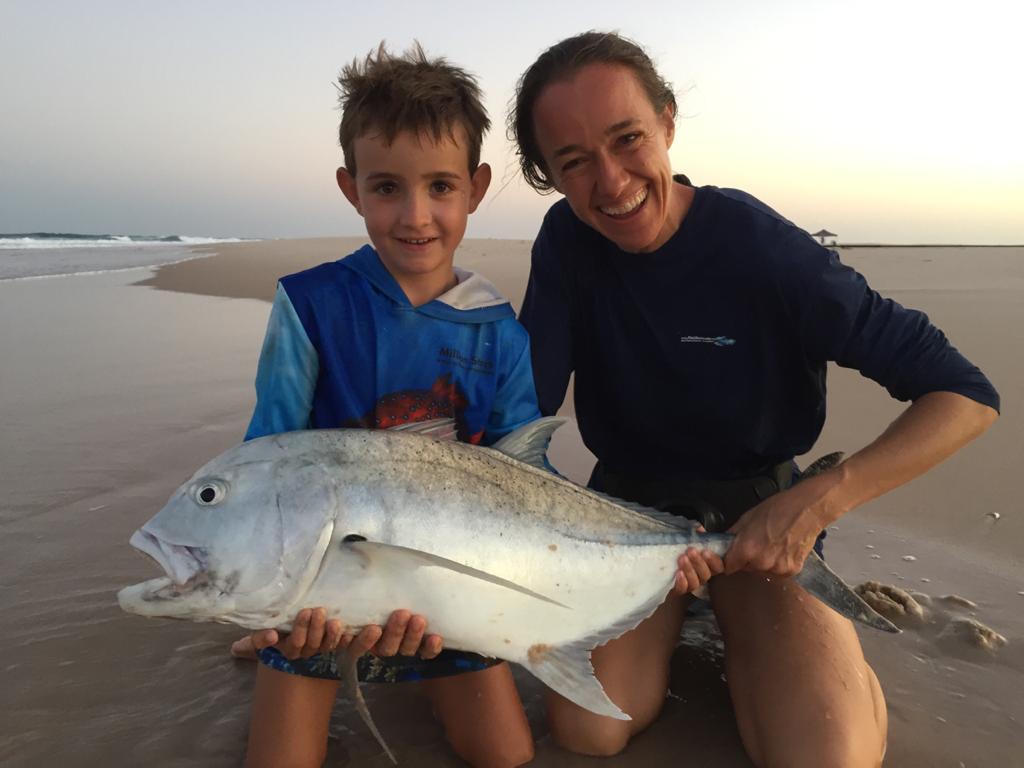 After the Heavy Tackle Season and the extremely warm water that pushes in, January is normally our admin month. Where we finalize our bookings for the year, marketing, procurement, and all else…. but, that does not mean we do not fish at all! Last week we had a great late afternoon, night fishing session with my boys (and Gretha) from the beach, mostly targeting Mozambique GT ´s.

It was not a great tide for it, but this was a trip for their birthday and we all got some fish and had a great time.

It started with a live bait catching session with the boys bringing in dozens of small carapauw, sand mackerel and all other sorts, which, of course, they always find extremely exciting.

Once we got there we set up camp and little Duarte, who turned 7, had a blast catching about 8 wolf herring´s late afternoon with the light spinning tackle.

Unfortunately, we did not have the camera with us…

Little Dario, not so prone to fishing with rod and reel just run around chasing crabs and all other kinds of creatures.

Just before dark, we set up the rods with the live baits for Mozambique GT ´s and whatever else come along.

Mum hooked up straight after.

Mozambique GT ‘s from the beach

After a nice fight and a long walk down the beach she released a nice Mozambique GT.

These smaller Mozambique GT ´s were certainly on fire and while she was on it I released a smaller one.

Then Gretha was on again this time catching and letting go a nice size springer.

We released another 2 Mozambique GT ´s before giving it up as the boys where hungry and tired…after gulping down some nice chickens on the braai they collapsed by the fire. We still had a few dops around before calling it a night…

A few days later we took out Seth Sands and his newly wedded wife from Florida for a light tackle game fish day on the 38ft Game Changer.

Great couple and despite the water being green and very warm at 29.6c we had a very enjoyable day.

After a slow start as we worked further north we finally found some action just south of Nhangosse and had good fun catching a bunch of Kawa kawa´s with multiple and triple strikes being the norm.

At lunch, we put some T-Bone steaks on the barbecue and went deeper so as to, presumably, have some quiet time to eat.

As the guys dished and sat down to that juicy steak and salad we hooked up on one of the short rods and a sailfish starts dancing in the wake.

The fish did the usual big run but Seth made short work and we released the 30kg fish shortly after.

Although mostly in smaller models there´s plenty of those where Seth comes from.

But there was one species that he really wanted to add to his resume and as luck would have it we come across some nice size YFT as we made our way back.

He got a nice one that made for a great fish on the light tackle and delicious sashimi and seared tuna that night.

Great day with great people to end the month…

Visit our Rates and Contact page for more information on fishing with us.