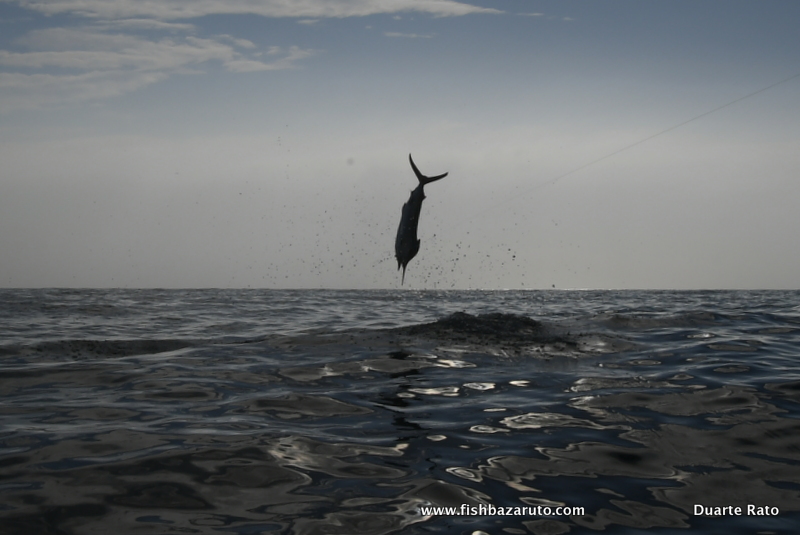 Although they are known to be prolific in the first quarter of every year, it certainly seems, that for the past few months, the Mozambican coast is experiencing unusual numbers of exceptional small juvenile Black Marlin.

This as certainly being the case off the Bazaruto Archipelago.

In the last few months, we have seen the most and some of the smallest Blacks, caught by local fisherman, we have ever seen here.

It seems that, almost every time we go out, there is an 8 to 15 kilo fish being carried on the beach or on the road; either someone walking with it over its head, on a bicycle or in local communal transport (chapas).

We always try to stop and speak to the guys about the fish.

Most times it is someone who has already bought it from local fisherman to re-sell it.

But, the few local fisherman we have spoken to, have said that since February and up to now, they have been seeing and catching exceptional numbers of juvenile Black Marlin.

We are now on a senseless, hard to explain fishing lockdown, but, before this happen, a couple weeks ago, the few game boats fishing out there were also releasing a few of these very small juvenile fish.

Dr. Nelly Kadagi, from the BILLFISH-WIO (Western Indian Ocean Billfish research), as also been sending me a number of photos from very small fish caught up north.

Mostly in Pemba, the Quirimba Archipelago and surrounding areas.

See the link to the BILLFISH-WIO research project below;

We have written about the small Black Marlin Duarte Jnr. released about a month ago out of BD, just north of us. Again, the locals told me they had been catching some very small Blacks.

After that we went south to Pomene and, once again saw and heard of many Juvenile Black Marlin.

To see the link to the Pomene trip go here;

Curiously, unlike any other place on the Coast, where traditional fisherman mostly use dhows and dugout wooden canoes, in Pomene, most of the line fishing local fisherman, are using high tech, single or double, fishing kayaks.

This certainly gives them the advantage of more speed in comparison to the usual traditional vessels. But, these juvenile Black Marlin are still a by catch on the carapau drift and slow trolling baits these fishermen use for their main quarry; the cuta or king mackerel.

But, this rather small Kayak fleet, was, on a daily basis, bringing in astonishing numbers of Juvenile Black Marlin, which ranged anywhere from 8 to 30 kg.

We went around and spoke to a few local fishermen who, all agreed that they are catching way more small Blacks than usual. Joao, who I could see was the most respected and experienced told me;

We always catch a lot Blacks between the months of October to May, with the March to May seeing the majority of smaller fish. But, this year we have been catching way more than normal. No comparison at all. And, overall much smaller fish than usual. We do see the odd really big fish, and only last week we had one about 150kg that dragged us for an hour before breaking us off, but it’s mostly the smaller ones we catch.

Yup, we know all about it Joao!

From what we spoke and gathered and saw, and as is normal in Mozambique´s south coast, these juveniles are being caught in fairly shallow water, mostly between 15 to 50 meters of depth.

Just this past week a mate of mine that was surfing the break point at Pomene told me he saw one of the Kayak´s fighting a small Marlin just outside of him. He literally told me he could see the fish jumping from where he was, sitting on his board.

The vast amount of bait (mostly jubes jubes, but also big bonnies and kingfish) we saw every day from the Pomene house, working all day long where these kayak´s where fishing might, partially, explain the exceptional numbers.

But, there must be some other, more plausible reason.

I mean the vast majority of fish being caught are somewhere between 4 to 7 months old.

Why so many this year?

The only explanation I can come up with is that, for some reason which I can’t phantom, but would certainly like to know, is that there was an unusually high spawning cycle this past breeding season (Sep-Nov) of the Bazaruto Archipelago and surrounding!

And, how does one explain all the small fish coming out of Pemba, more than a 1000 NM to the north?

I just find it hilarious that, scientifically, no spawning ground as been identified in the Indian Ocean!

Yeah right…these fish just fly in from the Pacific!

So many interesting questions and so little being done to actually answer them on Africa´s East coast.

It’s a pity no one is taking the time, energy and resources to study these big females, that come to spawn on the Bazaruto Archipelago and find out where they going and all else that comes with it.

And that, when one does find a way to get satellite tags to do some of that work, the political and scientifically dogmatic establishment, ensures a level of authoritarian bureaucracy that makes almost impossible.

Anyway, just great to see all these small juvenile Black Marlin all around the coast and in such numbers.

Pity they are being killed in by the local fisherman, but the guys do not know any better and do need to make a living after all…