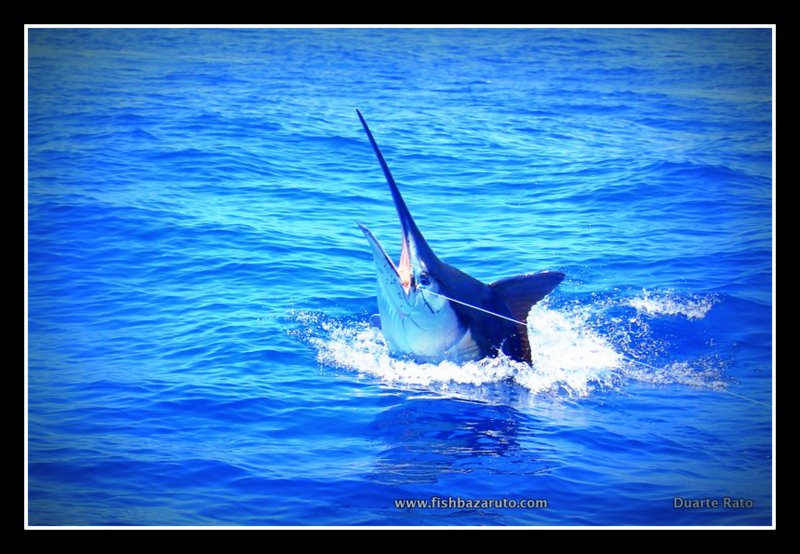 Right in the middle of our heavy tackle Season but, unfortunately our friends and clients can’t get here and hard to say when they will…as usual rules and regulations are obstinately written in grey for the benefit of the few…

Anyway, back to fishing and all those big Blacks that are enjoying a semi break on Bazaruto Mozambique´s offshore waters.

This last week finally saw a few fish from the very few boats that ventured out there.

It’s been rather windy, but from the right direction and the southerly´s have brought in a really good looking body of water around the 25c.

The best bite seems to be up north and, on the 13th Flamingo had a good but, unfortunate day when they released one about #500 out of 4 bites, all on live bait. They also missed a #800, a #350 and pulled on another #500. The boys are fishing out of Inhassoro on a motorized dhow they jacked up for these hard times with outriggers, console, electronics, diesel inboard and backup outboard. Slow but efficient and they going out for 2 or three days at the time making up for the long slow runs.

The next day was quiet for them, but the only other boat fishing up north `tamos Juntos reported loads of bait and good action going 2 for 2 on a morning´s half day on fish a #250 and a #500. Both fish coming on live bait as well. 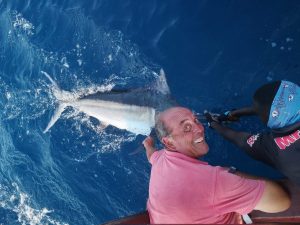 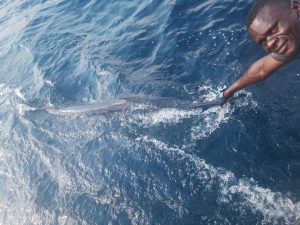 We fished on Caras down the middle but bait was really hard to come by and little to no surface activity and thus not much luck on the lures.

Finally, mid-morning we got a YFT and a missed a Black around #350 a while later in a very unorthodox way.

We made our way back early but not before having a triple Sailfish strike in 80 meters at the bottom end of Giant´s. Pretty chaotic on the small boat but we managed to release all three fish and Ivan´s first ever billfish.

Fishing down south Spanish Fly went 1 for 1 on another Black Marlin estimated at #250 on a live skipjack. 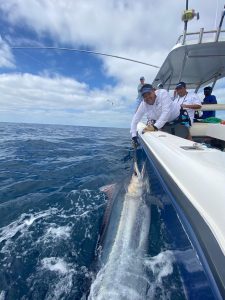 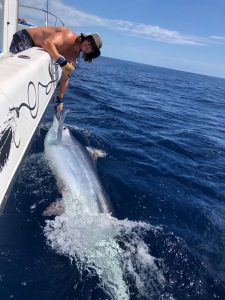 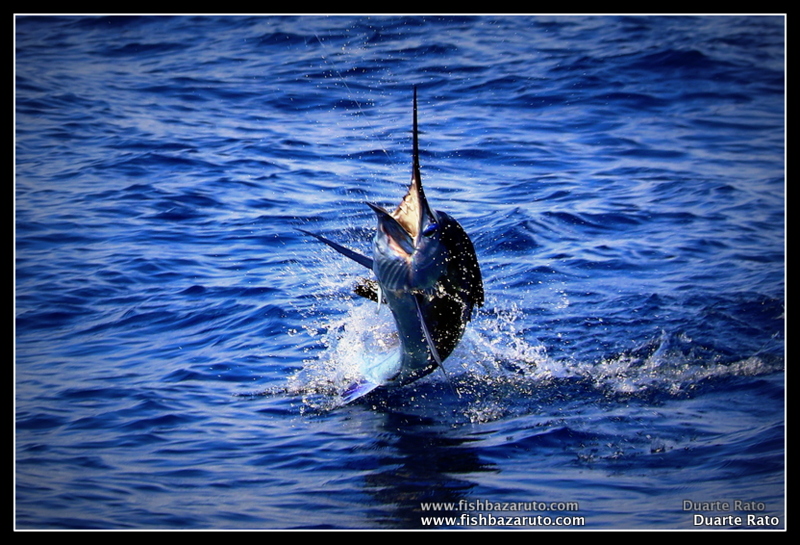 On the 16th we were out again on Caras, this time trying to get Ivan´s first Marlin.

We decided to run south and it was cool to see all the activity around best in the early morning. We picked up a nice size rainbow runner and pulled it south with the current all the way to the pinnacles. We saw a bunch of skipjack schools on the way down and survived a few T-bone attacks, but eventually after 2 hours we got taxed.

Put the dead (skip & swim) baits for a couple hours but when we eventually picked up an 8 kilo YFT we bridled it and started slowly making working our way up north. A couple of miles before best we did a shallower tack and get a hot fish coming in.

The greedy #250 pounder gave us an absolutely amazing show and a real nice treat for Ivan´s first ever fish.

Mission accomplished and some cold one´s on the way home!

The 17th was slow for all three boats out there but the next day Vida Boa, having had three slow days down south, decided to finish their last morning on the top end of the Canyon and where rewarded with a fish on the swim bait.

We fished the middle area which was pretty slow and had our only live bait for the day sharked after 2 hours. We pulled the dead baits for a couple hours before running home early and missed one on the swim bait.

Up north the only two boats fishing also reported slower fishing… that is until late afternoon.

Flamingo where slowly making their way home after a three-day trip.

As they got to shallower water north of the lighthouse and into an area called Cuda alley, they unfortunately decided to take their YFT live bait out and put a few small jube jube´s to try and catch some cuda (King mackerel) for the pot.

Straight away ad in 30 meters of water they have a fish looking just shy of #500 take one of those small baits on the light tackle. They fought the fish into the night for 3 ½ hours before parting the line in over 200 meters of water. Thought luck….

No one we know as fished for the last few days and only hoping things open up for the last part of the Season so we can get out there back to back for a couple weeks.