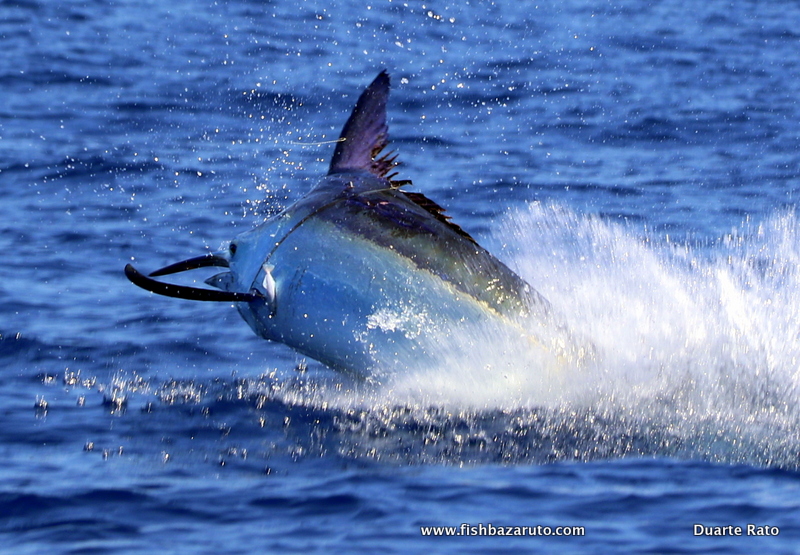 Unfortunately, it’s not been back to back aboard Vamizi, but, getting a few days out there driving some private boats and it’s been pretty enjoyable fishing with great folks.

We had a four-day sting at the end of October, with Warren aboard Strenue, where we caught a 400-pound Blue and two Blacks of 700 and 350 (with a few more missed) and some good game fish including a nice GT on the bait rod.

At the beginning of November, we joined Jeremy, Roger, Lance and Mike aboard the 38ft SuperCat Katherina for three gorgeous weather days. The bite was slower and bait was very scarce but we had a great time and awesome company.

On the first day, the 2nd November, we run more than two hours to Mario’s. A pretty amazing reef way north of Bazaruto. This was new ground for me and pretty interesting to see fish it.

As we got to the reef we put the bait rods out and in no time had a bunch of bonnies. We live baited two for about an hour while rigging the dead baits which we put out at around 10am.

About an hour later and just after the tide change we had a blind bite on the big swim quennie on the right and hook up. As invariably very big fish do, she did not do much or show itself for the first 15 minutes or so. She just lazily swam as Mike settled down in the chair.

Right about this time the starboard engine died on us with fuel problems. And then, she showed herself in the distance…a real beauty!

A few minutes later she once again come to the surface, this time much closer as we battled to get on top of her with our limited maneuverability.

When she jumped, showing all her beauty and girth we were in awe.

For about ten minutes she was there for the take but not being able to back up and with such large turns on a 16ft beam vessel on one engine we were unable to take the chances she gave us.

50 minutes into it, we had a nice angle on her, and where getting the upper hand when the hook pulled off. Tough luck…it probably never set.

I have looked and zoomed on the pics to see what happen but hard to see. Looking at the leader don’t think she was ever hooked.

It’s a long way to the area, so, looking at the beautiful forecast we decided to sleep over at Mario’s the next day.

We had a later start but had plenty of bait and we set the dead baits about an hour south of the spot. Again, around the tide change we had a bite on the big swim quennie on the right. She dropped, but come back again and we hooked up.

Roger got in the chair and we had a wild Rodeo as this fish just kept on jumping like a maniac. Chasing it forward, backing down at full speed, she was just full of energy and we got some great video which we will post sometime later…

We drifted far south overnight and as planned decided to start the day on the shallow banks of 25Mile North. Some amazing structure and we got a bunch of bonnies, most of which we kept for skip baits but decided to swim two live, a big and a small one.

We worked an area just to the south East of 25 North. A place with a considerable drop and where one could see a bunch of current lines. It looked good, but it was slow. We had out small bait taxed and when at 2pm we had no action we made the call to change over to the dead baits.

I had a feeling that we had been working to deep. As the previous two weeks, the water looked stunning and for this two weeks we had seen most of the fish between 50 and 65 meters. We had started working south on the 60-meter line and not half an hour into it we got a bite, but missed the fish on the swim bait again.

We had a long run home so after another half an hour picked up and run for another superb dinner!

We been getting Vamizi and the gear ready and start with Carl in a few days.

Except for Big Bob who´s been pretty much getting 1 a day (up to #500) no one else as really fished this last week.

Can’t wait to get out there, make the most of the few weeks we got left for the Season and hopefully come into contact with another slob…or two!.