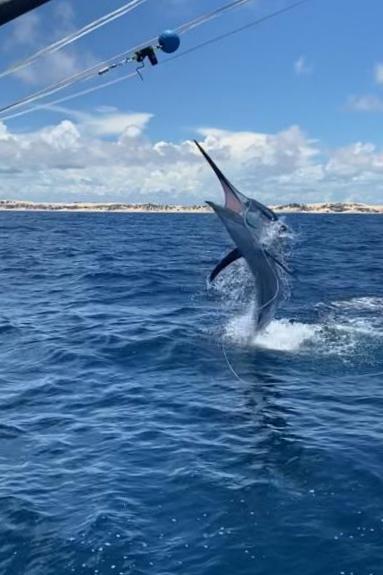 It’s ironic how on our last post we wrote about all the big fish we caught of the Bazaruto Archipelago in December and then catch our biggest fish for the short season in the last day of Bazaruto´s Marlin Season.

You can see that small piece on Bazaruto´s Marlin Season in December´s on the link below;

So, after having finished up in late November with Carl Jankowitz we started again with Carl on the 8th who come with his all family and Jason Trollip, who´s his eldest daughter boyfriend…and what an experience he was about to have!

You can see Carl´s November trip report and photographs on the link below;

It was very messy and it was disappointing to find some very patchy water on our first day out, the 9th of December. At least, due to the cold front we had the previous week the water temperature had come down to the low´s 27c. And, the water was reaping at 3.5 knots from the North…. It was insane we were doing live bait speed on the lures going against it!

We found a better-looking patch around IV Mile reef and proceeded to work the area and at 8 hooked up to one that went on a mental run. Jason got in the chair to fight his first ever Marlin but the hook come undone shortly after.

In the same area and two hours later raised another one, very shy, that just knocked the long rigger lure down.

The next day was much calmer and we decided to have a look south.

Started the day at our bait spot and got what some nice swim baits and one queenie big enough to skip.

Shortly after saw a big skipjack school and where unlucky to lose two by the boat which would have been perfect live bait to work down south.

Carried on with the lures until the canyon and had one knock a lure but again very shy.

Put the baits out and despite seeing 2 free jumpers had no bites.

We put the lures to troll back against the current in the afternoon and had another shy fish come twice on the lure but no take.

The we had a triple sailfish strike, missed both on the Marlin lures but released the one on the bait rod, again a first for Jason. 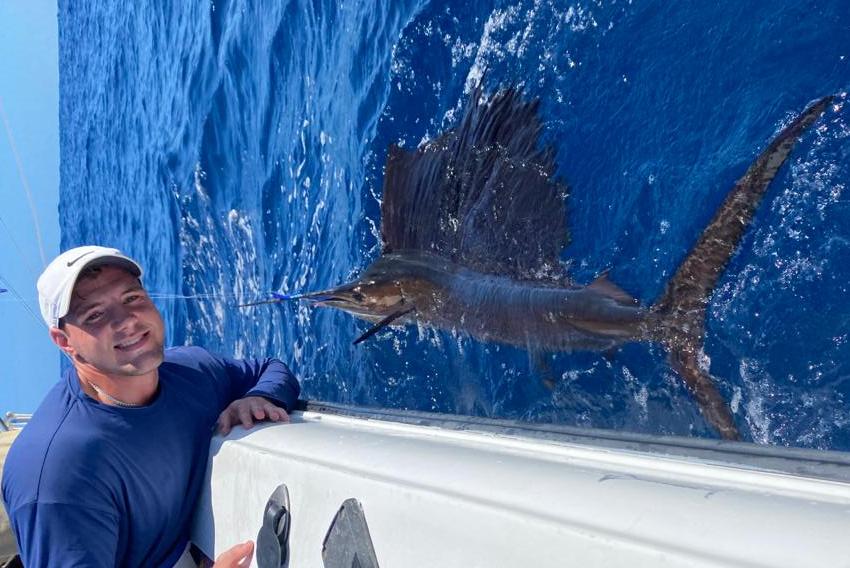 Unfortunately, Carl did not feel well and we did not fish the next three days but on the 14th we were back there hoping for a great end to Bazaruto´s Marlin Season.

We went north and the water was filthy.

As we are putting the bait rods out, not 100 meters from us a cuta skyrockets out the water after some game fish.

It does it again.

Then, on the third jump a Marlin jumps out and catches it midair!

Jiiiiiii, its thought out there!

Did not get that one to bite and with all the kak water decided to head out wide for Blues.

In 200 meters, there´s an all bunch of skipjack so catch one and change of plans as we live baited that one shallower.

As we doing so some 10-18 kg YFT come up bursting a number of times and we got stuck into them on the plugs…pretty good fun and some more Carpacio, Ceviche, sushi and sashimi 🙂

We get the bat taxed, put the lures and head wide.

We got to the 320 mark where we planned to fish but better but still green. Work around the tide change but then decide to work south with the current.

The water gets better and better as we work south and at Sailfish Bay we get 2 small yellowfins on the same daisy chain.

Put both out and work south and deeper.

Ten minutes later at 11h55, 146 meters between south of sailfish and IV mile we get the bite.

Hookup, Jason gets in the chair and we on to the races on a nice one!

Get the leader in 20 minutes, some crazy jumps as the fish tries to get a boat ride.

1h20 and pretty cool fish for Jason´s first Marlin which we called #850 – took a quick measure on the girth at 70 inches!

Worked the dead baits all the way south to Giants where it looked real good but no more bites.

But, who cares that one fish was all we needed for a great end to Bazaruto´s Marlin Season! 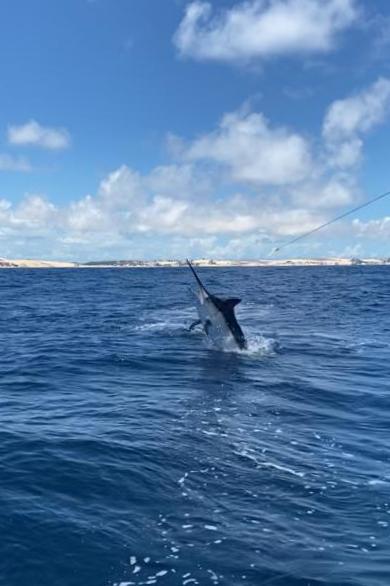 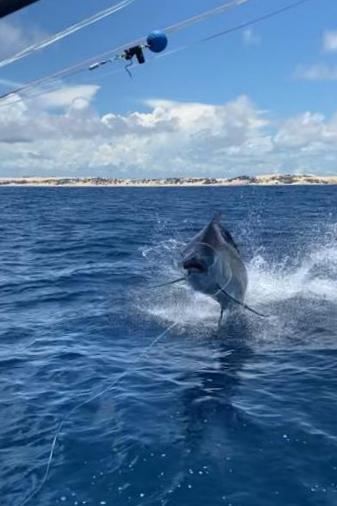 That fish was hot and almost got a free boat ride…

Some epic jumps right there, shots taken from the epic video!!!!

Here´s a link to the short video…

That’s it from a pretty messed up year!

So, to all have a great Christmas and may 2021 be better in many ways than this year.

Lots of love and laughs and have a merry one.

We will be back at it from the 3rd of January…

…and anyone interested we still have some open dates in May (which is a great month) as well as two slots available during the peak in November and December 2021.