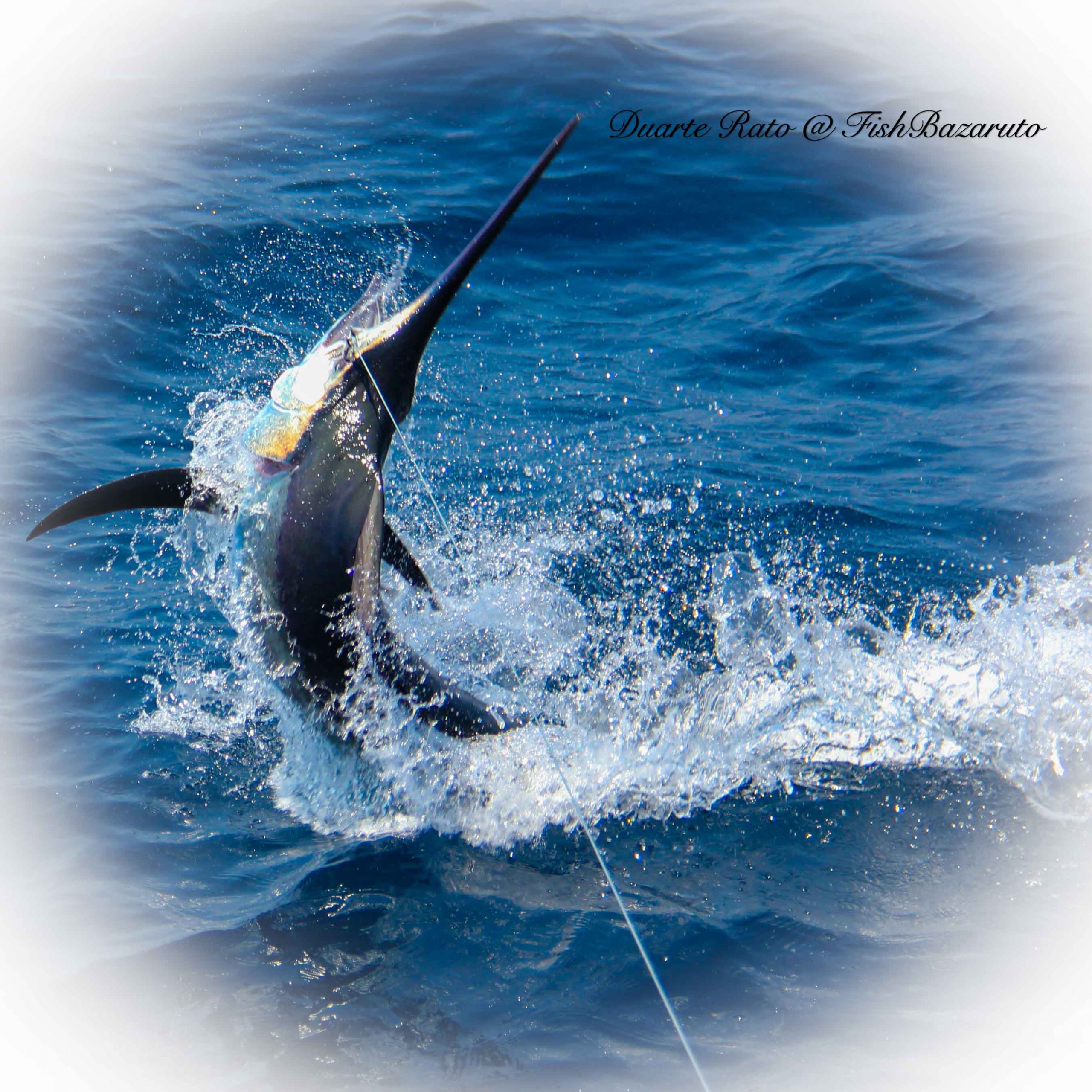 A marlin a day…with FishBazaruto.com

Just finished with Carl Jankowitz who come for his first season trip (back @ the end of October) and Greg who was after his first Marlin and ended up catching three.

All in all, we raised 13 fish and released 6 out of 10 bites in beautiful calm flat weather.

Besides that, we caught some good game fish during early morning bait sessions.

Headed to V mile where we had a bait session and shortly where into a quadruple Yellowfin strike.

Got 3 and live baited 2 but after one being taxed after 2 hours, we decided to take the other out and put the dead baits.

Got some skipjack on the plug but otherwise, it was slow going with the water a tad green.

Lost a real nice wahoo and then come in early for a short day not before having another bait session catching some queenies for swim baits.

We did not fish the next day as Carl wanted to take the family to Paradise Island to do some snorkelling.

The next day was a short one and we saw three.

Had a small one take the lure early morning in 35 meters of water as we putting the lures out.

20 mins later at 7 mile in 57m get bite hookup on express fish about 350 jumps, runs jumps again and pulled the hook.

Then just before heading back missed wahoo and then changed to the dead baits and had a fish come on the skip bait but no bite.

Started the day with a bite on the skipbait and Greg released his first-ever Marlin.

We then caught a few game fish, live baited and just before one had a real nice one looking 700 plus that got all wrapped up on the bite…jumped jumped and off.

On the 1st October we only fished a half day as Carl wanted to go to Paradise again in the afternoon.

Again, early morning bite just after the tide turn and not 300 meters from the big fish bite yesterday, we hooked one on the swim bait and released it, this time for Carl.

Absolutely lovely weather and what a great afternoon snorkelling at PARADISE and then a bait session for queenies.

Great morning catching the first for the trip for Carl and back at 11 to go for a snorkel and paradise and bait catching session.

On the 2nd we broke the golden rule – Don’t leave fish to find fish!

We decided to go and have a look up north.

Not the best of surprises as we found cold (23.7c) green water full of jellyfish. It was a big disappointment after 2 days of catching one at the morning high tide turn.

Well not much to do but put the lures and plug out south ASAP.

By the north of Sailfish, it got better and as we worked 9 mile some skipjack started to show and we picked up one and worked south with it.

We got to Giants two hours later where it looked great and Morgan had already released 2 fish.

Not 20 min later of working the area we get the bite, Greg jumps in the chair and e had the leader in literally 2 minutes and had some wild rodeo on the leader with the fish almost jumping on the boat!!!

Put the dead baits and 20 mins later at 12h08, right on top of the stone and not 300m from the fist fish we hooked up on the Swim bait and the second fish for the day.

Some great fish caught during the bait sessions including these two really big bluefin trevally’s….what beauty´s!

We put the dead baits and very quiet for us while around us all three boats (Veleiro, IBO and Bonica missed one).

Around 10am we decide to put the lures to work north against the current and have a look at VI mile. On the way we get a bite on the Pulsator Marlin Magnet, Greg gets in the chair but then the hook pulls.

Water looked worst and worst as we went north so back on the baits and back to Giants.

Got a skipjack on the plug and live baited and within 4 minutes get a bite and Greg releases a #250.

One a day keeps the Doctor away!!!

Always great to see Carl and the family, awesome to have met Greg and Joanne and it was so nice to have the family come around for a quick visit at the same time and spend some time snorkelling and bait fishing with them…

“Right on, thank you Duarte! Please keep ’em coming! In the meantime here is a little video slideshow using the stills from this report.” – Sean

The 2022 marlin season with FishBazaruto.com is fully booked and well underway. There are however, trips available for the blue marlin bite early next year. The sailfish run in May. And then next year! Book now for 2023 by getting in touch with us right HERE.