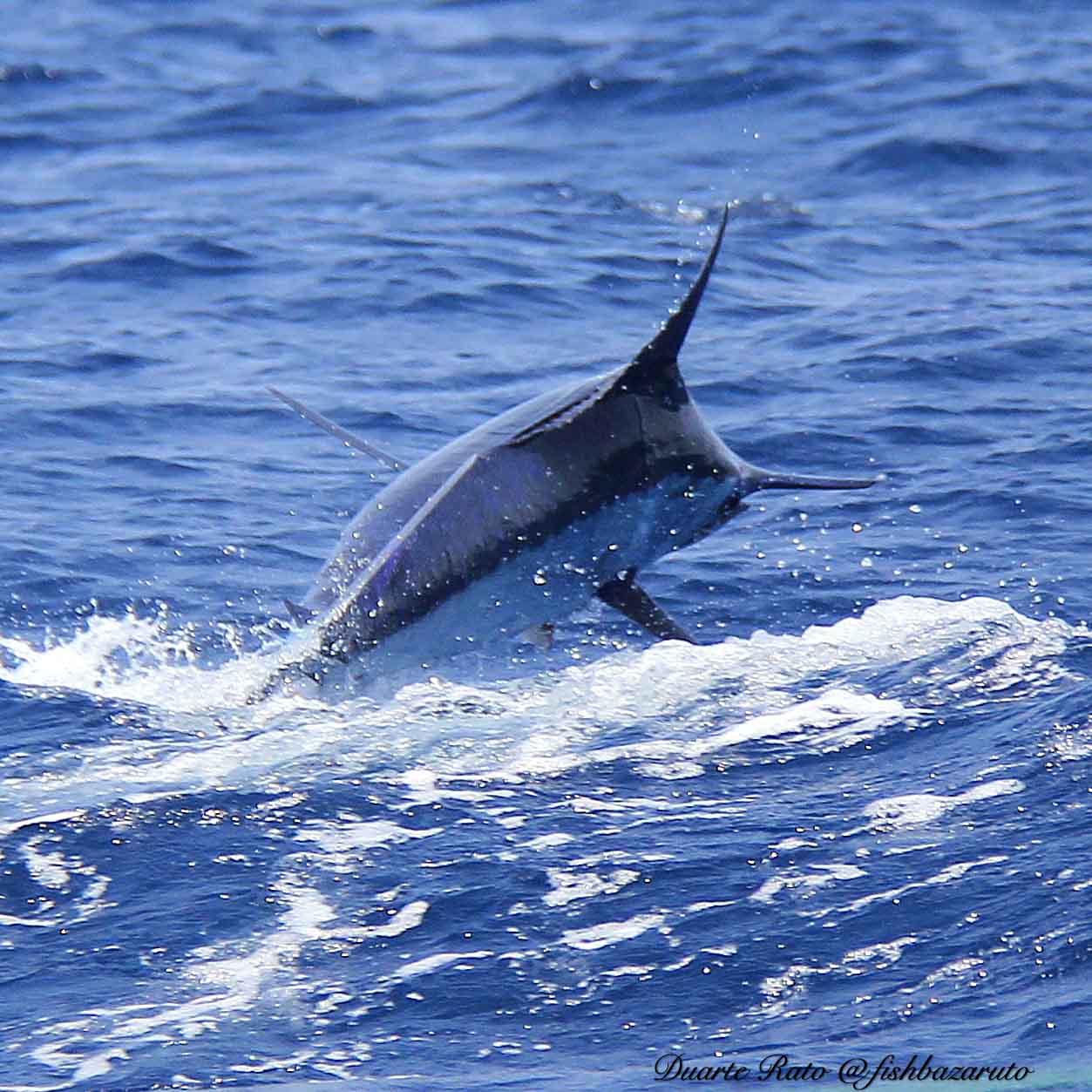 Claus Baelum’s hunt for his first marlin: Claus fished with us us in 2019 and we had a great day with 4 Marlin raised, two bites losing a a #500 Black in very unusual circumstances and releasing a #450 Blue. His son’s friend had caught the Marlin and Claus had lost the one with the double on the rod tip. He then has been on numerous trips to Kenya, Mauritius, etc but his first Marlin still eluded him.

You can see his first trip report & pictures here;

Started Looking for bait but nothing on the inside so set the lures and straight away we got a wahoo for Anders, Claus son.

Then we spotted birds out wide so went in there and as we saw some nice Yellowfin jumping amongst the skipjack, I told the boys to put out the Ahi Pussy on the shotgun and sure enough moments later we got the bite and a nice YFT for Claus.

Anders, who had caught a monster Zambeze shark years earlier with us (as you can see on the report above) wanted to catch another shark…

…so shark fishing we went!

On the first drift the deep bait gets taken and Anders releases a Dusky!

We trolled the lures on a straight tack home and missed a Black that took some string and come off!!!

Second Day – raised 3 but only one bite…

Short bait session at Kings as I wanted to get the tide change and we had some light tackle fun on some big eyes and one big quennie.

Claus was on and we were chasing when the hooks pulled.

This man definitely has some bad luck!

Put the dead baits out just a tad north to where we had the bite at 8h20 we see one about 400 tailing, put the skip bait on its nose but no interest.

Pulled the lures home and had one bite the Magnet from #pulsator lures but no hookup!

The next day we only fished a short morning session as Claus wanted to take the family to paradise Island for some snorkeling!

We looked for bait and hooked a small marlin on the light bait rod on a rapala but it came undone close to the boat…real cute little thing!

Saw a Big fish about 800 pounds cruising on the surface, again as yesterday we put the baits right on top of it but it showed absolutely no interest!

Our good friend Warren fishing on Strenue down south had a good day catching a GT, a small Sailfish and a 200-pound Black Marlin.

Last Day on the hunt for Claus’ first marlin

It was beautiful and flat calm like it has been and my gut feeling was to go and have a look out wide which I had planned with Christiaan on IBO.

However, the whole family had come along and Claus really wanted his wife Riekke to catch a Shark so…

This time it took two drifts until we hooked up, but this time to a much bigger fish.

It was Rikkes first time in the chair and she did an absolutely amazing job standing 40 pounds of drag and bringing a big bull shark for a released in about 45 minutes.

We put the lures after midday and I decided to do a wider tack and in 185 meters of water we got a crash bite once again on the short-left Ruckus and we hooked up.

Crazy wild fish and a lighting first run which put us in the backing even before we could turn and chase.

With Claus’ bad luck no one said a thing…

It took Claus Baelum from Denmark a few good trips to try to catch his first Marlin. He went to Kenya, Mauritius and then with us he finally caught his first Marlin a Blue we estimated at 400 pounds.

Hi 5´s all around and it was a great moment but for me with a little of a sour taste seeing we might have had a much better day if we had gone with my plan of a hunt going wide as opposed to staying in for shark fishing seeing IBO had a crazy day out there releasing 3 Blues to #350, 1 striped and a Black…

A Grand Slam which stories we will tell in a few days.

Anyway, it is what it is and Riekke was elated with her shark and Claus with his first Marlin so happy clients and that’s what it’s all about…

Next time we will get Anders first Marlin!!!

Site and SEO by The Sardine News for FishBazaruto.com.