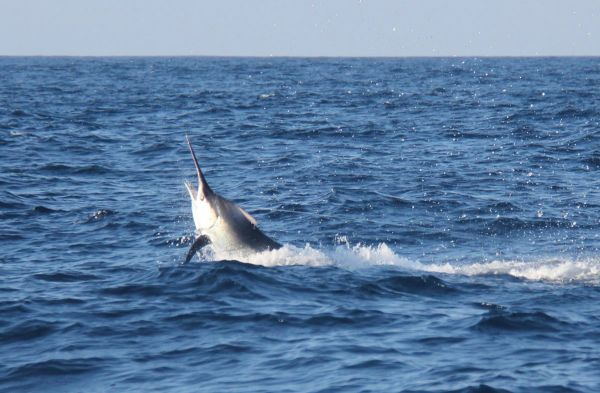 That afternoon we returned to Vilankulos as Kevin had some mates arriving. They did not see anything and seeing the Springboks were playing the All-Blacks the next morning they were having a rest day to watch the game!

Carl still toyed with the idea of leaving after the game but fortunately he decided against it and just after 8 am we started trolling with light tackle shallow of V mile. The water looked much better so our plan was to fish for Blacks with live bait.

I spoke to my boy Alex on VAMIZI who was light tackle fishing with other guests of mine and he said the game fish had been insane in the early morning and between YFT, GT´s, Bonnies, yellowspotted kingfish, bludgers and cuda he had already caught / released over 20 fish.

It did not take long for us to get a YFT, but unfortunately it was badly hooked and after 20 minutes it died on us.

Back shallow and worked north to IV mile were we got a bunch of bonnies and then finally a couple of YFT.

We rigged one and started tacking south with the current. Just after an hour we were at the bottom end of V mile, a place where I have hooked so many big fish that years ago I christened it Giant´s Corner – just then and there the 5-6 kg yellowfin bait was taken.

We fed but I could see the fish had dropped it. We slowly inched the line back and something grabbed and dropped it again. I knew straight away it was a small fish for that bait and told Carl so.

I started pulling the line with my hands and told Carl to get ready to drop.

The fish come the third time and I held the line until I had to let go and told Carl to slowly come up on the drag.

This time we hooked up and Carl got in the chair…

What a great start to the day!
We had planned to do some light jigging and plugging and off we went to VI and IV mile and played around until about 1pm.

But both of us were getting itchy and we decided to put the Konas.

After an hour with no success we decided it was time to go and get another bait, but that was easier said than done – both because the bait was down and nowhere to be seen and when we did find it we were unlucky – pulling hooks on no less than 4 small YFT right by the boat.

At 3pm we decided to put the Konas and started heading back, but we did leave two small halcos and at 15h35 at the top end of II mile we hooked two 5-6 kg YFT and immediately bridled both.

We decided we were going to give it half an hour and started packing the boat!

But all it took was 10 minutes until the long bait was taken, perfect drop and the circle found the corner – hookup!

Carl got on the chair again and again the fish come in pretty easily but this time when it got near the boat it gave us an awesome show with over 15 jumps not more than 20 meters away!

It was a photographers dream, but the fish was changing direction so sharply and so close to the boat that it was almost impossible to shoot anything really decent! I was driving with one hand and taking pics with the other without even looking looking…