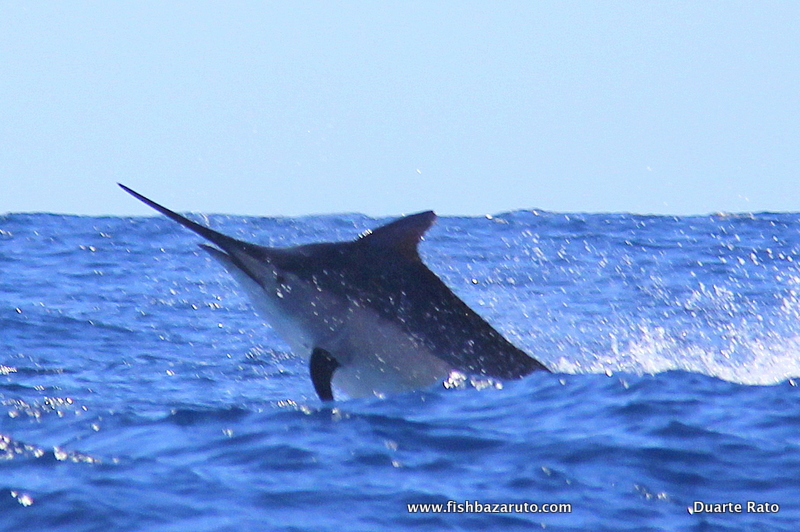 As reported before it’s been a great start to the Season and good fun out there with some good numbers and size of fish in some very nice weather.

This last week was probably the slowest we have had so far but that does not say it was not good. What was strange is the overall absence of bait and game fish and surface activity in the way that Bazaruto normally is. The last few days that accentuate and we think it might have had something to do with the very massive tides we just had.

Even the jigging, spinning and popping guys have been struggling a bit and Gareth Simms was here with us at Anantara guiding David John and his mates and although they got some good GTºs including a very nice one overall, they reported slow and hard conditons.

Late September into early October with had the Osman group fishing in three boats on their first ever deep-sea fishing trip and what a great trip they had. Can see report here;

After the group we started the next day going 1 from 2 on a #300 that took the skip bait which definitely seems to be the flavor of the moment. A couple of other boats had bites but no one connected. We also got a few game fish early morning including some cuta, a wahoo and some bonnies and skipjack.

The next day we had David John taking a break from his popping trip to try and get his son Michael his first fish. It was overcast and a light breeze from the NE.

We had a great start to the day as we put the baits out at 8h30 and at 9h36 we get a hookup, again on the skip bait and the 16-year-old released his first ever Marlin.

After that we had Edward Gilliard from the US for 3 ½ days and things slowed down as the fish where just picking and all small guys until the third day. It was interesting that with this big tide every single day it was really slow in the morning and until just after 1 and every single Marlin bite we had was between 1h30 and 2h30 more or less into the half incoming tide.

The first day we missed two smallish fish, a little guy that tried to eat a rather large live bait and got all wrapped up on the leader. We then had 4 live baits taxed in the space of 20 minutes so switched to lures and missed one on the Ruckus. It was nice to see so many skipjack in the afternoon and we caught as many as we wanted on the spinning rod with the GT ice cream…so much fun on its own.

The next two days where pretty much the same, lots of skipjack lots of taxed baits and each day we missed two small fish including a double, most just picking but also some baits to large for the size fish… 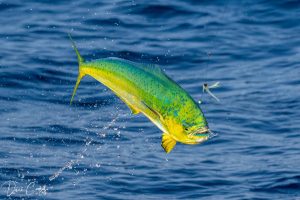 Then on the 8th October some nice finally showed up.

Madness lost one and released a 700 on a lure in the morning. Then it went really quiet for all the three boats fishing. We went back to where we had been seeing all the fish just to find some green water had moved in the area. Ply away do bluer pastures and eventually at 13h40 we have a decent one come and miss the skip bonito three times until on the fourth it gave us a great bite and we hookup. Edward Gilliard finally got his first ever Marlin and a nice one at that we called #500 @ the main picture…

While we were busy both Big Bob and Madness both hooked up and released fish of #400 and #300 respectively.

Then late afternoon after we left Big Bob had another bite and released a #700.

The last day we had a great light tackle session in the morning with some good cuta, quennies, bonnies and kawa kawa and some YFT and then missed a mid-ranger…

…again on the skip bait! 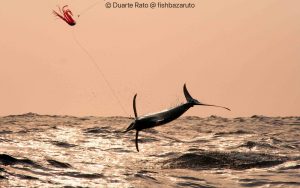