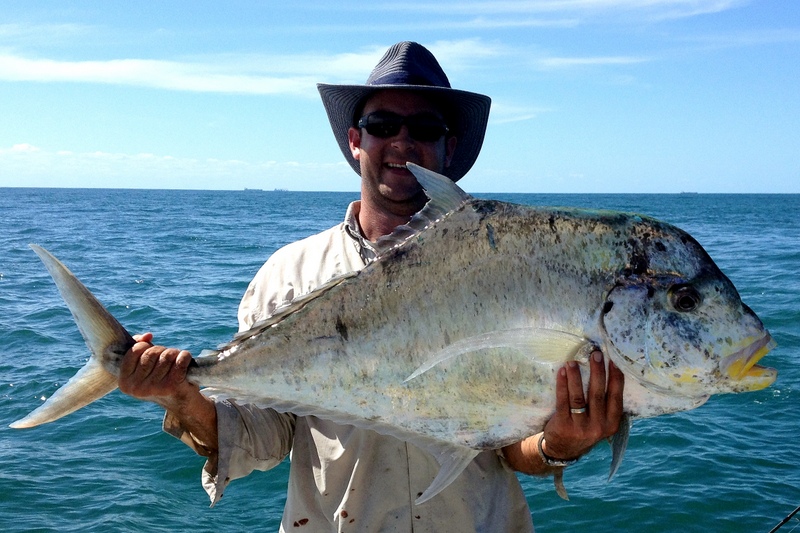 Having fished a lot of Mozambique´s coastline over the last 30 years, I was very surprised to hear about some fantastic light tackle fishing in Mozambique in the most unlikely spot, one of the very few I have never heard of or been eager to fish on this vast coastline.

The city of Beira lies in central Mozambique and is the country´s third largest city. It´s port is an important gateway for the interior of the country as well as the land locked nations of Zimbabwe, Malawi and Zambia. Being where the Pungwe River meets the Indian Ocean and fairly south of the Zambezi river mouth, I always remember it, when I visited the city or sailed past it, has a murky brownish water kind of place and it never appealed to me. But, what I learned recently is that it´s far off fishing grounds hold an amazing light tackle fishing Mozambique.

A few years back, a Zimbabwean chap named Rob had spoken to me about it. But, it was only recently, when Justin Jahne got in touch and we started exchanging emails, reports and photographs that I realized the enormous light tackle and fly fishing potential this area holds.

The area as very little recreational angling pressure with about 10 small resident ski boats and a few anglers periodically coming from Zimbabwe to fish it. However, those who regularly fish it say they regularly catch ten or more species and over 40 and even 50 game fish in a single day. From what I have seen the vast majority of game fish compromise of a lot of small to medium size GT´s, golden trevally, yellowspotted kingfish, indian mirror fish, talang queenfish, prodigal son, king and queen mackerel, yellowfin tuna, bonnies, massive springer´s, barracuda, Malabar rockcod´s and other´s.

The fishing grounds are mostly between 25 to 30 NM, but it´s fairly shallow and rarely over 38 meters all the way out to the shelf that sits about 60 miles offshore.

Justin tells me they have a fantastic Yellowfin Tuna run between May to September, with fish around the 20 to 30 kg mark which they mostly target on plug with assorted poppers and GT ice creams, but also on fly. Over the peak summer months, they get ridiculous amounts of Kind mackerel (AKA cuda) and GT´s of all sizes but with a lot of juveniles. After that and when the water cools down the queen mackerel come in in massive numbers. Of course, then are the other species mention above that are present year-round or come in at one time or another.

Just to give you an example last month Justin had some mates from Zambia and Tanzania come down to fish a couple of days. Between the two boats and mostly plugging and drop shooting as well as a few on fly they got about 140 game fish. The vast majority where Queen and King mackerel and GT´s, but as you can see by the photos a good number of some other species as well.

Remembering that murky water and thinking of Zambezi´s (bull sharks) one of the very first questions I had was how bad was the shark problem there to which Justin replied that in all the years he has fished it he was only taxed twice – adding that the water is normally pretty clean from 20 miles offshore and that he as actually had more fish taken by dolphins than sharks!

What actually got Justin to contact me in the first place is his belief that the area offshore where the shelf ends holds good potential for billfish but to this day no one he knows of as made the long run out there. They see a good number of Juvenile blacks in the 30 to 100-pound range in the shallow water´s they normally fish along with a fair number of sailfish. He says the problem they have in targeting those small Black´s while trolling is that the cuda continuously keep destroying their baits – what a problem to have 😉

They planning to do a few trips to the shelf soon to try and source out the billfish potential. I am really interested to know how they do, in this area which had never even remotely attracted my attention.

Mozambique surely has an amazing coastline, most of it untouched and as far as recreational fishing goes vastly unexplored. Having lived and fished here all my life how cool is it to hear about area´s with such potential one has never heard of before!