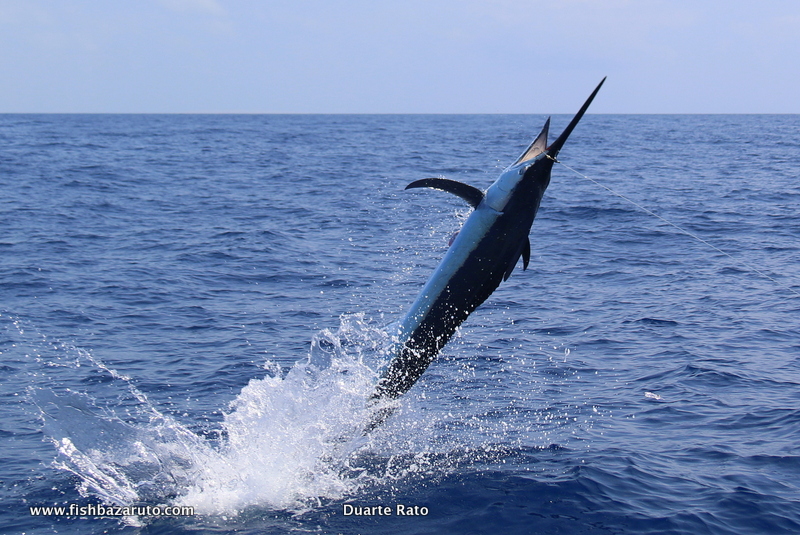 5 for 4 Black Marlin for Carl Jankowitz

We had our good friend and regular at Bazaruto, Carl Jankowitz over the last few days and he caught 4 Black Marlin out of 5 bites in his four fishing days in flat calm conditions.

Fishing has been hard especially due to the fact that the game fish and bait are hard to see and there is very little surface activity, which as those who regularly fish here know is very uncommon. We had a very sudden drop in water temperature about a ten days ago and since then it´s gone fairly quiet. But, if you catching a Marlin a day along with some other gamefish can´t really complain! What we did complain is that having such an outstanding hookup ratio at the moment, the only real nice fish we saw which we estimated at 7-800 pounds missed the lure altogether. Yeah, so far most of the fish we seeing are on the smaller scale around 200 pounds and the big girls are late this year, but I am sure they will come knocking anytime now!

Seeing Carl come with his family and close family friend´s, the Richardson´s the first three days where spent Island hoping with a bit of spinning here and there. We even had a beautiful 10 kilo Black come after a onda onda spoon three times in 8 meters of water out of Paradise Island – where we were catching queenies for swim baits! On the 30th we did go out there but the young boys felt a tad sea sick and we had to make a very early return.

Carl´s first fishing day was on the 2nd October and we were greeted by flat calm seas, sunny sky and blue water in the 24.5c region….those conditions persisted for the next three days although the water did come up to 25.4c and on the last day it become very patchy!

Anyway, after our customary plugging session in the morning, with the lack of bait, we decided to head out wide and work around the 4-600 meter lines. It looked absolutely beautiful out there with some skipjack schools, lots of current lines, warmer water and some frigates. Despite that we never raised one and after noon decided to work back shallow to fish the Canyon´s northern edge with the incoming tide. It was a good decision and in the afternoon, we finally found a fish that appeared and followed the SR Pulsator Marlin magnet for ages before getting stuck. Carl got in the chair and made small work of it for the release at about 200 pounds. Got a few skipjack on the way home…

The next day we decided to go and have a look at the other side and started at V mile and worked north with the plugs and feather to catch some bait. It took a while but eventually we got a skipjack outside 9-mile which we baited but got chopped off by a wahoo half an hour later. We then went for a plugging session at the reef but despite there being lots of showings, queenies and fusiliers on the surface all was quiet.

We decided to put the lures out and work our way south as the water was patchy and there where absolutely no signs of life around. Finally, after two hours heading south we finally found some good-looking water which was half a degree warmer outside sharkville. We saw a free jumper and started to work the area. Finally, we found one which we released about the same size as yesterday´s fish. With a sense of mission accomplished we made our way back to II mile and back to the Island.

The plan for the 4th was to head out wide as it looked so good out there two days before. We set the lures outside Sharkville worked the area a bit and started heading south. When I got to the northern edge of the Canyon and seeing such good-looking water, after having a chat to Carl decided to abort the plan to go wide and pressed further south to work outside Best and then the South and North Canyon side with the incoming in the afternoon. The lures where working perfect in the flat calm seas and, as it happens, out of the Blue a bomb exploded on the short-left lure, the Wrigler by Pulsator. A really good fish looking about 7-800 come from the outside, shoulders out the water but missed the lure completely. We kept on the same tack for a good while, but finally I decided to turn to go back to the area and has I did so she come on the inside long knocked it out the rigger but that was it. We been pulling lures a lot due to the lack of bait and seeing the fish have been spread out. But most of all because our hook-up ratio has been phenomenal the last couple weeks going 9 for 11 on the lures so far. Unfortunately, this one, the biggest fish we have seen so far, this season, just wasn’t one that found steel. We worked the area for a good while and then went to best to try and get some bait. We picked up two skipjack but they were both badly hooked so we persisted with the lures. Mid-morning, we found another out of the 200-pound mold that took the long rigger express which we quickly released. We moved back to the Canyon on the incoming and found a floating plastic box that had evidently been out at sea for a long time. Around it where dorado, YFT, wahoo, small sharks, triple tail and some other critters. We stopped and had some fun on the light spinning tackle, got 3 dorado and 2 YFT for the table but when we got a beautiful 2 kg YFT we could not resist and put it in the tubes and drove away. We live baited it on the northern side of the canyon but after an hour it was sharked and Carl released a #250 hammerhead. On the way back home we again caught a couple skipjack.

Carl´s last day was yesterday, the 5th of October and we again decided to head south. Although there was still no wind and the sea was still calm the swell had come up immensely. We worked until Best and went into the reef to get a bait. We got two 6-8 kg YFT and live baited one for an hour working south with the current. We then went into Marlin pinnacle and worked the lures all the way to wahoo.com. Halfway back there goes the express and we hook-up to a lively fish that put on great acrobatics. This was the smallest fish Carl released for the trip but with lots of testosterone. We also got a dorado and some skipjack as we made our way to Best for a jigging session. However, the light tackle we were using was no match for the kingies we were hooking and we could just not stop them from reefing us…good fun anyway. The water color had now gonne patchy and absolutely horrible in some places. We pulled lures for a while but decided to pack it up early and go for some light tackle on the Gap where we released a couple small kingies.

We have a lay day today but back at it tomorrow…

One thought on “5 for 4 Black Marlin for Carl Jankowitz”