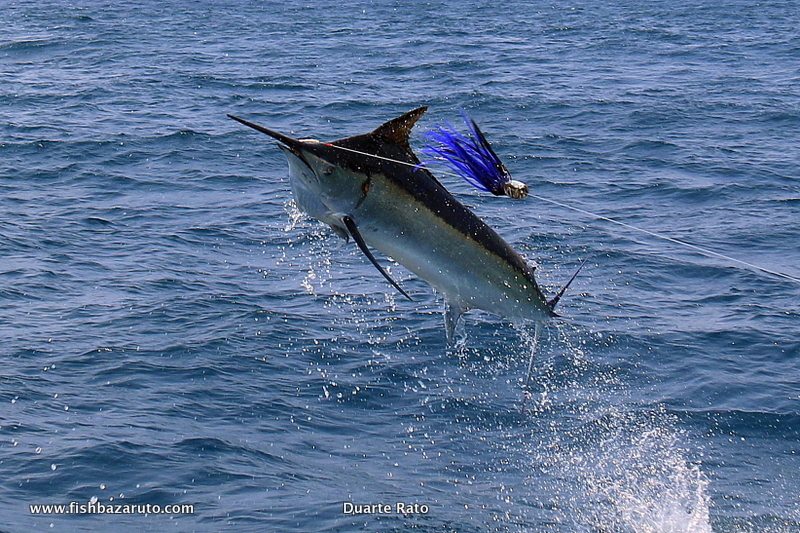 Although things slowed down the last few days we still had a great week of fishing with Craig who come to Bazaruto as a billfish virgin and left with a Black and a Blue Marlin release, his biggest wahoo to date – close to 30 kilos (he actually broke his personal existing record on a daily basis), a bunch of YFT, cuda, bonnies and some other game fish.

Here´s a small report and some pictures for the week;

We had Craig Sherrah and his girlfriend Ruth Vorster arrive from West Australia (they actually did a week in cape Town before getting to Bazaruto) on the 17th September.

The next day was forecasted a light easterly wind and calm seas so we made our way out in the morning and upon arriving at V-mile reef where greeted with huge light tackle game fish action and got/released a dozen gamefish or so in the morning including Cuda, yellowfin tuna, bonnies and queenfish. Later we tried for Marlin but out live bait was taxed and pulled lures for a couple hours but it was quiet except for a boil on the short corner lure.

We ended the day at lighthouse reef and got 4 kingies and 4 queenies on the light spinning tackle gear…great fun and stock up on bait!

Except for the game fish mayhem inshore it looked much quieter out there than the previous two weeks. Hardly surprising seeing although rare, the Easterly wind at Bazaruto is an absolute disaster and keeps the fish lockjaw. We don´t call it Beasterly Easterly for nothing, thank God we don’t get much of it!

We had a break the next day but where out there on the 20th with a light southerly wind. It started slow but then we found the bait out of IV-mile reef and had an action-packed day. We first got a nice wahoo, Craig´s biggest to date and then started getting football size (6-10 kg) yellowfin one after the other. We live baited them but got taxed either by the man in grey suits of by some beast wahoo´s. But it was not difficult to get bait so we persisted for most of the day. Craig got to practice the chair with some Bull and hammerhead sharks and it was all good fun. However, after so many baits we decided to set up the lures. Good call as in thirty minutes we got a crash bite on the Short Corner Wriggler by Pulsator and Craig, who for a first timer, did a brilliant job in the chair, brought in the fish fir his first ever billfish release. Not before the Black Marlin gave us an awesome jumping show by the boat and on the leader!

Craig’s own record Wahoo. These things dominate out at Baz on some days

The taxman features quite high up in the food chain around Bazaruto. Luckily the lure came back on this luckless YFT!

Active fish this one!

And another great release!

Taking the greyhound to a new level!

The next day was the first windy day we have had in the last couple of weeks and it was pretty slow out there for all 4 boats fishing. The guys down south did a tad better and got some wahoo and YFT. Scott Lupien and his clients had arrived the previous day and I had them fish with Christian on the Game Changer and they were the only boat to see a Marlin on the day. A #250 Black that took a lure but unfortunately through the hooks. It was uncomfortable and we decided to make a short day out of it.

We decided to run south on the 22nd and although we failed to raise any Marlin we got some good gamefish including three large wahoo and Craig beat his own wahoo record again with a fish close to 30 kilos. Christian who had our other guests on Game Changer made a good call and went out wide. First they had two fish up and hooked a nice one of about 600 pounds on the Zulu Impy by Big T, unfortunately they pulled the hooks on this fish after a long run and the second fish never struck. Later they raised another, again on the Zulu, but after missing the lure twice it faded back and crashed the long right Marlin magnet by Pulsator and hooked up and the guys released their first Marlin, a blue around #350.

Morgan on Sailfish had really hard luck and missed a bite on a live bait in the morning, then raised a small one on a lure that did not bite and in the afternoon had a 400-pound Black take the long corner Ruckus but it also come undone.

Our last day with Craig was yesterday, the 23rd of September and this guy really deserved another fish. Conditions where far from the previous weeks where there was bait and game fish everywhere but he never lost faith and watched those baits and lures like a hawk. After about two hours looking for bait in the early Morning but only catching another big wahoo I decided to go wide. It was a good call as all the boats inshore had a very quiet day.

It was beautiful flat caml out there and we worked around some skipjack school´s in about 280 meters of water for about an hour to no avail so we went deeper to the Blue spot of the canyon. The water come up by a degree when we reached the 450-meter mark so we worked that area hard for a couple hours. Finally, a fish come knocking, this time on the old faithful express on the long left. It come out the rigger and the fish followed it for a while, bill out the water. The boys teased it nicely and she crashed on it and we hooked up. Fast run with lots of jumps around in a circle as blues do. Craig did a brilliant job picking up line and we had the 350 pounder alongside for a release in about 12 minutes.

Really cool way to finish off the charter and despite the slower fishing this week Craig still got a Black and a Blue and a bunch of excellent wahoo and some other game fish. Not too shabby for sure and already planning to get back here in 2018!!! See you then mate…

For the 5 days we had humpbacks all over the show, probably seeing over 50 a day and some very epic breaching´s…also loads of big schools of spinner dolphins out there with some common and bottlenose out wide. Really exciting for the guys to have all this activity around.

The wahoo bite has been red hot for over a month now and some really good fish in excess of 30 kilos being caught regularly. Craig with one that was just shy of 30 kilos but still his biggest to date!

Blue Marlin about to be released aboard Vamizi out of the bazaruto Archipelago.

Small Black Marlin in the 80 to 200-pound range have been abundant and finally some of the bigger fish are starting to show. The big girls will be here any time now!

After some proper guidance and practice on a few Bull and hammerhard sharks Craig took to the chair like a pro and made short work of the Black and Blue Marlin he released on his visit to Bazaruto.

Oil change day today and next up we got Gary and Joode Goltz and Sven and Lorie from the States starting tomorrow.

Elsewhere, Capt. Bill Billson on the Viking II had a great start to the season on the GBR, weighing a 1 117 lbs black that died on them on them. This is the first grander for the GBR season and the 6th for the year. Really short fat fish with a measurement of 135 x 78.

Read more Captain’s Blogs (from way back as far as 2011!) at this link: https://fishbazaruto.com/captains-log/