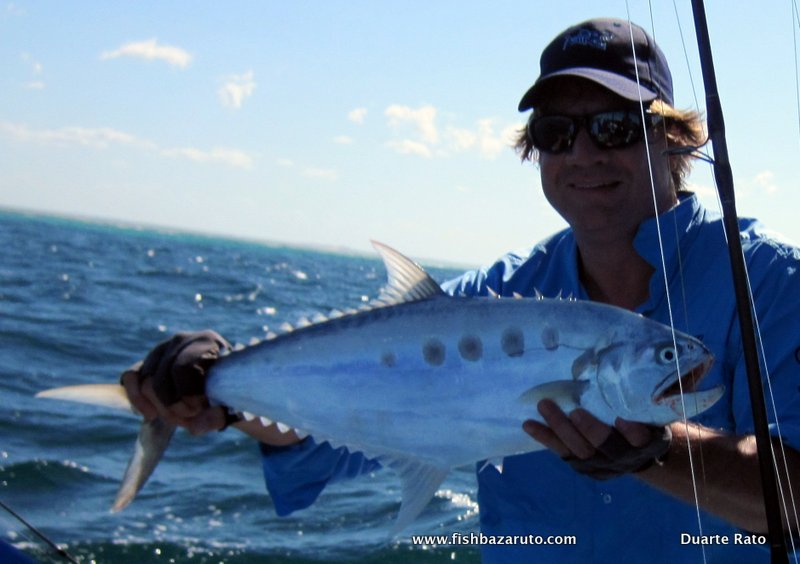 Durban boys making the most of a slow bite @ Bazaruto

Therapy in the shallows after a hard days tussling with huge GT’s and the like. Bazaruto Island with Captain Duarte Rato. Value!

Bjorn, Solly, Chad, Martin and Edgar joined us for a few days fishing off the bazaruto Archipelago this last few weeks. We were all in great anticipation as the fishing as been superb with lots the ocean being alive with baitfish and lots of big cuda, yellowfin, GT´s and other species being caught. However a weather change at the beginning of the week put the fish off the bite and the guys experienced some slower than usual fishing – but Bazaruto always delivers and they had a great time.

First bite on the first day was a huge, probably 30kg plus GT that Bjorn hooked on a Bobara, unfortunately the #50 braid was not enough to stop this fish and after a brief fight it cut us off. We then released a smaller GT, some snoek, cuda, wahoo, queenfish and some reef species. The next day we got some cuda, snoek and bonnies on the spinning tackle, a nice dorado on a jube jube live bait, some YFT on rappies and the highlight of the day was hooking a 150 pound Black Marlin on a jube jube live bait on a cuda trace. Solly had a awesome fight on the TLD 30 tackle but unluckily the fish spit the hooks as it jumped right by the boat. Third day was slower as we decided to go north and found some green pea soup, we did hook another monster GT, this time on a 3 kg jobfish live bait intended for a big cuda but could not stop it. We caught some other smaller live bait and got some cuda and a shark and the boys then had some action on a lot of queenfish, garfish and some other smaller species. The weather was supposed to blow us out on the last day so the boys decided we should rather go and enjoy a braii at Magaruque Island. We left just after 9am and decided to just have a quick spinning session before hopping on the island. What followed was 2 hour of absolute light tackle insanity with queen mackerel. We must have had more than 40 chases, lots of cut off´s and ended up releasing 12 snoek and 2 bonito´s. The trip was finished in a BIG way with a delicious braai and a few dops on the Island!

Thanks for the great time boys!