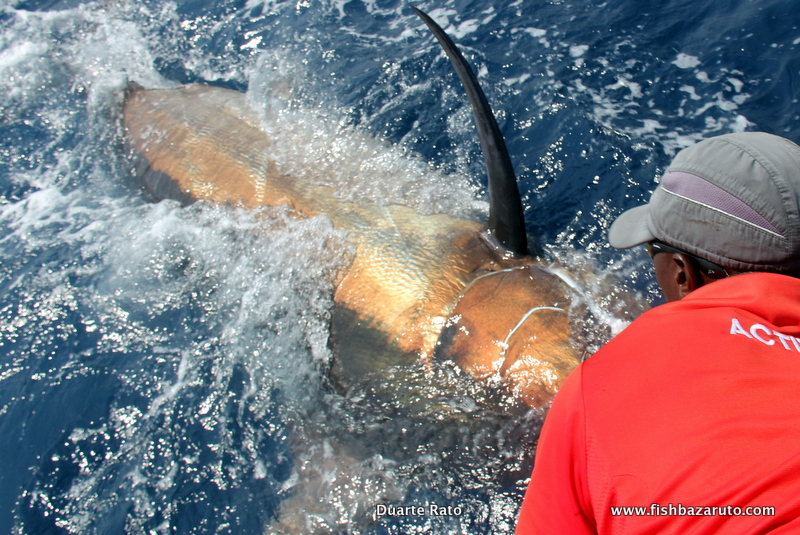 It´s been a good downtime – awesome holiday with the family and finalizing most of the bookings for the season @ Cape Verde & Bazaruto Fishing. But, itching and really looking forward to getting out there in a couple of weeks.

Although we already almost fully booked for the peak Marlin Season there´s still a couple slots available from March to April, in August and at the beginning & end of the Marlin Season. So come join us for some Bazaruto Fishing!

We have a number of slots still available from early March to the first week in May and offering packages to fish either based out of Vilankulos on the mainland or out of Anantara Resort on Bazaruto Island during this time.

The Archipelago is normally blessed with great weather during time which is also one of the best to target GT´s on poppers and stick baits. Most of our guests that come and fish in this time of the year choose to combine light tackle conventional trolling with plugging for GT´s, light tackle spinning, jigging and drop shot. It is also one of the best time´s to do some saltwater fly-fishing for a vast number of game fish.

Although it´s outside the historical big Black Marlin Season those who have, in the past, target Marlin with us during this time have had good success on both Blacks and Blues. With the water temperature being around the 26-27c range and normally loads of bait size YFT and bonito there is no reason for them not to be around. We have had charters during this time which averaged better than a fish a day. Not only small to medium size fish either and our biggest fish released in March was a solid 800-pound Black and a few years back we got an estimated Grander during the first week of May. At the end of this period we should also see the arrival of good pods of sailfish for their winter run.

Between mid-May to July we will be fishing the famous Blue Marlin waters of the Cape Verde Islands. As most of you would know this is the World´s premier place for numbers of Blues with some really large fish well over the magical grander mark mixed in as well.

It´s not only that the numbers of Blues are ridiculous but targeting those fish on bait & Switch is a truly unforgettable experience.

We will be fishing out from Vilankulos from late July to the first week of September. Last year we had phenomenal calm weather and one of the best game fish run´s we have experienced in years, with days where we released in excess of 40 game fish, consisting mostly of wahoo and yellowfin tuna. The wahoo run during this time was absolutely phenomenal the last two years, with full house strikes on fish ranging from 10 to 25 kg being the norm.

What makes this a really exciting time is that it is also a great time to make the most of the sailfish winter run, either targeting them exclusively or as a by-catch when game fishing.

This is also when the humpback whales are all over and it´s common to see dozens on a single fishing day.

*** We still have three week slots availability for August.

This is the time of the year we all anxiously wait for, the best time for numbers but most importantly to hookup to a Giant Black Marlin of gargantuan size.

We already fully booked all the way from the 18th September to the 8th of December but do have our second boat with a lot of availability during peak time.

On VAMIZI we still have two slots available at the beginning and end of the season. Of course, being on the edge of the season they are not has reliable as the peak but depending on the year good Marlin fishing can be had then. I normally advise and most of the guests I get for this time want to Marlin fish but also interested in mixing it up a tad; plugging for Gt´s, light tackle game fish and just ready to change and make the most of it if the Marlin bite is on the slow side.

Last few years we have had outstanding GT fishing and it´s normally a time when the ocean is alive and one can target all the species that start arriving on the archipelago as the water warms up. December is known as a peak time for GT fishing and some years, when the water stay´s cool later on, we have caught our biggest Marlin of the season then.

The available dates are anytime between;

A great fishing year to you all….