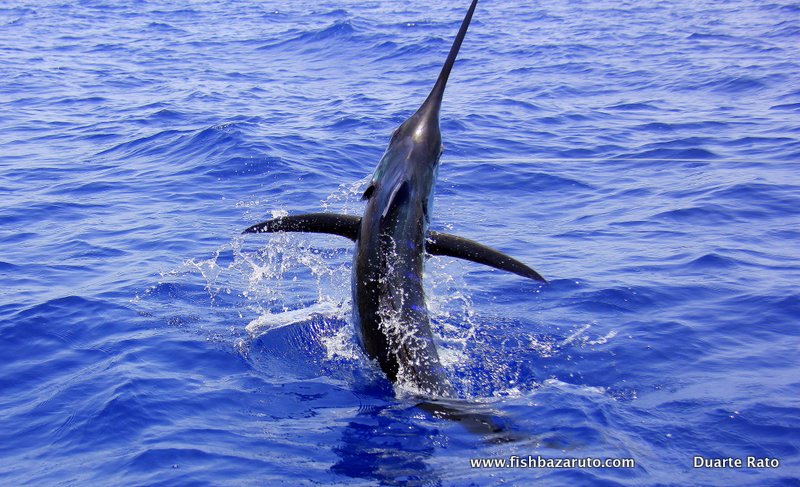 Aloha everyone & warm greetings from Bazaruto,

As per my previous report exceedingly warm waters pushing over 30c moved on to the archipelago in mid January. This obviously affected the fishing, especially offshore, where the numbers of Bill and game fish were not has consistent. However the inshore fishing was pretty good with a large variety of species for the spinning brigade and has is normal this time of year, excellent GT fishing was had by those casting poppers & stick baits on the reefs.

By late February conditions started improving offshore. There were loads of skipjack schools and a few YFT and the odd billfish found amongst them. But, lure-terrorizing wahoo were by far the most common species attacking and most times destroying the lures – but obviously providing excellent excitement.

When the Marlin fishing get´s tough and our guests just want to experience fighting a massive fish on heavy tackle with exceedingly high drag´s catching big sharks is guaranteed anytime of the year. It is so good that guest´s from all over the World specifically visit Bazaruto to target them. Over this period of slower offshore fishing we released a good number of huge zambeze´s (bull´s) along with some java´s, blackfin´s, dusky´s, scalloped hammerhead´s and other´s.

Into early March it started improving even better, especially down south by the Linene banks. There was a good diversity of species caught on the small jig´s and drop shoot and large schools of small bonito´s (Jube Jube´s) could be seen around the main pinnacles. Catching these on small feather daisy chains and spoons and then rigging them live on a steel wire trace proved to be deadly on a good number of school and crocodile cuda (Kind mackerel). Great fun on the light tackle we were using!

At the same time school and decent size Yellowfin Tuna started to mix in with the vast amount of skipjack schools offshore. This provided the first real fast action offshore for the last couple months. As is normal with tuna, when the schools were found multiple and full house strikes were the norm. We had some real fun on those days when they were thick – our angler´s were doing the tuna waltz around the deck as they fought various tuna simultaneously.

By the second week of March I went to Dubai to order a boat for a local resort and also attended the International Dubai Boat show that was a real eye opener and a great experience.

The boys did not have many charters for the time but reported continued great spinning inshore along with good number´s of cuda and yellowfin offshore. Most importantly and although not yet in great numbers, some early season sailfish pods also made an appearance, with a few being released all the way from Baz to Linene lighthouse down south.

The last two week´s finally saw a slight decrease in water temperature and much better action offshore, basically the same as the last few weeks but just much faster. School but also good sized Yellowfin Tuna mixing it up with the skipjack school´s provided great fun on fish up to 40 kg. There as also been some great cuda fishing in shallower. Spinning, plugging and jigging / dropshot have also seen a better bite the last few days with a good number of species such as green jobfish, rainbow runners, queenfish and the various kingfish (trevally) species on the bite.

Boats have also come across some sailfish pods and even a few Marlin were seen and released this last week putting everyone on their toes as we might have a surprisingly good Marlin run when the water starts to come down to around 26c-27c, which should be anytime soon.

The Blue Marlin bite down south at Inhaca is still absolutely mind blowing with some boats consistently having over 6 bites a day. Nakisai won the last two one day tournament in mid and the late March with two blues each time. The last tournament saw the first four boats release two blues each and Nana actually went 3 or 5 releasing an amazing 3 Blues out of a triple-header (one fish was disqualified).