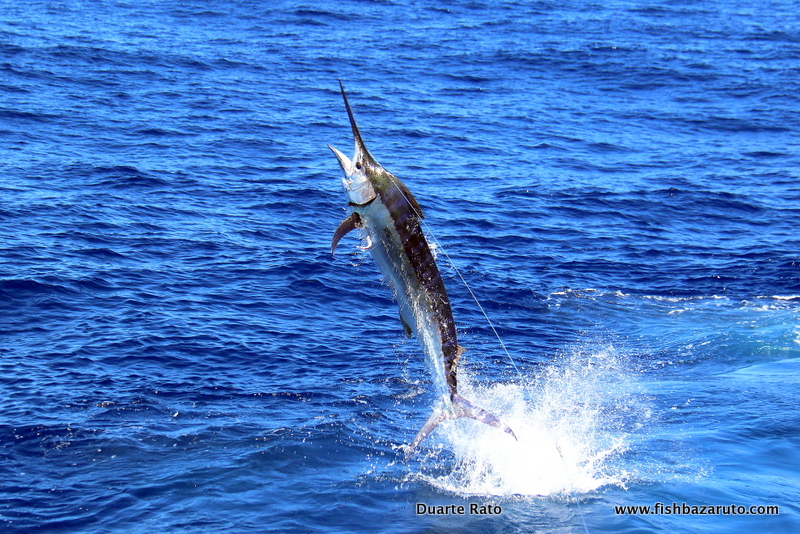 It’s been a long 3 months away from home fishing the bountiful Blue Marlin waters of Cape Verde and Madeira Island. But, has awesome as it was, it´s also great being back home, seeing Gretha and the kids and fishing the Bazaruto Archipelago again, as we had some Clients from Vilanculos fishing as soon as we got back.

From what we experienced until we left in early May, to the reports we got while away to what we found when we got back, it´s been an absolute gem of a fishing year out of Vilankulos and the Bazaruto Archipelago thus far. With the water temperature well above average, there has been some really good fishing for all kinds of species and the few boats that have put some time for Marlin fishing have had a good bite throughout.

We have reported how hot the Marlin bite, for both Blues and Black´s, was from March all the way to early May before we left. Well, it did not stop there and the guys, mostly fishing for sailfish reported hooking up to Black Marlin frequently all the way to early June and then from late July until now. Although most fish are in the smaller size range, there were also some good size fish hooked which, mostly translated to heartbroken stories of long fights with big fish lost on the game and sailfish light tackle being used.

And then, and right up to now, every time (which has been rare) a boat ventures out wide it finds some good Blue Marlin action as well. This does not seem to be a fluke as it has been happening every winter for the last three or four years, well, since we started venturing out there this time of the year. Most recently the two boats that went wide found water in the high 24c range and Sailfish released a #350 Blue as well as a sailfish on their outing and a few days later Salty Dog released a #400 Blue. It certainly seems that Blue Marlin fishing can be good throw-out the year on the archipelago and even into “the relative” colder winter months. Actually, the best ever Blue Marlin fishing day we have experienced on the Archipelago was in July!

But, as we all know the fishing on the Archipelago is much more than Marlin and there has been superb action all across. The GT fishing in particular has been hot with good numbers of quality fish right from the normally best summer months up to now. There has also been a large abundance of bludger and yellowspot kingfish and many other species to be caught on drop-shot, jigging and spinning. As usual winter also produced the best numbers of sailfish and a great wahoo run. Yellowfin tuna have also been around and in better average sizes than normal and, most likely due to the water temperature, skipjack tuna (AKA Marlin candy!) have forgotten to look at the calendar and have been present in huge numbers all along.

Having just gotten back and been out the last few days chartering aboard the 38ft Game Changer fishing from Vilankulos it was amazing to see the conditions at this time of the year. We found beautiful electric blue water ranging between 24.7c to 25.1c which we only normally get towards the end of September. Although the fish where not really hot on the bite die to the low pressure, the amount of bait, especially jube jube´s and skipjack´s is phenomenal. Most of all what is really nice to see and has not been the usual trend the last few years is the low-pressure system´s moving in so early, which from my 17 years’ experience here is very good for the heavy tackle season to come!

We mostly targeted game fish and found some good YFT up to 35 – 40 kilos. The day before our last Guy Ferguson who was fishing on Sea Cruise told me they released a 220-pound Black Marlin in shallow water on a small jube jube intended for cuda. Apparently, the bait had only been in the water for a couple of minutes.

The next day we left Vilankulos and braved it out there and I decided to put some big lures / ballyhoo combos on the riggers and within 10 minutes we had a fish come on the right and after a short drop we hooked up to a feisty little Black about 120 pounds which was Mr. Hu first ever billfish. About 30 minutes later we had another strike and hooked, this time on the SG wide range, up to a similar size Black which unfortunately pulled the hooks. By then the SE windy was pumping 25+ and there was some heavy rain moving in so we decided to up lines and run for shelter. But 1 for 2 on Black Marlin in 2 ½ hours of fishing in early August is pretty cool and motivating. We still had a great barbecue by Magaruque Island and where back home by 1pm. Then a few days later Drop Your Rods caught another small Black and there´s still a few sailfish around as well.

I might be wrong, but if these conditions persist I think we in for a good and early Heavy Tackle Marlin Season on off the Bazaruto Archipelago.

We will be fishing here and there for the next month, but not solidly and now it´s time to get boat and tackle ready until we start fishing solid back to back from early September to mid-December.

We already full until the end of the year but have started taking bookings for 2018. We have decided to stay here throughout the year and have created some really attractive packages fishing from Vilankulos and Bazaruto. Please contact us for package rates, details and any other information.

Last but not least I never reported the awesome Blue Marlin fishing we had in Madeira aboard Peter Bristow´s Katherine B in early July. It was an awesome time and was great to see Peter after 5 years, we got to release some great fish up to 850 pounds, had some delicious meals at one of my favorite restaurants “Viola” and it was just a grand time altogether! Can´t wait to get back…