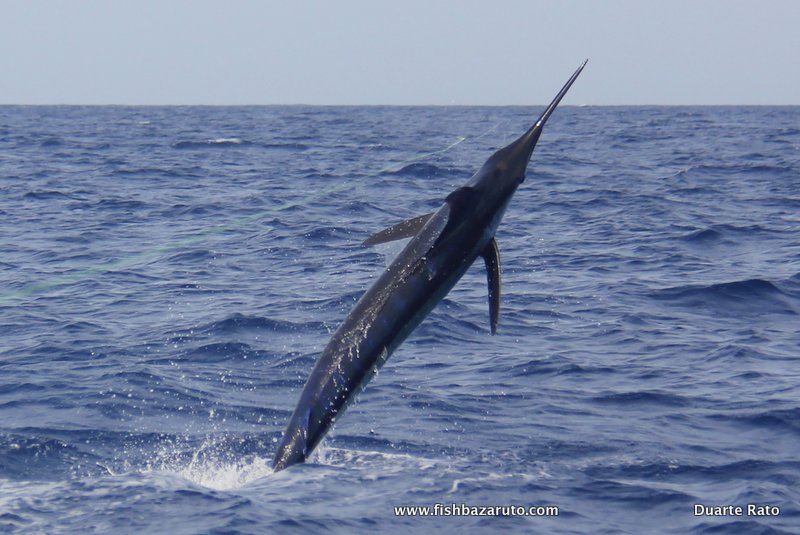 As it always does last month obviously started with 4th of July fever, but I have already reported this year´s Blue Marlin Word Cup elsewhere…

After what we can call a very chilly (by Mozambique standards anyway) but very short winter, the water started warming up by the second week in July and it´s come up a solid two degrees since – you don´t need to be a brain surgeon to know what this has done to the fishing! Just wish that it had started a tad earlier to provide better conditions for the World Cup, but by any means it´s starting real early and everything from weather patterns, winds, water temperature and abundance of some species suggests a real early one this year….BRING IT ON!

As soon as this turn around happen by early to mid July the very few boats that went out wide had startlingly good results especially on Blue Marlin, but not only!

On the 18th of July Trinity, a 58ft Bertram got a very rare Grand Slam, with what is consider the least common billfish species on the Archipelago.

Capt. Steve Andrews, who having previously done two seasons on the archipelago and thus no stranger to these waters, was on his way south doing a delivery from Tanzania to South Africa. Seeing they obviously had to come via Bazaruto they decided to stop and fish here for a few days. But before they got here and just north of the Archipelago they got into a real good bite.

At the time, Steve´s only companion on the trip was Mark and together they went 3 for 3 on Blue Marlin, 2 for 2 on Broadbill and 1 for 1 on short bill spearfish in two days. Thus achieving a grand slam of a 40 kg Broadbill, a 16 kg Shortbill spearfish and a 750-pound Blue Marlin in a single 24-hour period.

Mark was obviously the angler and caught all the fish standing up.

Congrats to them on a truly great achievement…

A few days later Jayson also had a good day out there going 1 for 3 on Blues with a 300 pounder. And besides the Blues there was good action out there with some dorado, loads of skipjack and a few wahoo.

It´s such a pity no one is really putting more effort out wide as most clients this time of year and not knowing that this place can produce Marlin year round opt to fish light tackle and the likes!

During this bite in mid July I was away finalizing the purchasing of BahiaMar´s new 35 ft boat. But the week before and fishing out of Vilankulos we had a few light tackle charters that produced some good game fish as well as some spinning light tackle sessions up north and in magaruque that produced some good fishing with some small GT´s and other kingies, quennies and the other usual reef dwellers!

While I was away we had Kurt Larsen from Florida on the Island fishing with the boys and he reported having a great time with Alex & Americo. Fishing conventional light tackle trolling they had good action thought out catching and releasing loads of Yellowfin Tuna, several trevally (kingies) including a lot of bludgers, green jobfish, bonito, king mackerel and queenfish. They also had a Black marlin come into the spread but not finding anything suitable enough to produce a strike.

That´s a really big Malabar caught by Riaz Karodia on the infamous III trees area o northern Bazaruto. On the right Americo posing with another Bludger Kingfish for Kurt Larson aboard Vamizi.

By mid to the end of July things just got better. With water looking absolutely gorgeous and already close to 25c and rising, lots of good bait especially jube jube´s and skipjack the fishing as been red hot the last few weeks. This is especially true down south and boats fishing out of Vilankulos have been having a great time with the arrival of large number of good size wahoo, some Yellowfin Tuna, lots and good size King mackerel and loads of bonito and Kawa Kawa. And although it has not been has consistent as June there as been a few sailfish here and there along with some small Blacks. Unfortunately no one has really put a good effort out wide for Blues and big YFT.

Like I mentioned before it´s all looking real good and very positive on a good and early Season. This is the time when everyone is hyped up getting all the heavy gear ready to go. In a couple of weeks we should see good catches of small Blacks and by early September the first big girls should start to show up. September is a great all round month, normally with excellent wahoo and yellowfin tuna fishing. The last three September´s have also produced us the biggest GT´s for the year including some good fish over 30 kg´s and last year 45kg…and of course Big Blacks! We still have some dates available before the third week of September fishing out of Vilankulos, so contact us if you interested! Then we off to the Island and it´s flat out until December (with a GBR trip in between just for good measure 🙂

Elsewhere the third Grander of the season was caught in July out of Vivau in Tonga aboard Morphius with Capt. Glenn Shaw and angler Josh McIntyre, who subdue the fish in 2 hours on #80 tackle. The 1065 pound Blue is the biggest Blue Marlin ever weighted in Tonga and measured 137” Length, 76” Girth and a 23” Tail Girth

Last month there was one in Raiatea (French Polynesia) weighing 1043 pounds and the first grander of the year was a mammoth 1290 lbs Blue on the Dreamin´On in the Cape Verde islands back in May.

Cape Verde has had a great season – it seemed to have produced less fish than normal (but that is an understatement there!) but a lot of quality fish and looked to have a steady good bite right up to July. There was at least 27 fish we heard of over 500 pounds caught in July alone!

We will be there for the peak of the season next year between May and July and had a recent cancelation so got two week available if anyone interested.

The Canary Islands has also been having a awesome Blue Marlin bite and had 26 fish over 500 pounds reported in July alone, biggest we heard a 900 aboard the Cal Rei.

After last year´s bumper season there where very high expectations on Madeira and although the numbers might not be the same has 2015 they still getting good fish of very respectable size, as is the norm on that beautiful Island. There where 14 fish over 500 in July alone and that of course including Blue Makaira´s 983 pound that won this year´s World Cup.

There where only 4 Black´s over 500 pounds reported this month from around the World but that´s all about to change as Bazaruto and the GBR come live within a few weeks.

Got to go and shine the big guns…