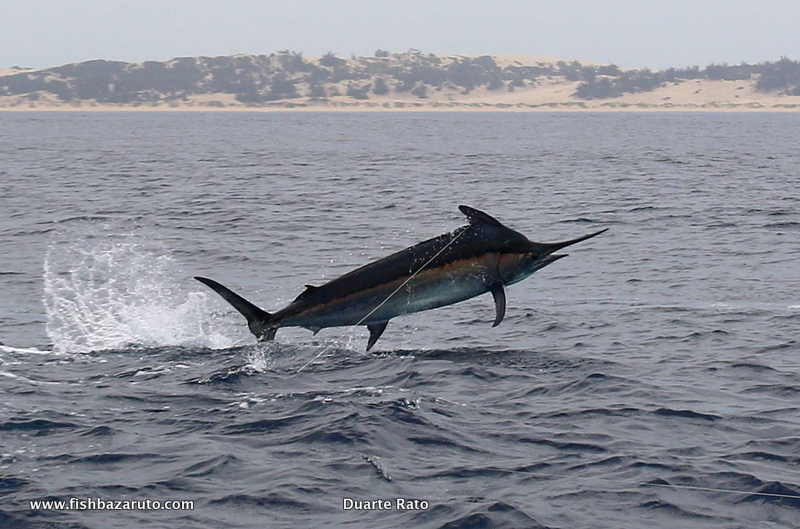 It’s been a great season so far and we have averaged a fish a day for the last month which is good anywhere, but the special thing about Bazaruto is that you get a monster climbing all over your bait often! The fishing has been great but Nick Chalk and the lads from the UK just took it to a new level this past week with 5 out of 5 (and raised another) in 4 days including a 800, a 700 and a 400…

Nick, Del, Damian, Nigel, Simon and Paul from the UK are on their third visit to Bazaruto and although they have been lucky on every trip they have made, this one was just amazing.

The boys arrived on the 17th but due to a very strong low pressure system we chilled at the lodge the first day. The second day we started down south fishing light tackle. The boys like to mix it in bit and enjoy their light tackle action in the morning, which, in my eyes, is a bit of a sacrilege this time of the year unless you catching bait! But, the most important is that guys have fun, that´s what it´s all about!

However, luckily from their side the game fishing turned off this week and they ended up concentrating on Marlin fishing instead…which worked quiet well!

Not the usual morning chaos but the first morning produced some fish on the light tackle, with 5 YFT and 5 bonnies. Later we put the lures and caught a small Black marlin for Nick.

The boys on IBO raised one but no bite, Charles on Marlin also caught a small one out of two bites and Happy Hooked released one of about 300 pounds.

The second day we decided to run up north and after 2 hours of completely unproductive light tackle fishing we set the lures out. At 9h24 I had decided to do a deeper tack of a place I have caught some nice fish of Nhangosse. I spotted a large school of skipjack in just over 200 meters of water and as we got to them a bomb exploded on the short right Riggler by Pulsator and this mad 400-pound fish starts jumping towards the boat. Totally insane and really exciting for the guys, this fish just kept coming at us, never mind I was full throttles ahead this thing was just warping straight at us. We managed to stay attached as it then starting to greyhound away on our port side. Pretty wild stuff as this thing took us into the backing before we turned & chased. Simon was in the chair and brought the fish for a release in about twenty minutes! Hi-fives all round and of we go again. It was pretty quiet for us and all the other boats for the next two hours but finally at noon we managed to get two Yellowfin, first live bait out in 2 days and all it took was 20 minutes for the 8 kilo YFT to be gulped down by a 700-pound fish. Luckily, just after we caught the bait and seeing Simon did not look to comfortable in the chair, I did an all chair demonstration for the guys once again. Got stuff as now Nick climbed on it with a 700-pound fish at the other end. Truth be told he had to do more winding than pumping as this thing stayed on the top and we could actually get on top of it pretty quickly and at the 14-minute mark took hold of the leader for a release – unfortunately we no pics.

In the afternoon, we found a massive Yellowfin school and had some fun on the light tackle although the sharks were also making a meal of it.

The boys with Alex on IBO actually caught a big shark on the 30-pound gear…after a 45-minute tussle & struggle! Christian on Sailfish got a 500 pounder on a live bait down south.

Whilst chasing Black Marlin, all sorts of other species are encountered, in the waters off Baz

Another Bazaruto Black Marlin by FishBazaruto.com

I believe in the don´t leave fish to find fish theory, it makes sense and I think it’s the first time I caught two nice fish and did not fish the area the next day. But, I also don´t like to fish in the crowd and unusually for Bazaruto there where about 12 boats fishing up north which to me is a lot. I had a good feeling to go south and also wanted to find an area with more game fish for the guys. Early morning, I had a chat with them, explained it was a gamble but that I had a good feeling.

We made the hour long run down to the north of the canyon and set the lines.

I set myself in the best possible tack with the easterly swell straight to Best reef as my plan was to try and catch some game fish for the guys and a bait early morning. However, the plan was aborted when we were on the southern edge of the canyon and Alberto shouted MARLIN, left long!

A small fish was following the lure and then it charged and we hooked up. Simon, now looking much better in the chair brought in the feisty 100 pounder for a few pics before the release.

I continue to Best and the pinnacle just south of it and tried for bait for about half an hour to no avail. The tide was still good for the Canyon so I aborted that and turned to get back to the area we caught the first fish. Not 500 meters from the first bite that morning and another bomb exploded on the short bait Wrigler and we were on.

Now let me tell you about the first three minutes or so with this fish;

Only once before had I seen a big Black hookup and run at lighting speed straight down. That was a 1098 lbs we caught a few years ago. Well this fish did exactly the same, line straight down peeling at a serious pace and nowhere to turn! All of a sudden I see the line take an angle to the right so I start turning. Just then this bloody thing changes direction on the dime and starts coming up on the starboard side, I tell Nick to back it off all the way to 18 pounds when this very fat fish starts jumping insanely on the exact opposite side. Just chaos and three minutes to tame this thing and get everything under control. By then we were well into the backing and it was a long hard work for Nick to get it back. This thing did a few more jumps but still pretty far but I knew she was well over 800 for sure, maybe more! She then went down and just did not give us an inch. What a strong fish. Nick was looking really good in the chair and 15 minutes into it I told him to go to 60 pounds. Three times around the half an hour mark we had the double a couple meters from the rod tip but she would just not come up or jump. I knew this was a fighter and although it’s always good to take a few good pictures for the guys, the heath of the fish is more important if you gonna let it go. So, I had a quiet word with the boys and told them to hold for everything they had when we got the leader. 45 minutes into it she comes up and we turn and chase her really good. She then dug down a bit and started swimming. We reversed into her with the line on our port side and inch but inch she slowly come up. Nick was really looking like a pro now and withstanding the immense pressure. The double come up and eventually, Alberto got hold of the leader, we had a few good couple insane minutes of a genuine tug of war.

She just dogged down, I just wanted for her massive to come out to get the guys a good picture. She was a nice one, at least 800 and Alberto that saw her much better agreed that maybe more. Eventually, as I had expected and hoped for, something gave in (and it was not Alberto), and the X-Strong 40mm Pakula Dojo hook opened up.

We raised another one that day on the long right pulsator Marlin magnet and 2 hours to go got a couple YFT which we baited. One was chopped by a wahoo and the other eaten by a huge hammerhead. The boys on IBO got a real nice bull dorado…

After catching 5 in the last three days the boys decided to have a break and go and spend the day at Santa Carolina, light tackle spinning, plugging and having a nice barbecue and some cold one´s. I was not happy to break our good mojo but there was oil change to be made and sort some other chores so all good and they had a great day with Alex and Lourenco at Paradise Island. They had a great time and caught over 20 queenies.

Our last day yesterday, the 23th October was the first day in over a month that we did not see one. We did have a great day however and caught a real nice dorado, 2 big wahoo and a bunch of big Yellowfin tuna and skipjack. ´

We started with Carl Jankowitz today and released a fish over a 1000 pounds, but will report on that later…

Now time for some cold one´s…