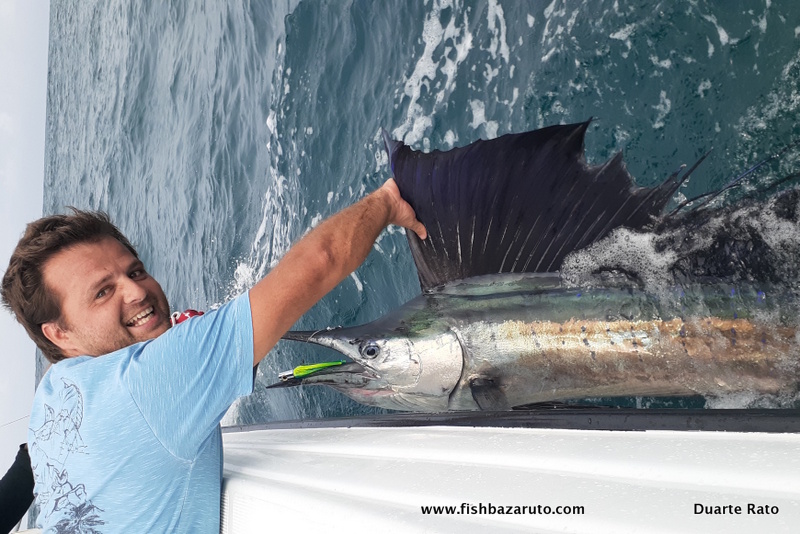 I was stoked when Duarte said I could write the intro to this story. You see. Diogo aka Diablo! Well. This guy has become the fishing Devil! I mean this dude never even fished before he moved to Vilankulos and started hanging out on the islands. Now look at him!

Great light tackle day on the water last Wednesday, out to get some fish for the table, but besides some great eating fish we also put Diogo (AKA Diablo) onto his first Mozambique Sailfish which, he promptly released.

The heavy gear should have come out of its long hibernation a couple of weeks ago.

At this stage, we would normally be plying these Bazaruto Waters day after day with the #130´s and, anything else, but those big Black broomsticks, are bait.

Clients can get here, so, it’s a very sad state of affairs and when we do get out there its mostly to go and get some fish for us and friends and splash some salt water in our faces.

But, anyway, we had a really nice day with many species in the early morning including YFT, cuda, wahoo, bonnies, skipjack and rainbow runners. We were just using some Halcos and feather´s but after seeing 3 free Mozambique Sailfish jumpers I decided to run a small Iland lure / ballyhoo combination…just in case.

Not long after we had one come on one of the daisy chains but got no bite out of it.

Then we had another come on the rappie´s and then switch to the bait we hooked up but the hooks come undone after a couple jumps.

As we got to Best we saw another Mozambique Sailfish tailing down swell. Turn the boat and managed to put that bait just to its side. As I saw the fish turn I jumped up from the wheel, picked up the bait rod, short dropback after the bite and this time we were properly stuck.

Diogo did a great job bringing the fish close within a few minutes and we had an amazing jumping show by the boat. Leader, couple photographs and send it on its way.

The day ended in chaos as we spotted zillions of feeding terns at the top end of the Canyon.

There were some massive schools of YFT, Skipjack and bonnies all mixed up and eating their hearts out on oceanic anchovy. Proper mayhem…

The next hour was pandemonium as double, triple and quadruple strikes, mostly Yellowfin kept on coming.

Cruising back and as we approached the south point of Magaruque Island Diogo, excitingly looks at me;

“Look at those sand banks. The sand almost looks pink with the setting sun!

Well, it was not the setting sun but the biggest flock of flamingos that I have ever seen at Bazaruto.

Or anywhere else for that matter.

The pictures really do not do it justice, but there must have been at least 3 to 400 birds in there…

And, talking about special sightings. As usual this time of year the humpback whales are thick out there and we saw loads for the day.

Most of them with calfs and all heading south towards Antartica….

Last weekend we had a nice three days of chilling and shore fishing at BD point.

Wasn’t a great tide for the place but we caught some guitar fish, rockcods, barracudas, loads of pescadinhas and some other odds and ends.

For now, we just hoping that this circus comes to and end soon and that our guys can get here and we can save, if only a little bit of our Marlin Season.

Hopefully the next post will be about some proper fish.