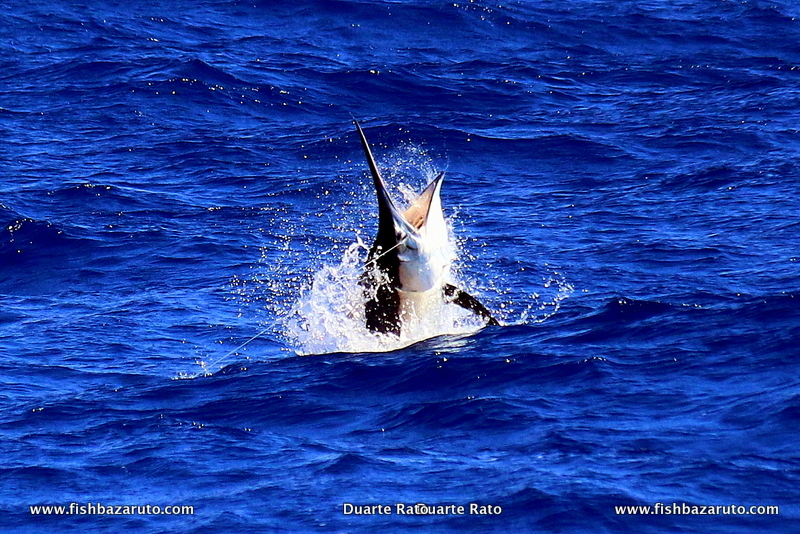 We just had our good friend and regular Ian du Plessis here for his yearly Marlin trip to Bazaruto. Along with him was Gideon, who also come last year to catch his first ever Black and Jaco who had never fished for Blacks before.

Unfortunately, due to some pretty heavy weather they had to cut their trip short and only fished for 3 ½ days but we did made the most of it and saw / raised 9, had five bites, four hookup´s and released 3. Along with it where plenty of Yellowfin Tuna, skipjack, bonnies and some sharks.

After having such a great day two days before our first day was very disappointing. Beautiful sunny calm conditons with a light breeze from the NE but the fish had switched off and despite there being at least 5 boats out there, it was slow for everyone, even the boats targeting light tackle game fish. We saw two Marlin, one `sunbathing`and a free jumper. We caught a bunch of tunas and had a few baits sharked and the highlight of the day was Jaco getting for the first ever time in the chair to release his a 250 pound bronzie.

On a marlin trip to Bazaruto, you will encounter all sorts of denizens from the deep!

Staring out we had to deal with a bunch of sharks. The Taxman!

Beautiful and powerful, and always up for an argument – the sharks can be quite adamant around Baz sometimes.

The next day greeted us with a big southerly wind. I told the guys it was fishable and we made the trek north. But, as we rounded the corner it certainly looked hairy out there. The 25-knot wind was pushing hard but it was the messy low period waves that make it really difficult. There was jokes all round at my expense. Gideon said he was going to print a shirt saying; Capt. Duarte as three kinds of weather; Good, OK and fishable.

Ian said he was going to print one saying; I Survived a fishable day with Capt. Duarte Rato!

Well, we made it all the way out so we put the bait rods out and caught two bonnies straight away and baited them. The first one got sharked within the minutes. Ten minutes later we had another bite and this time a 250-pound Black started to jump. Gideon got in the chair and I followed the fish up sea which was no easy feat. But after some dancing around and some great jumps we got the fish by the boat, tagged it and let it go.

About to let a 250lb black go back swimming free

Another fab marlin trip to Bazaruto by FishBazaruto.com

Cheers all around and all of a sudden everyone was suddenly keen to carry on fishing!

We went back in got another bonnie but it got sharked. Back shallow and there was some good action there and we got 3 YFT. Then we got a skipjack and put it out but this one was chopped by a wahoo. The wind was now pumping even harder and it was getting real big so we decided to put the lures for half hour to make our way back. Fifteen minutes later we had a good fish come aggressively on the long left but miss it altogether and not come back for seconds. A tad later we saw a small fish tailing down sea put the lures right pass him but no interest. It looked good and there was action, but it was just too much and with one fish in 3 hours of fishing in those conditions was good enough and we got back to Clube Naval for a nice lunch and a few cold one´s.

Despite having eased down it was still blowing a good 15 plus knots the next day but at least the waves where wider apart. We went north and again caught a bonnie and a skipjack straight away. We put the live bonnie out and the skipjack skipping right by the boat as a shark decoy. Within 10 minutes we had a hammerhead come on the skip bait which gave us enough time to take the live bait out put it in the tube and move away. Ten minutes later we slowly tacking out when a 300-pound fish shows up on the starboard of the boat, not 10 meters away. The fish then turns and comes behind out skip bait. Then it fades and comes hot on the live bonnie and as it furiously takes it the bridle breaks….something which I can´t remember having happen before. Really unlucky and everyone feeling a bit dejected as we went in to get another bait. We quickly got another 2 bonnies, put them out and within 15 minutes have a bite and hookup, this time to a 300-pound Black. The fish puts on a great series of jumps and then goes down and we see its tail wrapped. Sunset it and Ian quickly brings it in for the release. We then spent an hour looking for bait to no avail. That is, until we find a big school of YFT inside Nhangoose. We get a 8 kilo YFT, put it in the tube and head deeper. The bait was not in the water when we get a deep bite. No one see´s the fish and it never jumps, but despite being a slow tugger I am confident it´s a Marlin. Jaco gets in the chair, we put on the heat and when we get the fish very close to the boat she finally comes out the water, all 600 pounds of it and spits the bait back at us! We did not see another one but had amazing action for the rest of the day with YFT and skipjack, baited another 3 baits that got sharked and Jaco released a 400 pound Zambezi.

The next day it switched to the NE and again it went real slow. We could not get bait for almost an hour and all the light tackle game fish boats where complaining about the lack of activity. We put the lures and went deep and then saw a big school of skipjack. Got one, baited but got sharked within 15 minutes. Back to the huge skipjack school that was moving south and got another bait. Put it out and then we worked around the skipjack school but nada. We did get another skipjack on the spinning rod and then worked tacking south as the NE was now picking up.

Two hours passed and nothing, we so little surface activity and no sharks pestering us I decided to put one of the baits on the downrigger. Well, twenty minutes later she get´s taken and we hook up to a feisty 250 pounder for Jaco´s first ever Marlin released. We worked south with the lures but had no more activity for the day.

Another fab marlin trip to Bazaruto by FishBazaruto.com

Back at it tomorrow (the 19th October) with the guys from the UK on their third consecutive trip to Bazaruto.