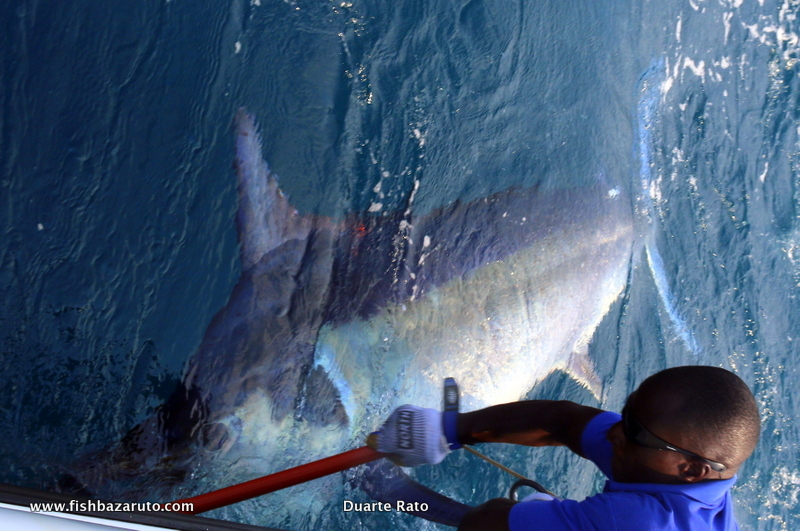 Bazaruto early-mid November ´17 – Green water but big fish…: As it happened during the last three weeks of October, as previously reported, a good wave of big fish continued into early November with the few boats fishing getting a good number of big fish of 500 plus pounds. Then, on the second week of November conditions changed and green water moved into the ground. However despite that and although the numbers did drop, the quality of fish did not and another bunch of big fish up to 945 pounds where caught, making a total of 9 fish over 500 pounds caught within the first 10 days of the month by the small fleet.

That is a total of 18 fish over #500 and up to #1100 in the last 30 days alone. When one understands that there are only three charter boats (and some not fishing every day) and some visiting private boats for a few days here and there, these numbers really taking on an all different meaning.

So yeah it´s been outstanding but, this last week has been a real challenge and conditions could hardly have been more difficult. The weather has been pretty sporty and seeing all boats but one are small outboard powered vessels, it really becomes a challenge. Furthermore, we have had a lot of easterly wind which, as everyone knows, is pretty bad for a good bite. Bait has been very scarce which is unusual on the archipelago but the worst of it all is that the water as gone from bad to worst and yesterday was a horrible green stretching from north to south.

However, despite the hard conditions good fish where caught!

My last report was to the 5th and the next day we started with Ian and Brian, all the way from New Zealand, on their second visit to Bazaruto to fish with us. Our first day was quiet although we did have a bite from a fish looking to be in the #300 region that run for about 100 meters and never hooked up. It was slow all round with only Sailfish, releasing a 450 on a live YFT right next to where we had the bite.

The next day we caught a bonnie and a 14 kg YFT, put them in the tubes and live baited but both were sharked within an hour and a half. Then just before 9am we hooked up on another #300-pound fish on a lure but it pulled the hooks right next to the boat. We got some YFT, a dorado and a nice prodigal son. Sailfish was on a roll and found some a good stretch of water way south at Linene and went 2 for 2 with a 250 on a lure and a 350 on a live YFT. Both, Scumfemfe and Copper Bullet also caught a small fish each.

Finally, the next day, the 8th of November, there was a good bite going on. We started shallow of V mile and there was bait everywhere. King mackerel (cuta) sky rocketing in the shallows, a tad deeper and between the dolphins there were bonnies and yellowfin. It was a light tackle festival if you wanted to have one. We caught a few bonnies and skippies and as soon as we got a nice small 6 kilo YFT we went deeper and put it out. The water looked horrible, much worst that the previous days so we put the lures and worked north to sailfish Bay. No change and with a big blow forecasted to arrive after noon I decided to do a very long run down south all the way to the canyon. As soon as I got within radio contact I spoke to Kevin from Big Bob who told me they just released a 300 down there. Within 45 minutes we got to the area and immediately hooked up to a little guy on the short corner Riggler from Pulsator lures for Brian. We worked the area for a while but with the big blow expected I started doing very tight tacks north where I had seen better looking water on the way down. All of a sudden, the wind started to howl, Morgan on Sailfish called me and said he was heading in. I changed the tack on a more northerly direction to get going when a nice fish come on the long right St. Thomas Prowler. It knocked out the rigger and as the boys were putting it up with the peg on the hand she jumped on it and hooked up.

It was a nice fish and with the wind coming up I just wanted us to do the job really quick. Luckily, she was a jumper and gave us some really good fun and short range jumps, which we could not make the most of seeing it was just too messy and wet to bring the cameras out. Within 20 minutes or so we had the 550 fish alongside for a release and made our way home straight after.

Round about the same time, but way up north at 25mile, Roger and Nick MacDonald where live baiting a skipjack for an hour aboard Alladin´s. At around noon they decided to put it on the downrigger and just a few minutes later they hooked up to a real nice one. They fought it for over two hours in the howling wind. The fish surfaced with very little life in it and they decided to boat it and run for shelter.

The next day was unpleasant to say the least and we went out late and only did a few hours but those that persisted where rewarded with Big Bob releasing a 700 on a swim bait, Scumfemfe a 600 and Copper Bullet a smaller model.

Yesterday was slow all round, water got a notch worst and very picky fish. We raised two fish on the lures that did not commit up to 400 pounds, Sailfish missed two small fish on baits and Marlin lost a 500 on live bait and there where a couple other fish raised.

Back at it tomorrow…

After consistent fishing on both quantity and certainly quality of fish for a whole month one would expect a lull on the bite. Conditions are not the optimum and it´s difficult to motivate oneself when the water looks like you fishing for barbel instead. But amazingly there´s still been a few fish around and hopefully it carries on a as such until it all comes right again and the next wave if big fish come on the bite.

Until then tight lines,

Ian & Brian – On their second trip to Bazaruto looking for Big fish, Brian & Ian from New Zealand showing the jewels that got them the 2 fish up to 550 pounds a few days ago aboard VAMIZI.