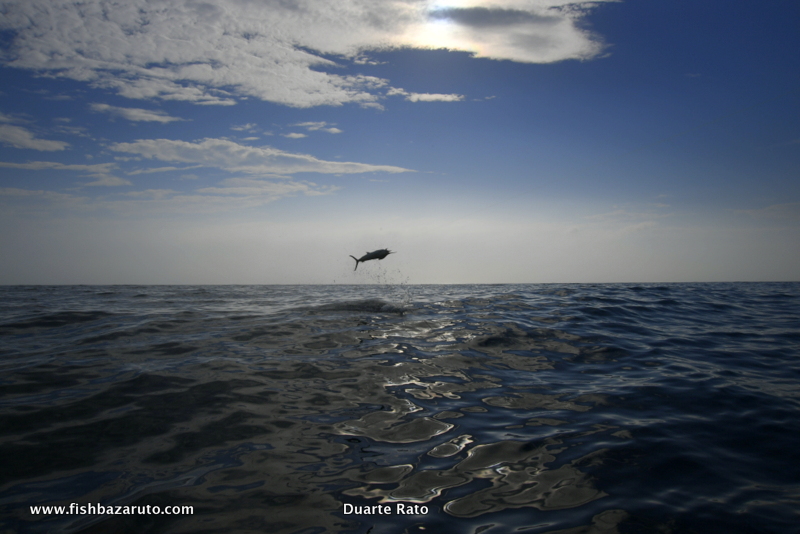 We ended the last report midway through Ian & Brian´s trip, who added another 4 Marlin Release for their trip to Bazaruto. All in all, they released 6 Marlin (5 Black´s and 1 Blue) up to 550 pounds in their 8 fishing days. By far the worst average and size of fish we have had this season – but still World Class fishing. To top it off, and as it happens here they also released a few gamefish including Yellowfin Tuna, Prodigal son, Great Barracuda, wahoo, Kind mackerel, dorado, skipjack and bonitos.

This 550-pound Black was the biggest Marlin release from the 6 Marlin, Ian and Brian from New Zealand, got on their second trip to Bazaruto aboard VAMIZI.

Our last report ended on the 11 of November and the next day we were out there with a fresh, 15 knot South easterly wind. As reported the water had gone green and it just kept getting worst by the day with loads of jellyfish and dead plankton on top. Along with some pretty harsh weather, hardly good conditions for Marlin fishing, but amazingly we kept getting them…

We started the day looking for bait around sharkville and although there were a lot of skipjack school´s around they were picky as only they can be and did not seem to want to eat anything we put out there. An hour into it we put the lures out and worked south. Our plan was to work the northern edge of the canyon but it looked lifeless so we pressed further south and went all the way into Best reef looking for bait. Just before 9am we finally saw some birds hovering above a skipjack school SE of Best in 70 odd meters of water. As we approached the Short corner lure, the Rigler from Pulsator, was taken and Brian did the honors of bringing the 150-pound fish for Marlin release.

We then worked back to the northern side of the canyon and along with Big Bob worked the area hard for a couple hours. The only place that had looked really good to me the all day was out of sharkville in the morning with all that bait around and so about noon I decided to move up there and work the area. Probably not the best option as about half an hour later Big Bob called on the radio that they had just hooked up to a real nice one.

Anyway, as we got to the marks outside sharkville we caught 2 skipjack and put them out. All it took was 10 minutes for one of the baits to be taken and a small Black started jumping on our stern. Unfortunately, the circle never found the spot and the other bait was sharked about 45 minutes later. Meanwhile, Big Bob had not come back to us in all that time so obviously a real one which Kevin later reported at 900 plus pounds for Schalk Theron. That´s the third fish over 900 caught in the last three weeks for the small fleet…

Congrats on the nice Marlin release…

Along with Big Bob, the next day saw us head down to the northern edge of the canyon in the morning. However, it was disappointing to see the water had even got worst, with zillions of jellyfish and a thick, horrible yellowish layer of dead plankton on top. The water the steady 24.9c that´s been persisting for the last 8 days or so. It turned out to be a real slow day and none of us saw one on the day.

We did have some action and great fun with game fish and sharks on the southern edge of the canyon when we found a skipjack school mixed in with some small and real nice big YFT.

We had one YFT that was a brute and which we fought for 45 minutes before breaking the line. We then had another one that almost spooled us (again on the light sticks) and finally landed a couple smaller specimens. When we at last got a small one of about 8 kilos we baited it. But, it got taxed and unfortunately the circle found the spot. Ian got on the chair and put on the heat, sun setting it and bringing in a real big bronzie of about 600 for the release.

Small Yellowfin tuna, skipjacks and bonitos are the most used live baits on Bazaruto.

We went to have a look between V mile and Sailfish Bay the next morning, the 14th of November. Again, it looked horrible with the ghastly green water. Morgan on Sailfish and Christian onGame Changer where also both out there with some Russian clients of mine and after speaking on the radio we decided to go out wide to the 500 meter mark out of Sailfish Bay. It was interesting to see the water change to a nice blue and come up to 25.6c when we got to the 240-meter mark. We pressed on against the easterly swell and finally got to the area. But, despite the nice-looking water, it looked pretty dead there as well. No current lines, frigate´s or bait. The only positive things where a few flying fish and a hard pushing current from the north, hardly anything to get excited about. We all worked the area for about 2 hours and besides a dorado for us and Christian nothing was going on. I decided that I would rather work the edge of the green / blue water current in the 240-meter mark so put a heading towards the area of Nhangosse that´s on that line and has been so good to us in the past.

Out of the nowhere and when we got to 380 meters the long right green little monster (Pulsator Magnet) gets taken, followed by a screaming crazy run as only blues can do. Ian jumped in the chair to bring and release the small Blue. That was pretty much it as we made our back to get away from the rain and heard of no other fish on the day.

The morning of the 15th was like clockwork! Bazaruto is known for its Giant Black Marlin but Blues are regularly caught when boats venture out wide

Ideally, I had wanted to go out wide again but with a much breezier Northeasterly and a very uncomfortable chop had decided to stay in. But, if we were going to fish in the green water then a live bait was the way to go and that was the plan for the morning. It could have hardly gone better…

We put the bait sticks just after 6am at V mile and worked north. 10 minutes later at VI mile there where bonies and cuda jumping everywhere. We picked up a bonnie put it in the tube and run out. Once we got to 50 meters we put it out and started heading deeper, with the current on a SE tack. As we got to 62 meters, hardly 10 minutes later we get a bite and hook up to a 400-pound fish for Brian.

The fish never went down and come in really easy and we had the leader after 6 minutes, however we had to dump it and from then on it was pure madness as we raced around after this thing in a very choppy sea. Eventually after a real work out on the chair for Brian and even worst for Alex on the leader we let her go.

High fives and this was not even 7am and a Marlin release!

Looking incredulous at the atrocious green water we had caught the fish, I could just not believe it and “half joking“ asked if we should go back to the lodge for breakfast. We stayed on, looked for bait for an hour and then put the lures but by 9am had to pick up and run back to the lodge soaking wet as we ducked very fast from an approaching rain storm. The good news was that on a deeper tack we could see the blue water had moved much further in all the way to about the 130-meter line.

The weather forecast for the 16th, the guys last day was strong NE, then a lull as it switched and a big SE front expected at around 2pm. They could have not been more wrong and we had, what was probably, the flattest day of the month.

Once again, we had a brilliant start and again a Marlin Release before 7am. Ok, a tiny little cute 35-pound fish that took one of the Halco´s laser pro in 22 meters of water of VI mile as we tried to make bait in the morning. But they really are awesome to see, the jumps and colors are unbelievable.

The rest of the day was very slow with just a great barracuda and skipjack. Amazingly overnight the Blue water had pushed all the way into 45 meters and that new body of water brought the temperature from a steady 24.9c for the past two weeks to an amazing 26.8c. That´s two degree´s overnight, the ocean just looked absolutely dead. No bait, turtles, dolphins, whales, hammerheads, nothing. Besides our little fellow, the only other fish we heard of was a striped Marlin out wide for my good mates from Maputo ´Tamos Juntos.

Check the awesome pics we got from the little fish…

So, altogether this week was by far the hardest, most difficult conditions we have had all season. On had to see the water color to believe it and it was just preposterous that we were still catching fish on it…and up to 900 pounds as well! It´s just been an incredible season and even at its worst still producing fish on an almost daily basis.

The big SE finally got here last night and we are having a rest day today and oil change tomorrow. Back at it on Sunday the 19th of November, starting with William Hansen from the UK for the next 4 days. It will be interesting to see what this new body of water brings. Nice to have blue water in again just hope the temperature does not keep on going up to soon as we all know what happens when it starts getting near that 28c….