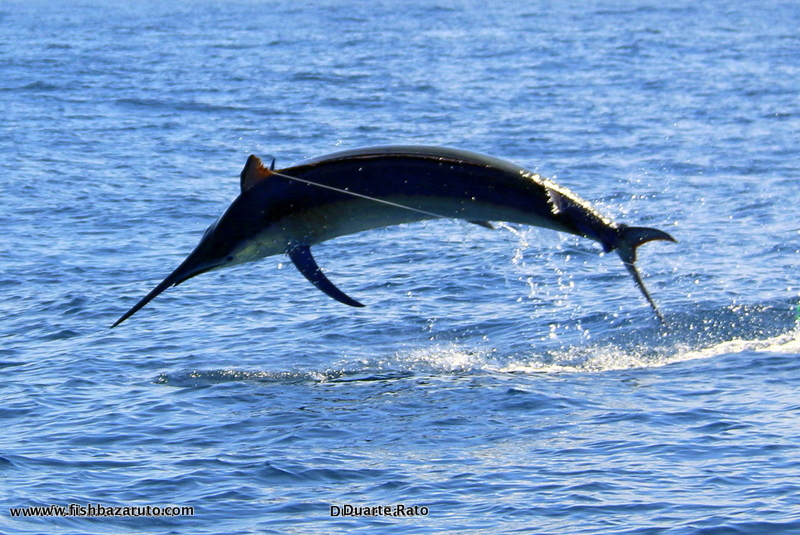 It´s been a great season with many big fish and although the bite has been nowhere as prolific as it was for the last six weeks stretching from early October to mid-November big fish have being seen and caught on a regular basis into early December.

It seems we have used all our luck and we did not hookup to any real big one during this last stretch, but can´t really complain after what we had all season and we still had some great fun and good days with excellent people. However, even though it´s been thinning out and there´s only been two or three boats at maximum everyday out there late November and early December still produced a few some nice big fish, including a couple over 900 and one in the goose bump category lost…

As anyone in the game knows the last couple weeks are hard, one´s a tad shuttered not to say burned out and not much time and just looking forward to some downtime with the family and lots of sleep and rest….

So, will just leave you with a small report from this last couple weeks along with some photographs and will soon write a season report with a wrap up on what has been a brilliant Bazaruto Big Fish season!

I finished the last report with Ian and Brian´s trip to Baz all the way from New Zealand. The next day we had oil change but heard that Beluga released a #300 and Quatro had an epic story! It goes that they hooked up to a beast of a fish on a lure out of Sailfish Bay early morning and they fought it on #130 tackle for 9 hours before the line was cut on the propeller. They estimated the fish to be over #1400 pounds!

The next day we started a 3-day charter with William Hansen from the UK and had some good fishing and almost had a day with a Grandslam, amazingly the only fish we missed for it was a Black Marlin…ironic to say the least!

All in all, we went;

0 for 2 on Black Marlin, missing one and pulling the hooks on a 400-pound fish.

3 for 3 on sailfish, and raised another 2, the biggest we caught a 45 kilo plus fish.

We also caught a bunch of game fish as well including some good wahoo and YFT, bonnies and a 600 pound plus Zambeze (Bull) shark.

Over this time there where a number of fish caught by the other boats all in the 3-400 range as well as a couple of small Blues out wide.

Although Sailfish peak in the winter months between May and September on the Archipelago, they can be caught year round and where a nice and common by catch in late November and early December, including some Big Fish exceeding 45 kilos.

We started with Emmet & Liam right after but it was pretty dead out there and despite incredible conditions with purple 26c blue water, the fish where just not on the bite although some boats did find some good ones.

Despite that we got Liam´s first ever Marlin and on the last day had an EPIC battle in some pretty hairy weather.

Bait was plentiful as we got to lighthouse early morning. We knew we might have to cut the day shirt as there was a big SE blow expected so we got right down to business. All it took was 5 minutes to get a cuda and a couple bonnies which where unfortunately sharked after 45 minutes. Come back in get a 7 kilo YFT and go out, but again it was sharked after 45 minutes. Back in, got a nice size cuda which we baited and this one lasted about an hour before being chopped by a wahoo. We put the lures and worked amberjack for a while but as the SE started to come up decided to move further south so as to tack with it when it come real strong. Just after noon we lose and YFT and right after have a Marlin knock the long left down. We work the area just outside Alladin´s with the lures still have two baits rods out and all of a sudden one gets taken but before we bring it to the boat something much bigger (which clearly was no shark) takes that. The 250-300-pound fish only jumped after 20 minutes and Emmet had an Epic fight with this fish on the bait rod /TLD 25 combination.

For the next for 2 hours the fish took us 4.5 miles out in a raging sea with the SE clocking at over 25 knots. Eventually we got her on top and for 20 minutes had her right there but just out of the small leader reach and just after the 2-hour mark close to the boat the double broke, probably chafed by the tail.

We also got a some nice wahoo, YFT, queen mackerel, king mackerel, bonnies, skipjack and released couple big hammerhead sharks on the baits.

It was not a Big Fish but it certainly felt like it on the gear we hooked it and in 25 knots plus. Awesome adventure for over 2 hours with Emmet doing the honours on the rod and a brilliant job as usual!

We have had some amazing wahoo fishing the last three years and August to September was incredible. We then caught them here and there throughout the Season but in late November they once again appeared in good numbers and size for a few days!

Over the last few weeks there as also been a good number of very small Blacks right by the reef and at one time or another most boats have been hooking and releasing them when bait fishing in shallow by the reef´s. Pretty much as it was in August but even smaller fish in the 10 to 30 kilo range.

But there were also some very big fish reported up to 500 and a real nice one that went 912 on the formula late afternoon of the 26th November by Bazaruto Explorer.

We then started with Dave and Michael from the USA for 3 ½ days and had a great time although we suffered from a real acute rubber hook syndrome going 2 for 5 on Black Marlin including missing a real beast. We also caught a Sailfish.

Amazingly on the first half day and after popping for GT´s the guys hooked one within literally a minute of setting the spread out which David released at 200 pounds. The next day, the 29th of November they missed one and Mike released a sailfish right at the end coming into II mile.

On the 30th we caught some kingfish and cuda off the lighthouse and then set the lures. We had a non-ID knockdown on the long right early morning and then got a real nice bull dorado. Just before noon finally a proper one showed up and gave us the most amazing bite, miraculously not hooking up. This thing literally pounded on the long corner Ruckus from the inside out missing the lure altogether. It turned and charged this time inhaling the lure and taking off at warp speed, coming undone after peeling over 100 yards! A couple hours later we had one looking about 400 come on the short corner Rigler also peel off some line but never finding steel.

We went down to the canyon along with Big Bob (who released a 500 on the previous day) on David and Mike´s last day. It looked great but no bait and pretty slow the all morning for both of us. At noon, we finally spotted some birds out wide in over 200 meters of water and managed to catch a coupe skipjack and a small YFT which we baited. It had certainly been a late bite and sure enough we got the bite on the skipjack at 14h40 and released a small Black for David. Small or not it was cool and we worked real hard for that fish. We left at 15h30 but Big Bob stayed on and also released a small fish later in the afternoon and then a 550, late again the next day.

Here´s to some awesome Bazaruto times and some big fish…

Rates and Contacts for FishBazaruto 2018