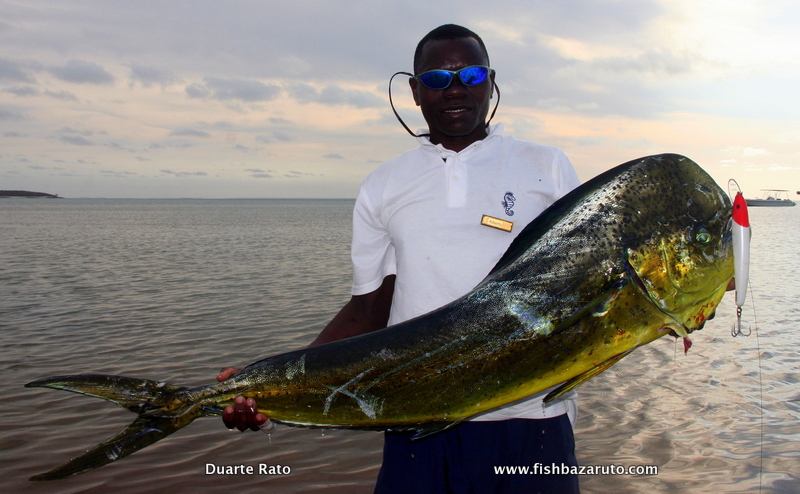 Another super HOT February in Bazaruto

So, it’s February! Bloody hot and rainy, cyclone season, unreliable weather and fishing, normally due to extreme water temperatures. But, not this year it seems, despite the rain and unpredictable weather, the water temperature as remained at about 28c as opposed to the 31c plus from the last two years and there´s just stupid amount of bait out there, mostly small YFT and skipjack which are gorging themselves on tiny sardine all over the place.

The water has been greenish due to some heavy rains and this is by norm the quietest time of the year, on both tourists and fishing. Few boats have been out there and mostly doing light tackle game fishing and some jigging and popping, which as usual this time of year, as been brilliant. Especially the jigging with some good numbers of GT´s, yellowspotted and bludger trevally´s, green jobfish and some other species. Spinning for small yellowfin, bonito and skipjack as also been pretty good.

What is surprising is the amount of Marlin. Most juvenile fish but also some nice fish being seen by the very few boats out there, none of which are actually targeting them. A couple weeks ago the boys went out on IBO for a half day of light tackle game fishing. They put one #80 out with a Pulsator Marlin Magnet on the short rigger and at around 9am had a fish every bit of 800 pounds inhale it & hook up. A few days later they lost another again of the same calibre, again on the same lure on the single big rod in the spread…

Apparently this black just started jumping insanely as it bolted off and the Swiss guest refused to take the rod. The boys say he was petrified and in absolute shock. The fish then started screaming towards the boat, no one attending to it, the boys put full throttles ahead but did not come tight in time and she come undone. Apparently, the guest was happy with the outcome and quite relieved this monster had disappeared for good. Go figure….

Excited by the turn of events another guest staying at the resort decide to go Marlin fishing the next day, but first wanting to catch some game fish, all on a 6-hour charter. Well they did not only catch a bunch of Yellowfin, skipjack and two dorado (one a real nice bull), but also pulled hooks on a 600-pound Black and released a small one about 200.

It´s nice to see this at this stage and hopefully, after the brilliant Giant Black Marlin Season we had from September to December, as it normally happens, we will get a second good run of fish from March to May.

But, if the fish seem to be around the Bazaruto Archipelago, down south at Inhaca, as is usual this time of year and until April, it is really firing up on some extraordinary numbers of Blue Marlin, along with a few Blacks, stripes and Sailfish.

We only get the odd report from the weekend warriors and the SA visiting anglers fishing down there and it´s a pity no one is putting the numbers down of this World class fisheries. Well, and a sin that no one is there day after day with a good boat and crew to experience Blue Marlin numbers that seem to be as good, if not better, than the best out there! And, no one is even pitching for them!

Pulling lures and raising way more than double of what they released Offshore got 7 Blues ranging from 200 to 400 pounds in three fishing days. This included a triple Blue Marlin strike. Fishing over the same weekend, Kambaku released 2 Blues, a Black and a sailfish over two days. Both boats had 21 ID Marlin strikes for the 5 days…..imagine the numbers on the pitch!

Now, this last weekend and despite some really windy conditions on Sunday, the 18th February, four boats released a blue each.

Back at Bazaruto and over the same weekend, VAMIZI went 2 for 2 on Black Marlin in two half days. Making it 4 for 5 on their last four fishing days, all of which were half days. There seems to be a lot of this juvenile Blacks around as other boats also reporting seeing them regularly. Great fun on light tackle…

Not on fire but pretty good by-catch on them for February and giving the (mostly tourist) guests a real add on to the light tackle game fishing which keeps improving daily, mainly with YFT, dorado, skipjack, bludger kingfish, bonnies and the odd wahoo. The men in the grey suits have, as usual been out there in abundance and for those who like that kind of stuff the action is nonstop.

That´s pretty much what´s been happening the last two weeks.

We off to fish Inhaca starting early March and for the next three weeks. Then it´s back to Bazaruto where we pretty booked up all the way from early April to early June, with only 5 days still open at the end of April.

We then have two weeks open in mid-June and in July we off for some wild fishing in Madagascar.

We also have a two-week opening in late July to mid-August. This is an amazing time to fish light tackle for juvenile Blacks, Sailfish, yellowfin and our great big wahoo winter run.

Then it´s getting ready for our Giant Black Marlin Season starting early September all the way to December. We still have one slot open on VAMIZI in mid-September and another in late November.

Christian Kruger will be running our second boat IBO and we still have three slots open on that boat so contact us at dudas7mares@gmail.com for bookings or more information.

Tight lines & all the best