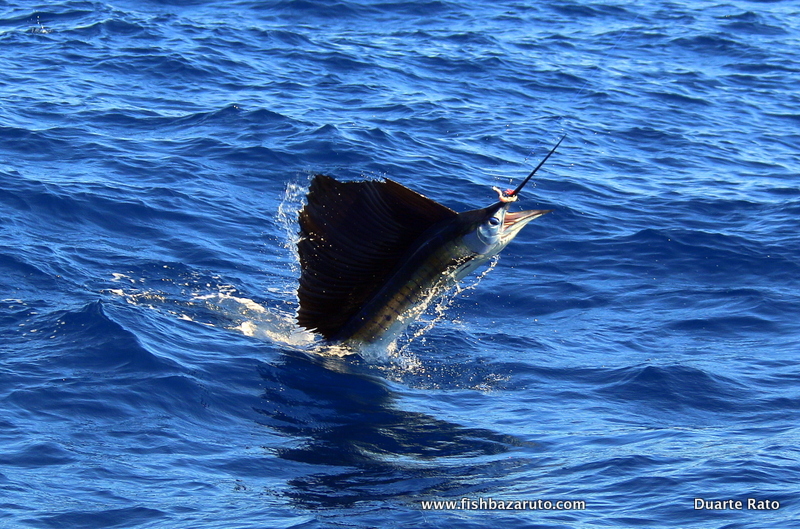 Between the 11th to the 22nd of July myself, Ian Du Plessis, Neil Bartie, Gideon and Jacques did a trip to Madagascar with Bossi Adventures in what turned out to be an exceptional trip to the Costa Banks where we had some epic action on Sailfish.

On the first part of the story we covered the first four days of fishing where besides a great amount of game fish we released 46 Sailfish. Our last day had been the best so far with 22 releases out of 35 bites, in a day that we raised over 40 fish.

We had planned to go out at first light the next day but….

Well, the idea was to go out at first light, however Neptune had other plans for us, and we woke up to a stiff 16 knot plus wind and some heavy swell from the night’s blow. We had a leisured breakfast and only started fishing much later than the previous days. With the wind blowing it was hard going to do our program and it turned to be slower, probably because of the beast from the east, seeing most sailfish that come up where lazy and shy!

On the other hand, the game fish where wild and really messed it up seeing between wahoo, four doggies up to about 16 kg, rainbow runners, loads of bonnies and the usual great barracudas, we were busy rigging baits to catch up and give it a shoot at the sailies.

By late morning we released one solitary fish and shortly after had a pack attack with two fish on the teaser and one on the long´s, all switched but two lazy pick up´s did not connect and we only hooked one which we released.

Then after two hours of not seeing one but again lots of gamefish we found them in good in the afternoon as the wind switched direction and settled.

First, we had one come on a lure miss it twice then come a third time peel some meters jump and come undone.

Fifteen minutes later raised one on the teaser that did not switch and five minutes later another fussy fish that picked at a bait twice and would not eat it. They were really picky and difficult on the day. But, then a second fish come up on a long while the other was still messing around the pitch, hooked and released that one.

Just before 2pm Ian released one on the pitch that marked our third for the day and the 50th for the trip.

After a few pictures and celebrations on that one we set them up again.

Ten minutes later we, again, had one miss the lure and five minutes later we hooked into a nice doggie on a bait and a bonnie on a lure. With the boat just idling we saw a sailfish right behind the transom, pitched a bait and released the 4th for the day.

An hour later we had two fish climbing all over the teaser and madly chasing it all the way to the boat. Myself and Ian pitched and this time we did not miss and released both fish to make it six for the day.

We still missed another fish just before lines out around 4.

Back at the yacht Doctor decided to have another night session and got some nice jobfish, snapper and a 12 kg GT on the light tackle straight away. It was incredible to have this much fish at the anchorage which was mostly sand with a few reef outcrops scattered around.

Not to be outdone Neil got into it and also smashed it with a few snappers, jobfish and a couple of GT´s. He even hooked and released two fish on one drop when he used a jig as a weight to a baited hook! A snapper on the bait and a jobfish on the jig! It was insane and non-stop and this while at the anchorage! It was a pity we did not have the energy the previous days seeing I bet if we had plugged from the anchored yacht at sunrise and sunset and jigged at night we would have had some surprises, like that big GT that almost spooled and eventually reefed Doc a couple nights earlier.

Again, some wind in the morning but, as it seems to be the norm here, it calmed down before noon.

Unfortunately, this was to be our last morning on the banks. Difficult to leave such a bite but the plan was to leave for the Radamas Archipelago and Nosy Lava, 55 miles to the SE, to finish the last 4 days doing some GT fishing and light tackle spinning.

In retrospective, it was the wrong call!

We did not have much time left so we left at first light.

At 7h20 we had a pack attack but only got two bites on the pitch and released both.

Then it was real slow until just after 9 when we once again had a bunch of them up and again but only two bites on the pitch, one of which we missed one but released the other.

An hour later we got a bite on the long lure and released the third for the day.

By now the gamefish where wild and we got a bunch of bonnies and YFT for strip baits, wahoo, rainbow runner and five dogtooth tuna up to about 15 kilos and lost a real nice one. We also had a beast of a doggie that took a hooked bonito and jumped out the water and another that cut a wahoo in half. They were busting right, left & center on the teaser, which was very cool to see.

Exactly an hour after releasing the last sailfish we had a serious pack attack, they were all over the place and we had 3 bites but missed one on the lure but hooked and released both on the pitch.

We did not have much time to go but sitting at 59 we all hoped to make it to 60 fish for the trip as we made our way back to ADIVA.

We did not have to wait long and the potential 60th sailfish for the trip come on the teaser, we pitched, hooked up and release.

Straight after we had another three up and got two bites out of them. For the second-time on the day, Manu, got overly excited and closed the bail straight after the strike and we missed that one. But, senor Ian on his Trinidad did not miss and released our 61st and last Sailfish for the 5 ½ day trip to the Costa Banks.

We left the banks in what where now flat calm seas on a 187-degree course for the 55 miles to Nosy Iranja Island where we would sleep before heading out to the Radamas early morning the next day. After 5 ½ days of frenetic fishing we all appreciated the peace, quiet and solitude of the Ocean as we sailed south.

We enjoyed a few whiskies’ that night, a nice barbecue and as Ian put it, “living life as it should be lived“!

We set anchor around 9pm and for the first time in 6 days we woke up with land in sight.

And, what a beautiful place Nosy Iranja turned out to be.

Our plan was to fish the Radamas Archipelago on the first day and push further south to Nosy Lava which, from Ian´s extensive Madagascar experience, produces some first-rate GT fishing. On his normal 2-week GT trips to the area this is where he starts fishing but still pushes way south of that to some pretty remote and wild GT areas. However, because there was a strong wind forecast for that evening we had to change plans and fish the Radamas for the next three days instead.

In the end, we should have stayed at the banks and would have been really interesting to try and push the sailies to the 100-fish mark and /or to plug around there for GT´s and dogtooth and all other gamefish that where obviously in great numbers. We left fish to find fish and paid the price for it.

The fishing at the Radamas turned out to be pretty average and hard work.

Even the light tackle spinning at the river mouth, where Doc told me they were on cast for cast on various species on the previous trip, was mediocre. That did not stop any of us to plug from first light to sunset and there were a few good gamefish and a few small GT´s up to about 17 kilos along with some good size Bluefin trevally, but nothing much to write about.

The initial plan was to fish Saturday morning and then run all the way to Nosy be on the fishing boat.

But with average fishing and with everyone pretty tired we decided to rather sail the 9-hour trip on ADIVA and just relax and enjoy our last day at sea in an extremely peaceful setting.

Really glad we did as after such a trip, the soothing time as we sailed back in flat calm seas just really put the all trip in perspective and it was great to see the beautiful coastline.

We sailed past many interesting places and outcrops that reminded me of Bom Bom. We went pass Lemor Island and Ganja beach, which apparently is where the babaguire lovers come and chill. By noon we set down to a peaceful and delicious lunch at Crater Bay, of a superb masala kind of chicken that chef Guy magically produced in the galley!

Back at the anchorage it we spend about an hour and a half sorting the tackle. Quiet a fit trying to separate everything that was going and staying behind and putting up to seven rods in a single tube…talk about a puzzle!

That evening produced one of the most beautiful sunset´s I have seen and the light was just superbly magical. It was a fit end to the trip and myself and Doc went into the surprisingly warm water for one last swim.

The days had rolled by and hard to believe we were on our way out, the next day we woke up to flat calm seas and all I could think about was how I wish we were pulling anchor to sail to the costa Banks once again.

But, it was time to go, have a walk and buy some presents for the family, get in the car and drive to the airport for the ludicrous, almost surreal, experience of it all.

It takes good planning on many levels but this is certainly a special trip which I highly recommend to anyone.

I am so impressed that I am planning to run a few trips there myself between May and July of next year, anyone interested to book please contact me at dudas7mares@gmail.com or the phone numbers at the bottom.

Now it´s back to Vilankulos to move house, do a few light tackle charters in August and get both Boats (Vamizi & IBO) and gear ready for the heavy tackle season from mid-September.

Yeah, almost that very special time of the year again 🙂