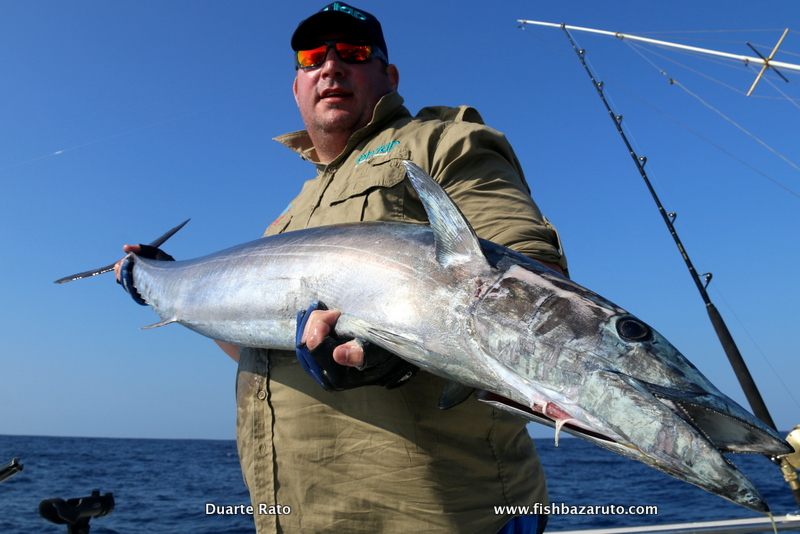 Early May Vilankulos Wahoo and much more…

The placid, absolute flat water conditions continued as we started for 5 days in early May with Klinton Pretorius and four mates from South Africa and it was nice to see some nice size early Vilankulos wahoo.

Overall it fishing was pretty challenging for us and everyone else. Guess the persistent mild conditions combined with the lack of current and high temperatures for the time of year is was making things rather quiet with an unusual lack of bait or anything else on the surface. The wind was continuously blowing from the SW to SE and thus the lack of current and water visibility was the best I have seen in a long time, all the way to the backline. The two days that we had a gentle wind from the NE turned things around and we got into some really nice early wahoo.

We mixed up between conventional light tackle, spinning and popping.

We fished south every single day seeing the guys up north where struggling even more and overall and given the hard conditions we did OK. The first day we got a couple Great barracudas on small jube jube live baits, then caught a bunch of YFT on the troll and a couple king mackerel, a small GT and queenfish, all on popper. But, the highlight of the day was when we had a sailfish come on George´s popper right on top of number two. It followed and billed the Rooster popper all the way to the boat, pretty cool to see.

Then on our second day, while we were fruitlessly looking for jube jube´s at number. 2 pinnacle, Drop Your Rods radioed and told us they were getting thick into some big wahoo on the outside of Marlin pinnacles. On our way, there we picked up a good fish of 24 kilos but the bite slowed down when we got to the area. Meanwhile the guys on the other boat had a Black of about 500 pounds take a skipjack they were pulling in on the light tackle. That lasted for about 20 minutes before the #20 line parted on the TLD. We stayed in the area waiting for the bite to come back, picking a few YFT and skipjack during the day. At 2pm the wahoo come thick and fast we multiple and triple strikes the norm, all good fish between around 15 to 22 kilos.

The rest of our three days with the East London boys fishing out of Vilankulos was pretty much the same, long spells of nothing with some really fast & furious big wahoo action which normally lasted between an hour or two. But it was really cool and fast, as only big Vilankulos wahoo on light tackle can be. Mostly we had multiple strikes but the best was when we had 5 on at the same time, all fish ranging between 15 to 20 kilo. Talk about chaos on the deck but the boys did really well landing four of them.

In between that we picked a few small Yellowfin tuna, skipjacks, cuda and missed two sailies and had three Marlin up, all rather small fish.

The first, a very little guy of about 20 kilos we hooked up on a rapala early on the morning of the third day, pulled on the small trebles as he was doing the upside-down acrobatics those small fish do. The second was a lazy fish that come on the long right, took a swipe, missed and did not come for seconds. All the billfish we raised where really lazy except the last one.

Thirty minutes before lines in on the last day, we had missed a saily early morning, then caught a good Yellowfin and four nice vilankulos wahoo down south. Late afternoon I decided to work the southern edge of the canyon to try and end it in style. We missed a bite on the shotgun but could not ID the fish. I worked the area and 15 minutes later we have a 60 kilo Black come in hot on the short right Blue & White Ilander big ballyhoo combo. The fish took it from the inside out and jumped straight away. Beautiful sight and special for the guys to see as no one on the baoat had ever caught a Marlin. Unfortunately it did not find steel and the grand finale I was hoping so seemed to fade away….or so I thought!

We pulled the lines in and Klinton asked if we could through a few poppers at Magaruque where we had released a couple small and missed one big GT on the trip. I told him the tide was wrong, but seeing we were gonna go pass it anyway, it was neaps and I really wanted to have a last shot at giving this guy’s something special to finished it off, when we got there I told the guys to have 5 casts.

I mean it sounds like a lot of action and that it was good, but there were lots of waiting periods in between bites and it was just slow for Bazaruto standards, these guys deserved better!

Klinton and George worked the poppers and on the fourth cast George, who had worked that popper more than anyone else on the trip, hooked up to a good fish. Drag as tight as could be we pulled the fish off the reef and once we got off it I felt much better. Goerge was puffing and wheezing on this mano a mano tug of war. But, after a while we saw color and eventually got this GT of about 22 kilos for a release. Not a monster but a pretty respectable one, especially for George, who being an experienced surf fisherman, was on his fist ever deep sea trip. He later told me that he had never experienced anything like it and this was by far the best fight and fish he as ever caught.

That´s all you want to hear when the guys are leaving, especially when they did not remotely experience what Bazaruto can and frequently delivers.