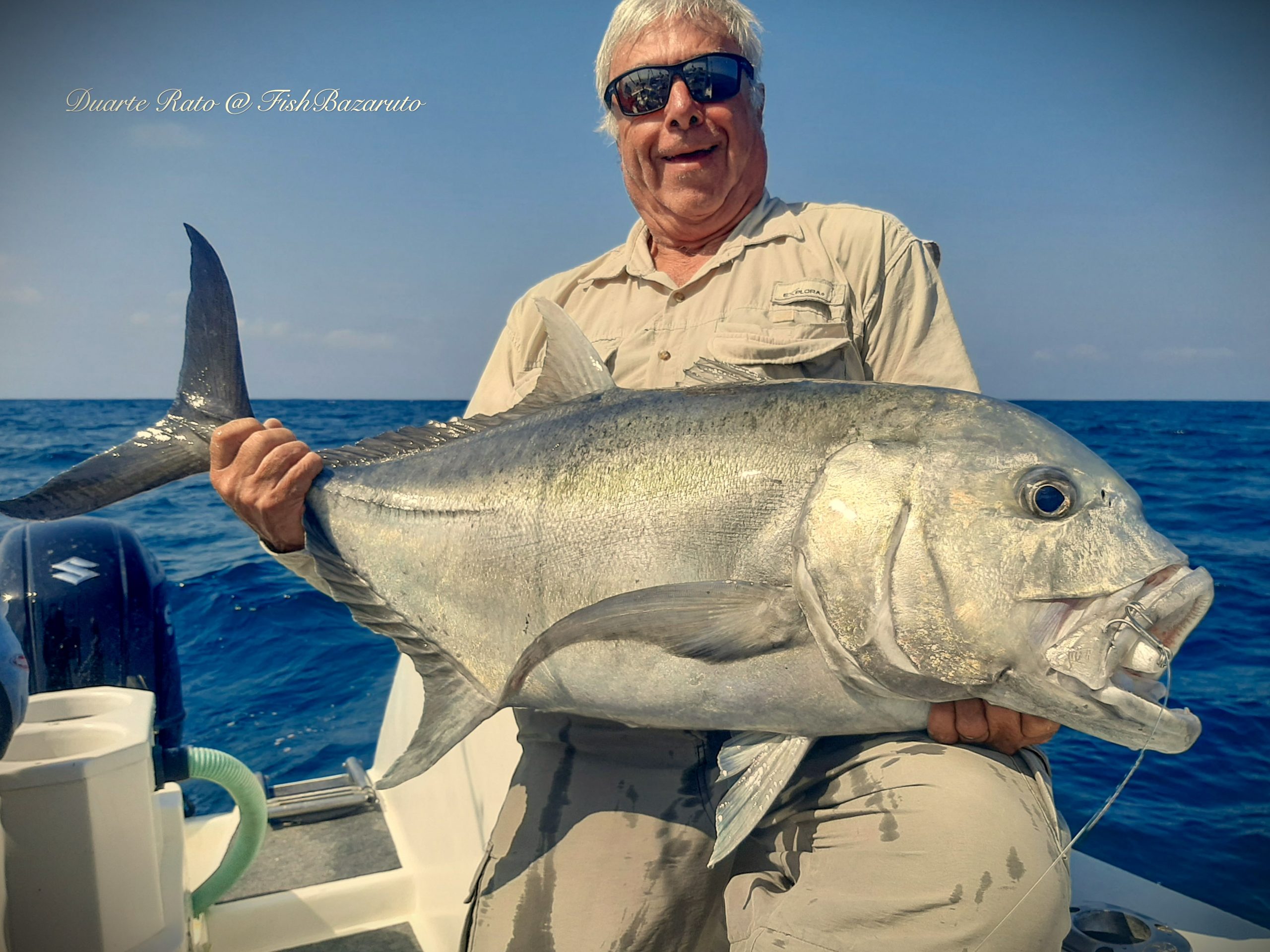 Carlos with his best ever GT release with FishBazaruto.com. Carlos also got his biggest marlin at 550.

Just finished with Pablo Pebe from Uruguay and Carlos Bandano from Argentina and who got to get their first GT´s and biggest Marlin to date at #550 pounds.

We had fished with Pablo twice before and here´s the report from his last Bazaruto trip!

Pablo Pebe with his first GT caught on a weird-looking lure that I had never used before and had my doubts about, which were short-lived. The Whopper plopper certainly raised them up and got a few enquiries and releases. Nice sounding lure for sure!!!

Seeing the Marlin bite as slowed a tad this last few days, we did some popping sessions everyday which were really nice with some great action and we had what was the longest fight I have ever had with a GT!

We had a nice day where Pablo got to release a Sailfish amongst some jumbo size YFT we saw busting in the deep. There was some wahoo action as well and picked a few skipjack but decided to finish the day with a popping session.

Second cast on to the fusiliers with the #Darkstar Cubera and this fish miss it twice and then got it proper. As you want it, it swam of the reef into deeper water.

At one stage we had it probably 8 meters from the boat.

So close yet so far…

Long story short after 55 minutes the #130 leader chafed and we lost the fish. Sad story but great to see a beast like this. I can only remember one GT which we had for more than 30 minutes ever and the biggest we have released of the Archipelago was 148 cm!

Pablo 35 minutes into the mother of all GT’s. The fish finally won its freedom after 55 minutes after breaking/chaffing the leader with what we believe was his tail. Story not to be forgotten!!!

The next two days we had a few more popping sessions and they were pretty good with both Pablo and Carlos getting their biggest GT´s along with some other nice fish and many boils, pulled and reefed Geet´s.

Carlos with his first and biggest GT of the trip which took the popper. There was 3 fish after it at the same time and this was inhaled it good and proper!!!

The biggest fish they for the trip was a #550 Black for Carlos.

We were working deep with the lures amongst skipjack and nice size YFT.

Alberto went to the bow with the spinning rod and we hooked and caught a skipjack which we immediately live baited.

It took all of 5 minutes for the bite!

Carlos for in the chair and this #550 started greyhounding and we had a great 20-minute rodeo as this fish just stayed on top and gave us a spectacular fight.

Unfortunately, no good pictures as things were happening fast & furious!

But in the end, we got Carlos biggest Marlin to date by far and on a real fun fish!

The only pic we got of Carlos biggest Marlin which we estimated at 550 pounds.

Absolutely great people to fish with, some wonderful days in hard conditions where we really made the most of it…

It’s a long trip from South America but so coo,l having you guys and looking forward to next time…

Bookings are full for this 2022 marlin assault off Bazaruto Island and surrounds. But get in touch to enjoy the next year or even year after. Or catch a ride on the blue marlin express coming up off Inhaca. Or the sailfish when they come and take over in May and June back up in Baz.

Find us at FishBazaruto.com and or The Sardine News.