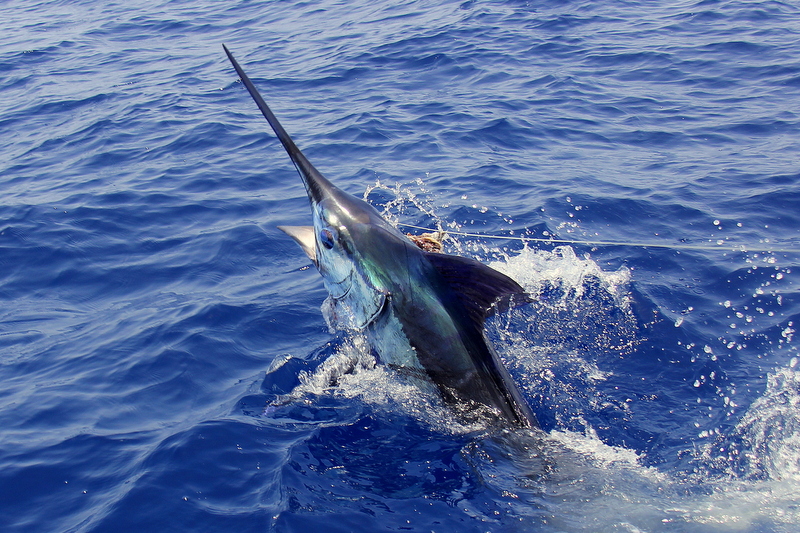 The Mozambique Blue Marlin bite has been on top form this season and it just seems to get better. Although it´s been good since late last year and certainly sizzling from early in the new year, it recently, heated up few notches, into the blazing dwells of absolute red-hot fishing!

The weather, which has been pretty unstable for the last couple of months due to all the systems moving in from Madagascar, is finally subsiding and the unusual high water temperatures are also coming down to normal digits, this might partially explain the sudden exponential presence of fish.

However, the undeniable fact is that the unusual weather patterns and heavy rains the southern end of the country experienced from early January, have churned up the ocean surface into a nutrient rich soup.

All the way from the Bazaruto Archipelago to the southern tip of the country and beyond we getting reports of massive schools of tiny baitfish such as oceanic anchovies and the likes covering the likely spots. This is obviously being fed by all kinds of bait and game fish, especially all the tuna species, mackerel’s, dorado and wahoo. Not far behind, and fortunately for us, it also brought an unusual number of bigger than average Marlin, and in some areas fantastic numbers of fish, mostly Blue Marlin with a good number of stripes and a few Black´s into the mix.

This seems to be happening in most of Africa´s east coast and definitely all over Mozambique Blue Marlin southern coast territory – however, the area down south by Maputo / Inhaca has just been experiencing this bite at a complete different level!

From what I have experienced on the area and, mostly from what I speak to many friends that fish it regularly, has I have been speculating for sometime, this area certainly seems to have the ability to produce record numbers that equal or surpasses the top, more established Blue Marlin fisheries the World over.

The one day, recent tournament held last Saturday, the 18th March, just proved this in a preposterous way. Thirteen boats entered the event, of which three where mostly fishing for the game fish division. The ten remaining boats that fished for Marlin released 34 for the day. Most of the fish where Blues, with a lot of Striped and even a few Black´s. Yes, a grand slam is a fairly common occurrence here, with a very distinct possibility of a super grand slam seeing sailfish are also regularly caught.

Much more remarkable on the amount they releasing is the absolute insane numbers of fish they are raising and missing a day, absolutely ludicrous in anyone´s book. On Saturday alone the ten boats raised about 130 Marlin! Let´s remember that this is weekend warriors and no professional charter boats / crews are involved. The local standard operating modus is to troll big Marlin lures on heavy outfits, some lure / J-Hook rigged bait combinations and from the reports, everyone is experiencing an abysmal hookup ratio on this technique. Last Saturday alone most boats had between 10 to 16 strikes during the day, with some boats reporting raising 20 plus fish!

It really boggles the mind on the even better numbers this fishery could deliver with more experienced crews and if techniques would be tried and adjusted to a more successful hookup ratio – either by using smaller lures and hooks (which some of the guys are doing) or more realistically by either switch baiting or trolling circle hook rigged baits. This is a numbers destination and despite there being the odd big fish and not unusual for 500 pounders to show up, most Blues tend to be in the 2-400-pound range and the stripes between 100 to 160 pounds. It makes sense to go light, easy and natural…

Yolanda won the event with the release of 7 fish, four Blues and three stripes. However, they reported sixteen bites and over thirty raised fish – they said they lost count.

Then there were two boats with 5 releases; Hakuna Matata released 3 blues and 2 striped and Aquamarine 2 Blues and 3 stripes.

Gabri got 4 fish on the day. They released a blue and two Blacks and had another Blue die on them, which got tail wrapped and could not be revived.

The guys aboard Fourplay released 3 Blues, out of 12 they either missed or pulled – and they had 19 fish up for the day.

Other fish reported where a Black by Cheetah out of three bites, and they only fished until 9am. Nakisai also released 2 Blues amongst a number of strikes. Nana released two Blues and had another one sharked by an Oceanic Whitetip, the first ever time I have heard of a fish being sharked out wide in this fishery´s. They also lost another right by the leader, and reported about 15 bites! Another boat that reported a similar number of fish on the day was Mon Ami, although they failed to convert those except on one striped they released out of the whole lot. Bite Me II released two Blues, as well as DanDan.

That´s an average of more than 3 Marlin per boat per day and not a single one of the ten boats that where specifically targeting Marlin skunked! Again, this is weekend anglers, mostly fishing out of small outboard powered trailer boats! The mind wonders… 🙂

Congrats to everyone involved, really EPIC day and great numbers and effort!

I have, over the last couple of days, spoken to a few of the guys, many of them having just enjoyed their best ever Marlin fishing day out there. One could hear the excitement, elation and absolute wonder at what they have just experienced. Most kept telling me it was just like fishing for schooling tuna…but they were MARLIN! Hardly ten minutes went by without action. Double, triple and quadruple strikes where the norm.

Even, when I mention above that one could probably improve the catch ratio substantially by adopting other techniques, nothing can be taken away from this amazing bunch of dedicated anglers. Most of them are very dear friends who I have known for years and who are as enthusiastic as one can be. Although a few are well travelled and have been Marlin fishing round the World, most where taken by absolute surprise when they stamped across this remarkable fishery a few years back. This was a pretty new scenario from the light tackle game fishing they were used to do. Without the privilege of having the right gear, professional crews around to pick up and learn, they did it the hard way of learning by trial and error. What they have come up, the fisheries they have put on the map and how they have progressed over the last few years is nothing short of spectacular and a true expression of dedication.

So once again, well done guys!

Here´s a list as I could gather from the boys…some info might be slightly wrong has the crews and club, unfortunately, do not differentiate between the different marlin species released during the event;