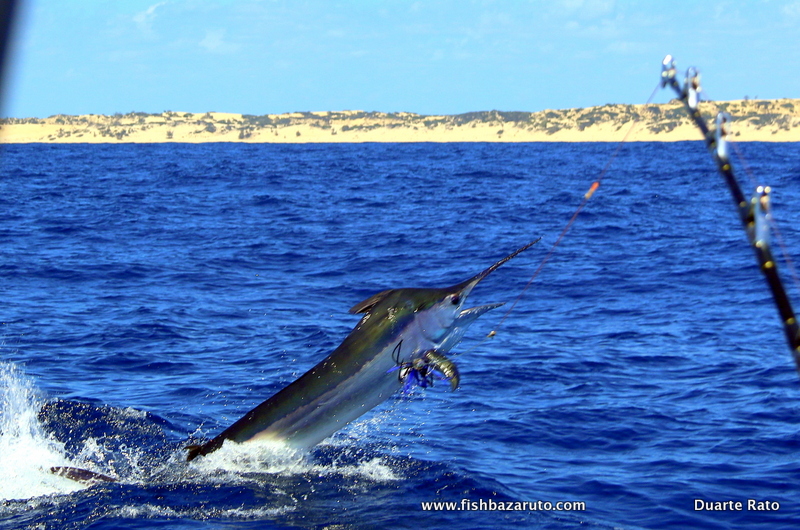 After 3 days of being land sick started with Pablo Pepe and Carla Papone from Uruguay on the 9th of November. Their second trip to Bazaruto having fished with me out of VIlankulos, on the 38ft Game Changer, two years ago.

There was a stiff southerly blowing in the morning but the sea was pretty good. We tried to get bait for 15 minutes but there were no birds around and so we set the lures out.

Not more than 3 minutes elapsed and we hooked up on the long corner Bonito Smoker by pulsator. Right on! Pablo jumped in the chair and quickly brought in the small fish for a release.

Small or not that´s the proper way to start a new charter. Black Marlin tagged and released within 5 minutes of fishing and before 7am!!!

Got a couple skipjack and then moved north. Wanted to work the area where we had that 700 on the bait for 36 mins the last day we fished. Not kidding. As we made the first pass, not 100 meters from the mark a nice fish bites out long left. It missed but comes and we hook up. This thing goes for the races. Jumping more like a blue than a black it put us on the backing at warp speed.

Turn and chase and get everything under control. Nice looking fish looking to be 650 or more. 22 minutes into it we have the dacron loop in. The fish is about 20 meters away, starts coming up, changes direction and the hook pulls. Bad luck.

We then had a wahoo and started working south as the wind changed to the SE and picked up. At Giants we have a sailfish come and knock the big T tube on the short right, then the smoker on the left and finally hooks up on the express on the long. Pablo makes short work and we release the sailfish.

Just before two we pick a real nice and strong skipjack which we bait. Within 20 minutes we raise a mid-ranger that´s on the bait for about 12 minutes but we get no bite out of it. There´s just jube jube schools everywhere and the fish must be full. The amount of fish on the livies that are not biting or eating them is staggering.

We pull that bait until 15h30 and take it out in 35 meters out of II mile. Head home, not fireworks but 1 for 2 and raised another plus a sailfish. Bad luck on the nice fish which would have, by far, being Pablo´s biggest to date…and his got 83!

The second day we had a breeze from the SSE but it turned out to be a real nice day, water a tad warmer at 25.4c and deep electric blue. Unlike yesterday very no bait as we started at V mile so we tacked north. Got a skipjack but badly hooked. Went further north. Worked the area where we had the nice fish yesterday. Again, we were there for two or three turns and hookup. Small fish but a fish non-the less which we released quickly.

Worked there for an hour then found loads of bait on the northern edge of sailfish. Man was there bait! Those jube-jube (frigate bonito) are just all over. From 35 meters to 180 meters. Between Sailfish to Amberjack, dozens of pods with zillions of them. Just incredible and don’t think I have ever seen it like this. Very little other bait but those things are just all over the place and the fish must be gorging on them. Between Sailfish and Nhangosse we had a fish come up. Again, a small one, but who´s complaining!

It come on the Long corner bonito smoker miss it. About 20 seconds later come up on the express, hookup and released the 150-pounder. The afternoon was slow, we caught a wahoo out of a double. We finished early as I had to do some work on the riggers.

Very slow for everyone else, Christiaan fishing on Game Changer with our other guests raise one on a lure that did not bite and Charles on Marlin a small one on a bite but also no bite out of it.

Again, not fireworks but we getting it done without 17 Marlin release in the last 9 days!!!

Well, day three was our last day with Pablo and seeing we had a shorter day we went out earlier than usual. It was a crazy day but the bastards are just full of Jube Jube´s and freaking lazy.

We ended 1 for 3 but raising 8 but more likely 10 fish on the day. There was two knock down´s we never ID but it’s not like we getting any other fish on the lure so pretty sure they were Marlin as well.

06h35 – a #200 knock´s the bonito smoker then the Marlin Magnet, but this thing is so lazy I want to cry!!!! This is at VI mile and just then I see some birds and we have a double YFT strike.

One comes off but we bait the other. Quiet a big bait at 8 kilos…

07h25 – bait goes deep, real nervous. For 5 minutes it´s stretching and going ape shit. I know there´s a small fish on it, too small for the bait. Call Christian on the radio and tell him to do a few passes behind me with the lures. Maybe he can hook this one.

Bait chills and then 10 minutes later again it goes berserk!

Probably still the same fish, see it flashing. All 100 pounds of it. No bite out of it for sure!

08h16 – We get into the zone we have been having most of the fish on the southern edge of Sailfish Bay. 64 meters and we get a bite on the big YFT. We come up after 5 seconds and load up. Lazy run. Then it just goes ballistic and a #600-pound fish jumps.

Fuck yeah….we start gaining line then it goes off again and jumps and we see the bait go flying. This thing obviously put it down the hatch very fast and was just holding it in its stomach. It´s a problem with these big baits if they go down all the way. When they start turning they just contract that stomach and hold on to it. Then spit it out….ohhhhhhhhh disappointing!

Ok, put the lures out!

09h43 – Back in the zone and in 62 meters we get an awesome bite on the short corner riggler. Not lazy this one. We hookup and in a few minutes, bring this thing to the leader. Then the real fun starts. Little crazy guy starts jumping all the way. I am going fast and it’s just going crazy. Turns on us and goes right over the transom. Missing the engines by an inch. Yeahhhhh.

10h24 – Raised one on the Ruckus, this thing comes and has a look twice. Lazy bastard does not even take half a swipe!!!

11h32 – knockdown on express, fucker does not come back! Lazy bugger´s…

13h35 – Move to where we had the first bite in the morning. After a gorgeous clam day, the ESE is pumping now. We get a bite. Again, on the riggler. Hookup. Clear the lines. Almost at the dacron loop it jumps towards us. Three, four, five times. Then the hook pulls.

Christian on Game Changer pulled the hooks on a small one, raise a nice one that did not chow on a bait and raised another at V mile later on lure no bite.

Three days with Pablo and we raised 14, got 7 bites and released 4 plus a sailfish…

Got a big blow coming and then we start with Carl, Tony and Louwtjie..