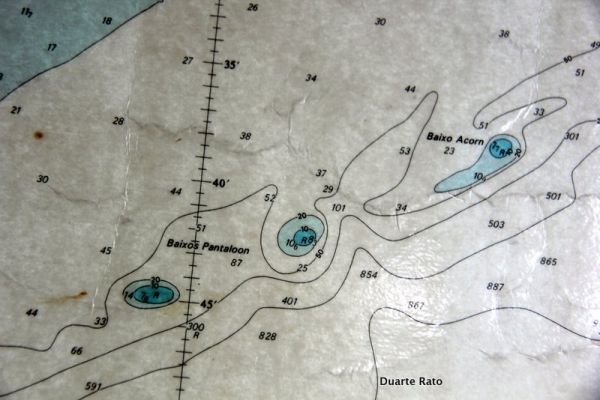 Here´s a small report from live aboard week trip we did at the end of April to the offshore waters of Quelimane. Myself and regular clients that fish at bazaruto with me (who are above all great friends) did the trip aboard the 42ft motor yacht cat `Àdventurer` and the aim was to fish for all species on spinnning, plug, jig and dropshot…but mostly and foremost to target big GT´s on plug and stick baits along a series of remote offshore banks running north of Quelimane for over a 100 NM all the way to Ilha do Fogo. These are pretty un-fished and out of the way banks that take some serious logistical planning to get to…and while offshore we never saw a single other vessel.

As you can see from the area´s chart these banks come from serious depths on their offshore side, sometimes over 600 meters in a couple of miles to as shallow as 7 meters.

Starting from South to North one has the two pantallon Reef´s followed by Acorn reef….

… then the 2 Davide´s reef and the last of the lot being Lacerda. After which there are a number of inshore reefs running north before coming to the Sylvia shoals and Fogo Island.

Our Itinerary was to fish all the way north, spend a night at Fogo Island and then turn around and fish the banks all the way back….that was the plan but mother nature had very different plans for us!!!

After a delayed flight from LAM we arrived in Quelimane on the afternoon of the 25th April and after a 20 minute, seriously chaotic ride on windowless, exhaust pipe dragging and run down has you can not believe taxis finally arrived to the fishing dock and boarded our home for the next week.

Very shortly we started our 2-hour trip to the river mouth, the plan being to sail all night and arrive at Pantallon reef the following morning. As you can imagine we were all very excited and rigging all the tonnes of tackle we had brought with has fast as they could.

Unfortunately, compliments of LAM (who by the way had also lost some of our fishing rods on the previous flight), we could not navigate the mouth on the outgoing tide and set anchor at 10pm to enjoy a juicy prawn dinner and the unfailing double Black’s!!! This meant we would loose the first morning fishing, but spirits were still high!

We eventually pulled anchor and made our way through the river mouth at 1am and set slowly making our way to Pantallon.

By sunrise it was clear that all the weather forecasts were not accurate as the wind was now howling at 25 knots, double what was predicted. By lunch time the wind had gone up to over 30 and with huge swells we decided that it would be insane to go offshore and fish in this weather and the most sensible and safest option was to run all the way down to the first protected anchoring, Ilha do Fogo, roughly 110 miles away!

Yup, this was extreme to say the least! The guys were all suffering from ´Mal de mer and the next 28 hours off being bashed around and managing to do little more than 5 knots was probably the longest that we ever experienced.

We had not even bothered to put any lines out, but just before sunset it had quieten down a bit and as soon as we set three lines with Halcos and rappies we got a double strike. One fish got off but Philip had a nice one…

…a 20 kilo plus YFT that gave us some awesome seared tuna and sashimi for the next day!

The wind, once again come up during the night and after being bashed a tad more we finally set anchor on the leeward side of Fogo Island at 3 am.

It was not where we wanted to be, but under the circumstances we were all happy to be safe and sound and most of all protected!!!

I was so excited to fish that as soon has there was light and while everyone was sleeping I rigged a 100grs bobara stick bait and went to the bow. On my second cast I got a small torpedo scad which I rigged as a drifting live bait…but that was about it!

When the sun come up it was disappointing to see that the water was a horrible muddy colour, surely caused by the high winds and swells and has it would prove over the next days it would be very difficult to get anything to bite in such conditions.

After all we had been through it was utterly disappointing to realise that this was no small system, which meant we were going to be stranded on the island for a while and that the fishing, which we told can be decent around the island, was at a high low!

That afternoon we venture to the protected reef to fish for an hour but only had a few chases and even fewer bites.

I got a nice largemouth talang queenfish…

…and Peter a bluefin kingfish!

With such depressing conditions every night was a feast of food and wine followed by free flowing hard liqueur. At least we had great company and entertainment, an awesome bunch of guys who were making the most of a very sad and unexpected situation.

The next day afternoon it looked a bit better and we bashed out to Sylvia shoal, about an hour away. Doug who had done the trip last year said they had experienced their best GT fishing there and when we got there we could see why. The place just looked fantastic, a small sandbank nestled by a huge coral atoll and a massive shipwreck.

A couple chases again, two hook up´s but only a small torpedo scad to show for our efforts. Yeah, definitely not what we come here for!!!

The shipwreck at Sylvia shoal!!!

Every night we used the satellite phone to get weather updates, which were wrong to say the least. I had phoned a friend in Maputo who looked at more serious sites and satellite images and we now knew this was a big system that had moved across from Madagascar and was sitting right on top of us.

The next day was again spent lazily on the boat and we took the small Dingy to walk around Fogo Island…mostly in the rain!!!

The small Island, which one can walk around in less than an hour, is absolutely beautiful. Surrounded by a coral barrier it as flat calm saltwater lagoons and it looks very very fishy. This is a protected area, but like so many other places in Mozambique there is no enforcement and it was sad to see seasonal local fisherman fishing and netting around it, drying fish and loads of Octopus.

A small lodge was built on the island a few years back but destroyed during a cyclone in February 2012. It was a pity to see the ruins of it along with a big sportfisher buried in the sand.

That afternoon the sky to the SE started to clear up and a quick call on the satellite phone to my mate in Maputo confirmed that the system was moving on and that we should have calm, clear weather for the next three days (again the forecast was wrond as we were to find out).

A quick decision was made to leave straight away. The plan was to anchor at Sylvia shoal, enjoy supper and then pull anchor and depart the shoal at midnight to arrive at lacerda, the first, most northerly bank at sunrise.

We had an absolutely beautiful sunrise and spirits were high!!!

But, luck was certainly not on our side and when we tried to pull anchor at midnight it was truly stuck and we had to wait till morning to get it out.

And that was not fun, diving on scuba gear, alone, in the middle of nowhere with a meter visibility at 5h30 am was sh!t scary to say the least…but at last long we were leaving and heading towards the banks.

Again we lost more than half the day travelling but finally there was some light at the end of the tunnel as the water visibility got better and better as we moved southwards.

We trolled a couple Halcos and a big Hawaian eye as we travelled and had a few fish, including a on and off small Black Marlin. Again, we kept a yellowfin for seared tuna and sashimi supplies.

We finally got to lacerda and found some nice showings and started catching fish non-stop, the only problem was that the area was literally infested with small to medium sizes Black tip sharks that took everything from poppers to drop shots and stick baits…

We were getting other a lot of other fish as well and even tough the sharks were not taking any they were absolutely destroying our tackle. In this mayhem, when all four guys got stuck into fish two line got wrapped around the propeller and shaft

Yeah, with Hobba sharks around I had to get in the water to sort out the mess for the second time that day. We had the remains of the YFT carcass we caught earlier, which I sent drifting on the water as a decoy, and for the next 15 minutes cut away a bird’s nest mayhem so that we could be on our way.

OK, up until now this must sound as a very depressing and shitty trip….and it was!

But I hope you still reading because the little fishing we experienced after this, even if only for 7 hours was absolutely insane and worth every minute of what we had to endure on this trip.

It was so good and obviously just a sniff of what this place can produce that even tough the guys only managed to seriously fish for a total of 9 hours on what was supposed to be a week trip, they are all keen to come back next year….and so am I!!!!

With all the sharks around we decided to leave Lacerda and do the two hour trip to Davides. The water colour was getting better and better and the trolling rods would not stop, so much that we eventually decided to take them out as they were delaying us.