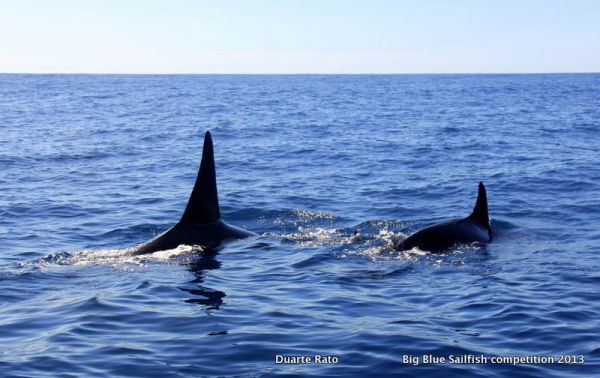 Alohas from the Bazaruto Archipelago…

We have just had the Big Blue Sailfish competition at Vilankulos last week and even tough the fish did not really play ball and we had pretty unusual (for this time of the year) rough weather for the two first days (and flat calm for the remaining three), I would like to share a few pics of the comp and also off a rare encounter with Orcas (killer whales) we had on one of the days.

During the Captain´s meeting on Sunday afternoon it was already known that due to a low-pressure system pushing from the SE, the first competition day (Monday the 6th of May) was going to be a blowout…as you can imagine that ensure a very festive meeting into the late hours of the night with the Aguia Negra Bar trying to keep up with the, by now, not so bright and very loud competitors.

Regrettably, a couple of boats had pulled out at the last minute and only 6 teams participated on this event. All of which, now rather cured from the previous day babalaz and despite the crap weather that was still being felt on Tuesday morning, were keen to get out to sea.

The boats that decided to get out into the deep were greeted by a very big swell, high winds and heavy rain. Very quickly most decided that it would be a much more sensible, not to mention comfortable option to rather spend the day drowning their sorrows at Benguerra Lodge beach bar.

It might have been sensible but surprisingly the sailfish had different ideas and decided that the best time to bite for the whole week would be in that stormy weather. Braving the mayhem sea team Shakina were lucky to have experienced the best bite of the week – but rather unlucky to have missed, dropped or lost to tackle failure all 6 sailfish they raised during the day. To top it up they also lost a nice Black marlin estimated at 400 pounds due to tackle failure – can’t take a knife to a gun fight or you get…

Blue Marlin also persisted and enjoyed some good action and was rewarded with the first sailfish release of the competition, giving them the lead with 100 points

The wind dropped that night and Wednesday dawned beautifully. The 6-boat fleet run north to the area where Shakina & Blue Marlin experienced the fast bite the previous day. There was still a big swell in the morning as boats navigated the shallow waters out of II and V mile to start the day’s fishing.

Within 15 minutes Louis and Francois on Dreamcatcher dropped a sailfish between II and V mile, an auspicious started – or so everyone thought!

But that was not to be and has the weather settled and the ocean become flat calm, so did the fishing and the few sailfish that were raised were either to lazy to bite or would do so half hearted, and hook-ups were scarce.

An exception to that was Wynand´s Z-craft ´Cool Runnings´ that managed a double hook-up out of a triple strike in mid morning deep off VI mile reef.
They successfully released both fish giving them 210 points.

Shakina again experienced some bad luck dropping a couple of sailfish – but at last were rewarded with a release and a place in the scoreboard with 100 points.

That afternoon a few boats met at the north point of Benguerra and got on drop´your rods for a few drink and the festivities aboard Shakina, after they broke their bad luck spell, could be heard from miles away. The camaraderie and friendly nature of this competition that makes it such a fun event was in full swing…

Most boats had either dropped or raised sailfish, but in an area where one can realistically expect to raise anywhere between 5 to well over 30 sailfish a day when the bite is going hot, it was utterly disappointing not to have more action, especially when reports from the previous week had been so encouraging.

That’s fishing – and everyone was still having a great time!!!!

Flat calm weather once again greeted all participants on Thursday morning. This time the fleet spread wide, with some boats going north to V mile, Sailfish Bay and Lighthouse area and others south to the canyon, San Sebastian and Linene.

Again, most boats raised / dropped sailfish but they were few and far in between and really lazy. With flat calm blue water in the mid 25c (a bit to high for sailies in the archipelago) conditions looked good, but in my opinion the fishes lethargy could probably be due to greediness and full belly’s – as there were gargantuan amounts of bait everywhere all day long, everyday – both on the surface and the sounder. We also had a counter current coming from the south created by all the SE that blow previously – this is not necessarily bad except that it was flowing very slowly and slow or no current is NEVER a good thing for billfish (in my books)..

We, on Spanish Fly started the day at the canyon and slowly made our way south to the pinnacles outside Linene area. It was a slow morning with a few cuda and dorado bites, but seeing we were using circle hooks those did not materialize in hook-up’s but rather cut off´s!

At about 10am we saw some commotion ahead of us in 50 meters of water and when approaching were stunned to see a pod of Orcas (killer Whales) which got a mere 10 meters from the boat. F%$$##& amazing, the size of their dorsal, the whiteness underneath as one jumped out the water, simply spectacular.

What a privilege and awesome sight, I am told this is only the third time Killer Whales have been spotted in Mozambique.

Upon closer inspection we saw that they had killed a giant manta Ray, but the lack of blood suggested that they were not eating it but just playing with it. Strange behaviour indeed, one which we have seen before with Pilot Whales playing / eating on sailfish also outside the bazaruto Archipelago.

Seeing there were very young calf’s amongst the one theory that was put forward is that they are actually teaching the little one’s to feed by letting them play with the giant Manta???

Either way it was sight none of us on board will ever forget!!!

The excitement did not stop there for our team aboard Spanish Fly. We were fishing three lure/halfbeak combination on the riggers then 2 naked skipping halfbeak’s on circle hooks on the flat lines just behind both daisy chain teasers.

Just after 11am everything broke out in organized chaos as not one but two sailfish were competing for our port sailfish teaser. Even before Orlando managed to bring in the teaser I had already pulled one of the skipping half beaks closer in which was immediately and savagely attacked by a voracious sailfish. About three seconds into the drop back I felt it had dropped the bait. I thumbed the spool and waited as the bait cleared the surface, now much further from the boat. Within seconds the fish come again and this time after a 6 second drop back it come tight as I slowly pulled the drag up to strike. As the fish started jumping towards the horizon. On board everyone promptly pulled the other lines in, and another sailfish followed the other skipping halfbeak right up to the prop wash, with lighting reflexes Morgan jumped and fed the fish a few meters from the stern.

Besides being so much more effective on the hook-up department – the visual excitement of teasing sailfish and then dropping baits on circles for the switch is hard to match and everyone on board was screaming with excitement as the fish propelled out the water a few meters off the boat when it come tight.

After all the initial chaos, everything came under control as both fish sped off in different directions.
Within 20 minutes we had the first fish, estimated at about 32 kg. As the fish was pretty lively and seeing it was the angler’s first billfish we briefly took it out the water for a quick photograph. After ensuring the fish was in good condition we let it go.

Now we had to concentrate on Mike’s fish that was still 300 meters from the boat.
Another 15 minutes and we had it by the bill for our second release for the day, a fish we estimated at 35 kg +…….. we were finally on the scoreboard with 210 points. Out the cabin comes the Johnny Walker Black for some serious celebrations!

Going into the last day we were tied for first place on 210 points with Cool Runnings, but they had the lead on the last fish first rule.
The ocean was a stunning flat calm for the whole of Friday, a sunny, picturesque and beautiful day. Trillions of small baitfish covered the ocean surface all day long and as far as the eye could see there were schools of bonito and a bit deeper skipjack fervently feeding on them – it was all happening except that the sailfish were not interested in our baits.
It was hard fishing but at least in perfect weather and there were still some fish around to keep things interesting and the guys on their toes. Realistically anyone could still win the comp – a triple sailfish hookup is not at all uncommon of this area!
First up was Shakina who after dropping one finally come tight on their second sailfish of the comp and shortly after 9 am released it.
This was just getting better – there were now 3 boats tied in first place!!!