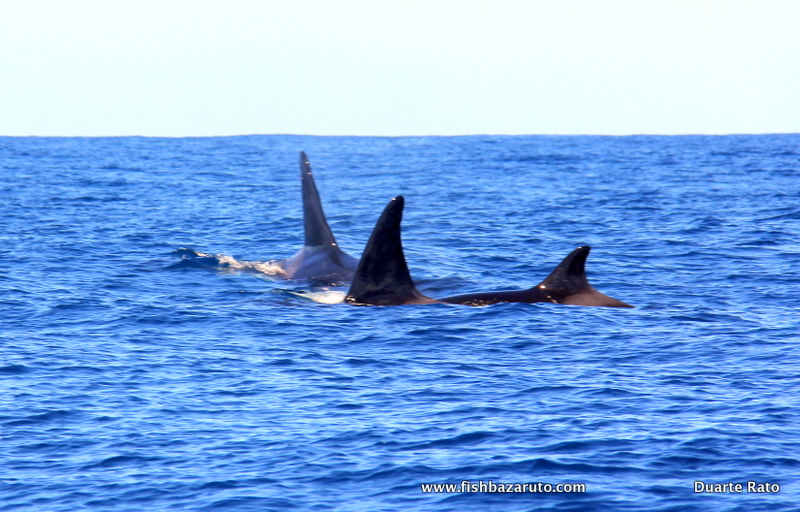 Between the winter months of June to September the Bazaruto Archipelago is not only blessed with usual flat calm seas, blue water and excellent fishing but we are visited by the gentlest giants in amazing numbers and with the guaranteed sighting of humpback whales there are also the chances to see Orcas.

And a baby Orca!

Although a rare occurrence, in the last few years there has been a good number of Orca sightings in the Bazaruto Archipelago, mostly in the peak of our winter. Most are of somehow large pods with calf’s and we have had the privilege of seeing them hunting a manta ray and then teaching their young. One after the other would come in, take the dying, bleeding manta from the surface pull it down a few meters, shake it and then let go. After which the next one would come and do the same.

Normally arriving at the end of May to early June and stretching all the way to October, each year there seems to be more and more whales coming through the Archipelago. From late June to September it is a guaranteed sighting and normally you would see dozens in a single trip. They are normally swimming north when they first appear and then from August every single one will be swimming south, back to Antarctica with new born calf´s.

The Humpback whale (megaptera novaeangliae) is one of the most active whales and therefore one of the most sought after to watch seeing they are known for regularly breach out the water as well as other surface behavior such as spy hopping, tail slapping, and slapping their large dorsal fins that can attain a staggering 4 meters of length.

Its ‘a blessing to have those giant´s visit us during the winter and we see them every day during our fishing charters or whale watching tours. Apart from the Humpbacks and the chance to see a pod of Orcas, Bazaruto as exceptional surface activity and humpback, common, bottlenose and huge pods of Spinner dolphins are regularly seen. Pilot whales and whale sharks can be also seen and almost on a daily basis one see´s turtles lying on the surface, including the massive leatherback.

And, you might even be lucky enough to spot a dugong, which occur in the sheltered bay between the Islands and the mainland, grazing on the seagrass meadows. The Bazaruto Archipelago supports the largest population on Africa’s east coast.

Below some amazing footage from http://www.viladoparaiso.com

…where our fishing guests regularly stay in Vilankulos and fish from the 38ft SuperCat Sportfisher “Game Changer“.

Check out our whale watching activities on offer from FishBazaruto, by clicking here.