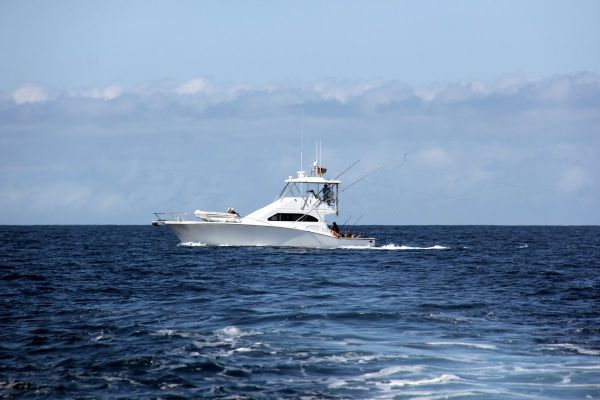 I spoke to Kevin on BIG BOB and we decided to go to Plan B which was to go out wide and fish that 500 meter mark out of sailfish bay that as been so productive for us.

The water was definitely better out wide but even at 450m it was not what it is suppose to be. We pressed on further out and finally at the 550 meter mark started seeing some electric blue water and a couple of frigate´s flying above us!

11h30 on the dot and I see this neon blue right underneath our long corner tube.

Everyone looked astern as this beast just lounged itself all over the lure and we in for the races! This fish was one of the fastest fish I have ever experienced and in no time we were on the backing.

I had borrowed a deckie, which had limited experience in Marlin fishing, and he took ages to clear the one side so that I could turn and chase. By the time he did so we had 700 meters of line out of the #130 and I had told Carl to come down to 12 pounds of drag. I started racing ahead just as the fish started jumping. Even from this far it was clear this was a proper one easily looking 700.

All of a sudden we lost contact…..everyone just silently stared in disbelief!

Well you can´t catch every single one.

I radioed BIG BOB who was about 2 miles to the NW of us and they also had also hooked up to a double header of sailfish, which they released!

One thought on “Big fish…short left!”