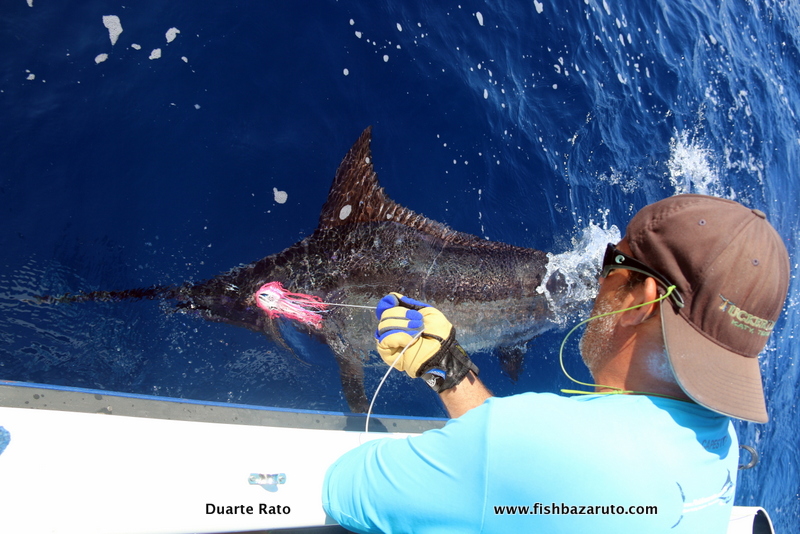 Blue Marlin and all sorts in April 2018

Blue marlin and all sorts in April: It’s been insanely busy and thus the lack of reports so here is a quick overview of whats been happening our way the last month or so!

As per our last report we had a remarkable trip to Santa Maria in March where we got what might have potentially been Mozambique´s first ever Grander Blue Marlin. Unfortunately, we were not able to weight the tail wrapped fish caught by Carl Jankowitz, seeing there was no scale available.

Straight after we had Ian du Plessis and Dean Gouveia who experienced an amazing time in and out the water. Yeah, the pool competition on a couple of rainy days where fierce to say the least, with Marcelo coming up as the undisputed king of the table.

We will let the pics below do justice to those amazing days but suffice to say that in the last 8 Marlin fishing days we saw 30 Blues and on our best day we raised 10 fish, had 8 bites, 6 hookups’ and released 4 up to 600 pounds. This included an amazing triple Hookup on blues where we released two and pulled hook´s on the last fish 20 minutes into it. On this specific day, we also saw our good friend Luis Nunes, aboard Kambaku hooked up to a beast of a fish right next to us. Now, we all saw the fish jump quite close and to say it was a beast is a massive understatement. To me it looked bigger than the big fish we caught a couple weeks earlier and way up there. Luis, who was Skippering the boat and who has seen his share of big fish said it was the biggest fish his ever seen by far.

Capt. Duarte Rato on the leader with one of a triple Blue Marlin Hookup of which two where released and the third lost after 20 minutes.

Ian Du Plessis with four Blue Marlin Flags aboard FOURPLAY. On this specific day we raised 10 Blues, had 8 bites, 6 hookups’ and released 4 to 600 pounds.

Image 6527 – Ian Du Plessis with four Blue Marlin Flags aboard FOURPLAY. On this specific day we raised 10 Blues, had 8 bites, 6 hookups’ and released 4 to 600 pounds.

Image 6467 – Capt. Duarte Rato on the leader with one of a triple Blue Marlin Hookup of which two were released and the third lost after 20 minutes.

Well it certainly seems there are a few Blues around Africa´s southern East coast this year and as is well know now, on April´s fool day, Richard Bay first ever Grander and South Africa´s third grander (all Blues) was caught at 1 066 lbs. This fish was caught aboard ROUGH RIDER with Capt. Jacques van Wyk, Marius Botha and Michael Fourier. Congrats boys…

Back at Bazaruto it’s been pretty EPIC as well even though the water at 28c being way to warm for this time of year. The game fishing action was pretty fast from late March to the beginning of April. Loads of Yellowfin where the staple but early numbers of sailfish have also started to show and a number of small Blacks in the 50 to 120 kilos released. We also had two groups at Bazaruto over this time doing some popping and they had some excellent action on GT´s, especially a couple of insane sessions by the GAP on two consecutive mornings aboard VAMIZI.

Then at the end of the second week of April this very unseasonal even warmer green water moved in and it went real slow for about 5 days. At that stage, out good friend Dave Tucker from Houston and John Hobart from Fort Lauderdale, come in for a visit and fish with us from Vilankulos aboard GAME CHANGER. It was disappointing to find extremely warm and green water all the way up to 600 meters. After a slow day, we decided to try some day time deep dropping to try for a swordfish. As far as I know it was the first time anyone had tried it off Bazaruto and it was interesting to see and learn from John, who is a Jedi at it!

On our first drop we hooked up after about 20 mins and the excitement levels on the boat where right up there. Disappointingly, it turned out to be a Escolar Oil fish, which was absolutely delicious on the barbecue right on the boat half an hour later. The next three times we went down we got bit pretty quick but never hooked up. By looking at the smoked and frayed leader John believes one was definitely a broadbill.

Even in that green pea soup water we had missed both a Black and a Blue when we trolled out wide (other days we just run). So, on their fourth day and seeing the water looked a tad better I was pretty keen to stay in and try and get Dave´s first ever Marlin (seeing John never made it to the boat that day)!

We started at the canyon and as we made our way south the water, even though it was nowhere flashy, started to improve. We live baited a small YFT for a couple of hours with no success and then I decided to put the lures and work a shallow area where a number of skipjack schools where feeding. As we set the second lure a Black come and try to inhale it three times but never found steel. Half an hour later we had a very aggressive fish come in and jump on the long corner lure and hook up straight away. Twenty minutes later Dave released his first ever Black Marlin. Not ten minutes later we again had another Black come up, this one very shy as it billed three lures out the rigger before fading away. We started making our way and still got to hookup and release another first for Dave, an Indo-pacific Sailfish.

Dave Tucker and John Hobart with a Escolar Oil Fish caught while day time deep dropping in 600 meters of Bazaruto while targeting Broadbill.

6555 – Dave Tucker and John Hobart with a Escolar Oil Fish caught while day time deep dropping in 600 meters of Bazaruto while targeting Broadbill.

That´s pretty much it, we have now had a 4 day blow from the south, a pretty rare low pressure system for this time of the year but very much welcome seeing it should have cleaned up the water and hopefully bring it down a couple degree´s.