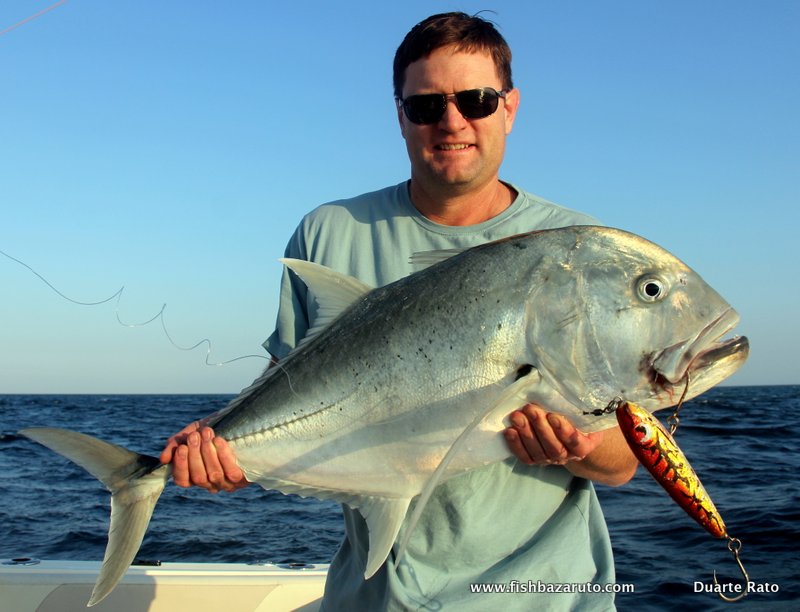 Just had our good friends Carl, Doug and Andrew come up for a Bazaruto long weekend and had lots of fun in and out the water. We fished on the 31ft Triton, Carl´s boat that we look after in the area. The guys stayed at the beautiful BahiaMar in Vilankulos a short run from the fishing grounds. We decided to head up north on our first day and got onto some tuna mid morning. Being the marlin aficionados we are we decided to live bait a small juicy YFT – maybe to much optimist to do during the peak of winter – but after all we have caught good marlin on all calendar months and within 30 minutes we had a take from a 400 plus pound Black. Unfortunately the circle never found the spot and after a big run the fish through the bait on it´s first jump. Disappointing but still nice to see a good size fish in the middle of winter. We had some fun on the ultra light spinning gear on the reef with Bluefin trevally, queenfish and lots of gar fish in the afternoon and Carl released a mid size GT on the always-reliable Bobara 100 just before sunset!

On our second day we started with a light spinning session and then decided to go out wide to the 500 meter mark just of the magaruque canyon. Last year we had some remarkable fishing out wide for Blue Marlin and big YFT up to 72kg in July and early August so always cool to have a look. But, things were slow out there and after 4 hours we decided to head closer in to the reefs edge and work a few pinnacles. Well, on the first pass over the pinnacle where terns and frigate birds hovered over we hooked but lost a good size 15kg + cuda right by the boat. On the second pass three rods started to scream and with wahoo. After that it was just madness. We decided to just fish 4 plugs on wire (rapala´s & Halco´s) and every time we went past the pinnacle two, three or all four rods would start screaming! At a stage we even had a triple sailfish strike but obviously using the plugs they do not stick so well and we did not hook-up on a single fish. But the wahoo ( all around 14 to 18 kg) fishing was surreal and after a hour and a half of madness it was a pity to have to leave while the action was still red hot! But, we had to meet some mates for a fish braai and drinks at the sanctuary, which lasted well into the night!

Great couple of days in very good company….thanks for the good time guy´s & see you soon!!!!