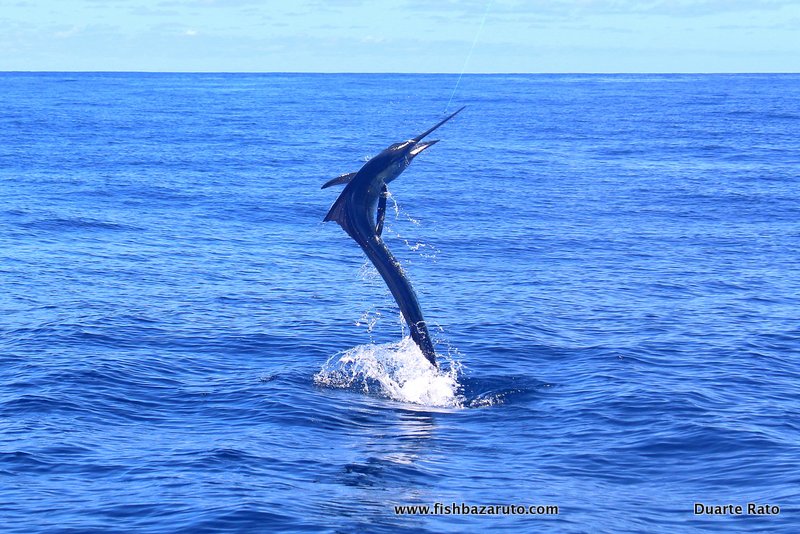 When the water starts to cool down by the end of April to early May and with our, rather warm winter approaching, we start seeing an exponential increase in the numbers of sailfish on the waters around the Bazaruto Archipelago. Truth be said that, in what we believe is a cyclical anomaly, for the last few years these gracious light tackle speedster’s have not been present in the ludicrous high numbers we got used to, when raising daily double digits was the norm and over 30 a day was pretty frequent!

However, they still here in fun numbers every year and when conditions were good this past month and a half, they provided excellent entertainment. While I was away in May the few boats fishing reported some exciting days with good game fish, especially nice size yellowfin and wahoo to compliment the sailfish action. Sailfish here normally average between 30-40 kilos but my friend Jayson reported releasing a beast in excess of 50 kilos. They are caught year round but their best season normally starts late April all the way to September.

As we got back in late May and into early June we did a few days out there and literally raised sailfish in every single outing. In some instances and because we were not specifically targeting them with circle hooks the hook-up ratio was not great and sometimes appalling, but in the few days that guests wanted to exclusively target them the conversion was obviously much better.

Below a few random pictures of these outings.  You will see a Black Marlin caught by Pieter Du Plessis – his first ever and a great catch on light spinning gear on the 3rd of June. That bite come about 10 minutes after setting the spread in the morning. As we approached a huge school of jube jube´s (small bonito´s) we had a bite on the circle rigged swim ballyhoo and three other bites on the long´s with the J´s. Fortunately we only hooked one of the three yellowfin as a Black Marlin started jumping on our stern connect to the light spinning gear. What great fun chasing that fish which, providentially for us put on an excellent performance doing a number of jumping sessions and within 30 minutes or so we had it right by the boat for the release. We also caught a few gamefish that morning and two hours later had three sailfish come up on the baits simultaneously, missing two on the long lure/ballyhoo combo with the J hooks but Eugene released one on the swim circle hook ballyhoo / light spinning gear outfit.

Then, on the second week of June we had the annual BB Sailfish and game fish tournament held out of Vilankulos. This is a small but extremely fun 5 days of fishing with excellent camaraderie. Winter time on the Bazaruto Archipelago is know for it´s beautiful clear flat calm days, which was the norm the previous two weeks. Unfortunately the weather Gods had different plans for us and the forecast was not looking great for the event. The first day was a blowout and we had to endure some breeze and sometimes wet conditions for the next three days. We were lucky to get the first sailfish of the event very early on the first day and never left the lead right up to the last hour on the last day.

On the third day of the comp the water started to change and when boats got out there on the fourth & last day (which was finally flat calm) they found really green looking water and very little activity and turned out to be a slow day for most…but not all! Game Changer (who on the second day had fought an estimated 400 pound Black Marlin on the light sailfish gear just to have it part the leader after more than a 3 hour fight) disappeared from the rest of the crowd! They traveled way up north  where they found a good patch of water. They caught a sailfish early afternoon but we still had a one fish lead and the way it was going it seems improbable to loose that! How wrong where we – with 45 minutes to lines out they hooked a double header for an absolutely brilliant last minute win.

We got second place, best individual sailfish angler for Mike Gooch and biggest dorado of the tournament for Andrew Walker. Despite the weather and adverse conditions it was a great week and surely everyone will be back next year.

Now we are getting the heavy tackle ready and out seeing this week we will be fishing everyday leading to the 4th of July Blue Marlin World Cup. Due to unforeseen circumstances our angler from Germany, Lothar Sobek who had already booked a year in advance, had to recently cancel fishing the World Cup. However we quickly had Charles Holsted jump into the opportunity and hopefully we will have some good fun fishing out wide in the next few days and more importantly hook-up to a proper one on the day!

Wish us luck, until next time tight lines and happy tides!

2 thoughts on “BAZARUTO WINTER SAILFISH AND much more…”