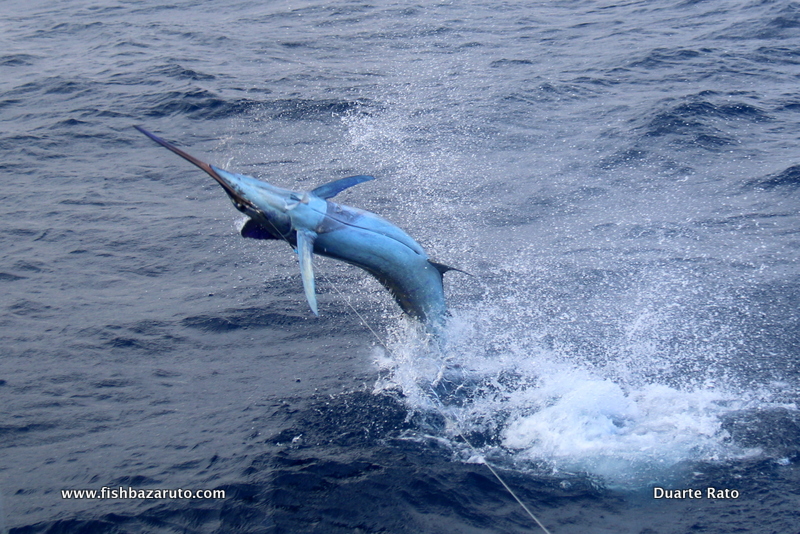 This was not at Bazaruto, but when someone gets a 1000lbs Marlin on New Year’s Day it´s something special and worth reporting.

As is usual in Bazaruto, January as been a pretty chilled month for us with a few tourist game fish charters here and there but nothing much to report. There´s been loads of small to medium size Yellowfin Tuna out there, jellybeans for Marlin. It´s unfortunate that not many boats have been targeting them seeing at an ideal and low water temperature for this time (26c), deep blue and lots of good bait they certainly around. There has been a few small to mid-range Blacks caught and fish up to 700 pound lost, but again no one really targeting them. The weather has also been pretty unreliable with constant wind, mainly from the SE, but when boats have ventured out there has also been good reports on the GT fishing along with many other species on the popper and jigging.

Further down south at Inhaca it´s heating up for a great season with a few Blacks, a good number of Blues and loads of Striped Marlin (many double and triple headers) being reported since late December. Just yesterday we received a report that over the last 3 days (1 full and 2 half days) Number One went 1 for 4 on Black Marlin and 5 for 10 on Striped Marlin. A few days before, on the 11th January they also went out for a half day and went 1 for 1 on Striped and 1 for 1 on Blue Marlin with a fish just shy of 500 pounds.

But, back to the amazing 1000lbs marlin caught on new year´s day…

This catch was made by Capt. Eddy Lawler and the 1 089-pound fish made history as being the first ever Blue Marlin weighted in Australia.

The fish was caught off Exmouth, in Western Australia.

Another startling thing on this catch was that it  was caught on the pitch. They first marked the fish on the sounder and sure enough she come up and crashed the Violater from Bonze lures. She smoked the skipjack pitch bait – angler Clay Hilbert gave her on the #130 tackle. They got the leader after 40 minutes but could not hold her and it was another 3 hours until they could get the leader again.

Now, with so many Granders caught, it was quite startling the absolute hysterical way this fish was `attacked“ by some greenies, three huggers and supposedly conservation and environmental groups.

One that I really found ludicrous was Blue Planet Society https://web.facebook.com/BluePlanetSoc/, coming on their FB page attacking this catch after an article by ABC news http://www.abc.net.au/news/2018-01-04/blue-marlin-exmouth-wa-game-fishing-grander-records/9303586

They produce wrong facts, then ask people to verbally attack the operation (Peak Sportfishing) website and proceed to just talk the biggest bullshit…

Anyone who knows and has fished with us knows our approach and position in regards to the killing of billfish and that we mostly refrain from commenting on it on Social media, but these puppets just went a little too far so this is what we wrote to them… clowns!

Anyone that as lived in or by the sea and admired its wonder on a daily basis in this day and age can see what is happening. If one has done so for more than twenty years in any specific place, even remote as where I live, one can see the pervasive obliteration that´s going on in our Oceans.

We are the beast that eats its future and the future of its children and the evidence has been building for decades. It is shocking and grave and even dangerous and that is why when hysterical tree huggers want to make the dead of a single Marlin into something which is not it is wrong and stupid and ridiculous. If you want to make a big thing about a few thousand (if that) billfish that are killed from Sportfishing every year it is still wrong and stupid. If you coming from an ecological point of view (as opposed to a moral one) then have the balls to tackle the real issue or go hug a tree and dig your face in the sand…

Everyone is entitled to an opinion, and I understand that some people can on a moral ground not understand Sportfishing. I try to refrain from answering stupid individual remarks on sport caught billfish on social media. It is just a waste of time. But, when it is an environmental group doing so, claiming false facts and in such a stupid way as to ask people to go into someone´s website and disgrace them it just so happens that I find it way over the top and find it difficult not to comment on their absolute ludicrousness.

If you want to do something useful get a pair of balls and go point fingers at the corrupt politicians, lobbyist, and all other rotten bullshit of the commercial fishing industry. Do something constructive and informative to reverse the apathy and ignorance hard working taxpayers have on it. If you want to do something, do that and give the general public a sense of what is happening and not throw sand in their eyes with all this bullshit and false claims…

You say; the media frequently cover sportfishing stories as if they’re some kind of achievement and then, in a way, you go and do exactly the same. That is the biggest tackle we have, so instead of the media and so-called environmentalists coming out with all this hype why don´t you waste your energy in tackling and putting out there the real issues.

Its only when people are educated on what is really happening in the Oceans that something will come out of it and this is no way to go about it.

You are attacking a Captain that as just won top tagging Captain in the Indian Ocean for Black and Blue Marlin, someone who has done more for research than all you clowns together. Do you know what would be of billfish research without -yes, Sportfishing Captains?

I might or might not even be against trophy and record hunting such as you but what a bunch of freaking bullshit.

You neither progressive, constructive or anything else that resembles it but rather pathetic with your false claims, go look yourselves in the mirror and see what you are, shame on you….

On a more progressive and positive note the Billfish Foundation as recently it´s 2017 Tag & Release Winners which you can see on the link below…congrats everyone!

We have a couple popping, jigging and light tackle game fish charters for the next month but nothing hectic. This is when we take a break and finalize everything for the year. Then, in March we heading down to Inhaca for some Blue Marlin fishing. Back to Bazaruto straight after where we pretty solidly booked for April and May and hopefully the Marlin bite will be as good as it was during the same time last year.

Then from mid-June to August we get that awesome time of the year with very calm seas and light tackle feast with our exceptional winter run of big wahoo, sailfish, yellowfin tuna and juvenile Black Marlin (and good Blues out wide). We still have loads of available dates from June to August, so contact us if you interested in light tackle game fishing…

Then, from September to December is our Heavy Tackle Season, we pretty solidly booked already but do have two slots still available (14-21 September & 27 November to 04 December). We are also most likely getting a second boat so more dates will become available in peak season.

Cool to have a Grander on New Year’s Day in 2018, hopefully a premonition for things to come…