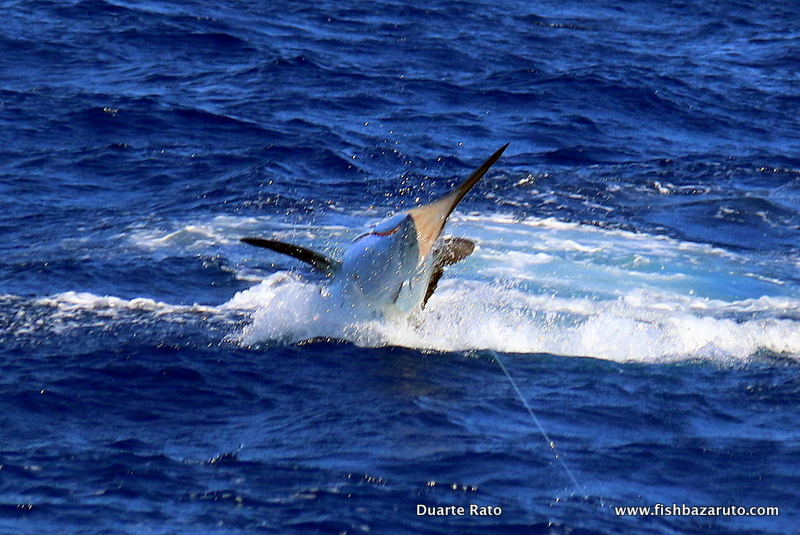 Catching marlin on bait with Captain Duarte Rato! FishBazaruto marlin fishing report for late October and early November is in! –  The Sardine News

Over to you Duarte…

It´s amazing that the last few fish were all on lures, well we could not catch much bait either, but now you get a bait you get an almost guaranteed a bite. Thus, catching Marlin on Bait.

After a good start but a slow early to mid-October, the bite is now on fire and absolutely mind-blowing.

Unfortunately, we have had a blowout today and thus I can write up a report of the last few days.

The last 5 ½ days have been world class and, in that time we raised a total of 21 Black Marlin and released 11 up to #700 pounds out of 16 bites! Well great numbers but those coming out of the Great Barrier Reef are just mind-blowing at the moment!

But back to Bazaruto and Riaz and Mohammed trip where Marlin on bait was on the menu!

We reported Wolfgang´s first trip here, where after a slow start they finished in grand style with a day we released 3 out of 5 up to 540 pounds.

The next day, the 28th October, we had Riaz Karodia and Mohammed Yassin on their first trip with us.

They have fished the archipelago many times. Riaz owns his own boat and frequently tow´s it up to fish these waters. Mostly popping & jigging. Their main interest on this trip was to learn this Marlin fishing story! To, then do it on their boat. Of course, if we caught a few along the way it would be an absolute bonus.

The night before their first day I got some reports from Maputo / Santa Maria where the bite seems to have started. Marcelo aboard FourPlay, the boat we charter out of Santa Maria won the 1 day local tournament on the 27th October with 3 out of 3 Blues. Another four boats also got one blue each. Still early in the season there but good to know and looking forward to fishing there again early next year. We will be doing that between mid-February to early April. Early this year was a blast. Great fun. Great numbers. And we got Mozambique´s first ever Grander Blue!

Anyway, Riaz and Mohammed´s first day started at II mile as we made our way south. Decided to do a tack into Sharkville to see if we could get some bait and on the first turn we picked two bonnies. Put them in the tube. Pull in the lures and run out. Put one on top and the other on the downrigger. Not 20 minutes have elapsed and we get a bite does not load up. Shark. As we pulling the half bonnie in the other bait snaps. We all thinking shark of course. But, one should always treat a bite as a fish and so we did.

As Lourenco comes up a 400 pound explodes.

Yeah…that´s what I am talking about.

It´s awesome when one hooks a fish within the first hour, of the first day of a new charter.

Mohammed jumps in the chair. The fish does not do much, not until it´s right by the boat. Then it digs it´s head. We have to push the drag up to subdue it. Christiaan on IBO is close by and comes to take a few pics from a different angle.

We work Sharkville a tad more with the lures and the start heading south to work the big C%$# place.

10h42 on the clock and BANG. Literally BANG, I just turn around as the rigger somehow breaks on a bite. Brand new,  month old riggers just completely break on the base insert. Now we got a rigger in the water, halyards all over the place and over the line, another three rods to pull in and a screaming 600-pounder at the end of the line! It´s pandemonium. Riaz is in the chair. The boys do an absolutely brilliant job to get the rigger, undo the halyards and bring them in. We start turning and chasing when she comes undone. Pretty disheartening, when you break a rigger you would at least want to catch the fish.

With one rigger, we make a plan on the spread and start making our way back. We still raise another one on the SR Ruckus but get no bite out of it and catch a bunch of small bonnies and a couple good dorado.

That day IBO raised three, got two bites and hooked one that come undone close to the boat, all small fish. Velerio raised three and missed one all on live bait and Quatro got a 200 pounder in the north.

The next day Riaz and Mohammend fished with Christiaan on IBO seeing we not only had to fix the rigger but also do a long overdue oil change. They had a very slow day and only one caught I heard of was 550 for Quatro.

Seeing they had a quiet day down south where we been getting all the action, we decided to have a look at Giant´s early morning on the tide change. Good call as there was a bite going on early morning. First Watamu released a small one next to us. Right after Aphrodite also hooked up on a small fish but on the light tackle. While they were fighting, it we picked and rigged a live skipjack. Worked south with the current and 20 minutes later hookup. Riaz jumps in the chair and does an absolutely brilliant job to bring his first ever Marlin for the release. We took a few pics and let her go at 500 pounds. Right after that Veleiro also hooks one up on a live bait and let´s it go at #300. They also caught another one about 300 on a lure and pulled on a 650 later that day on a bait. Shipface also got a small Black there late afternoon after having released a blue out wide.

The 31st of October was a mind-blowing day none of us will ever forget. Unlucky, as we should have done better, but awesome!

There was a NE breeze and we started looking for bait shallow and quickly got a bonnie and a YFT.

In the tubes run deep put them out and 12 minutes later get a bite. As we load up a #500 jumps and troughs the bait.

Back in for bait, lost two then had a bonnie that died.

Put the lures and within 10 minutes’ hookup on the Magnet by pulsator and release a 300 for Mohammed.

Ten minutes later catch a YFT run deep put it out and within 2 minutes have a #300 sniffing around. While it´s still there a much bigger fish looking to be 750 or better crashes the bait and we hook up. Or so we thought! She does some jumps but not much else and within 8 minutes she come up again and we are right on her when she opens that gargantuan mouth and spits the bait next to us.

About 45 mins later we get another big YFT. Put it out and work south with the current.  25 minutes later, not 100 meters from where we hooked the #500 yesterday we get a bite and hook up to a nice one. Riaz again does a brilliant job in the chair. This fish was no piece of cake and we had to push the drag up to sunset. Some fish are just very spirited. This was one of them, for sure! She pushed us all the way to 250 meters of water. 47 minutes of a great fight and we bring her for the tag using up to 70 pounds of drag. We let her go at 700.

Wind is now blowing and the current is screaming. We put the lures and it takes us just over an hour to get back to where we want to be. Against wind & current.

See some bird’s way out and pick a skipjack in 220 meters. Now got to slow troll it back to the zone.

Not really, within 8 minutes we get a bite in 186 meters and Mohammed makes short work of the very acrobatic #250 which we tag.

This is all before noon.

Its mind blowing, all you have to do is put a bait in the water and you get a bite. Simple. Insane!

But, we can´t get another bait so we put the lures and still raise a #300 that knocks the magnet and then the ruckus and just before heading in at 3h30 have a small 150 come on the xpress but no bite out of it.

The only other fish I heard for the day was Alladin´s releasing #250 on a lure.

After the slower times we had in early October, which has been on fire last few season, it feels real good to be catching them good.

Just hope they keep on snapping!