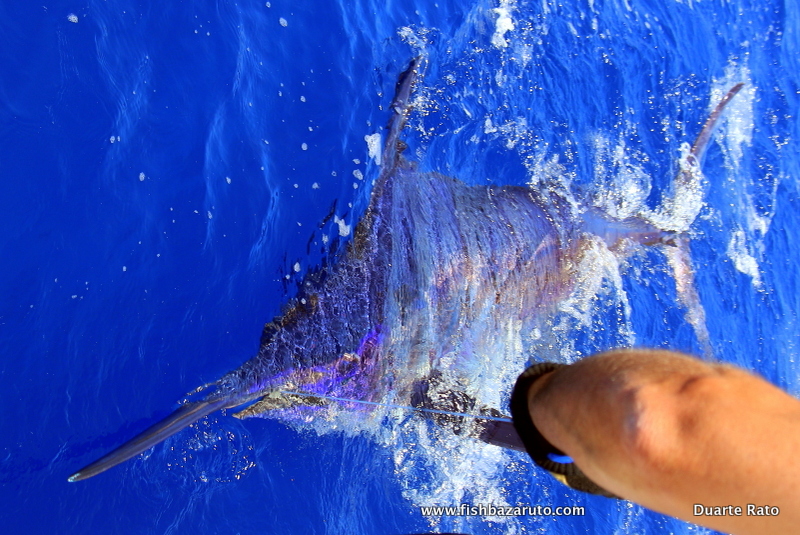 Catching your first marlin: by Doug and Ryan – We just ended our first group fishing for Blue Marlin in Santa Maria and although it was not fireworks, and actually the slowest we have experienced here this time of year, both anglers, Doug and Ryan managed to release their first Marlin.

After a great start to the Season, exceedingly warm waters (up to 30c when it should be around 26.5c) moved in late January all the way to a few weeks ago.

Obviously, everything went lethargic and fishing was hard & slow.

The week before we started three boats reported very tough conditions with only a small Blue and a Sailfish released for 9 fishing days.

Our first day greeted us with some beautiful weather which was a constant for the remaining of the week. We picked up a couple dorado on the lures and then, just before noon saw a Blue jump ahead of the boat. Minutes later it showed up behind our short corner lure, the riggler from Pulsator and we hooked up. But, only for a very brief period as the as the all eye ball come out.

Something which had never happen to me before. But, had happen to Marcelo just two weeks before!

Poor fish and poor Doug which, after having dreamt of catching a marlin all his life, lost his first Marlin ever in such a peculiar way.

We missed another Blue on the MM Ahi Pussy and caught one skipjack on the way back.

The second day was flat calm and was all quiet until 10am in the 450 mark it all went wild!

Nice fish looking over 500 on the long-left magnet, peels 50 yards and off. Seconds later a smaller one come on the long left Express, jumps but throws the hook. A minute later, the same or a similar size fish takes the same lure and finally we hook up.

Catching your first marlin with Captain Duarte Rato –  this time it stuck and Doug brought in his first Marlin ever at #250.

As it invariably happens most of the bites had been around the tide change and we made sure to be in the same area. Exactly on the tide and not 100 meters from the last bite the day before we get bitten by an insane fish.

She was fat and hungry.

Missed the Marlin Magnet completely on the first try.

Turn and miss it again, this time from the inside out.

But, she inhaled it on the third try and found steel.

Her first run was seriously insane.

We turned and chased.

She changes direction and we are almost caught out.

Ryan doing a great job on the chair on his first Marlin.

Inch by inch comes up and we finally get her alongside.

She´s still strong and the hook pulls on the leader.

Congrats all round on a very nice first Marlin for Ryan which was #500 and change.

Put the lures out and BANG…exactly an hour after hooking the first fish we hook another nice one.

Again, very close to the first fish and the one´s from yesterday!

Doug jumps in the chair and brings in a nice #400 pounder for a release.

Great day and both boys had said that if they each caught a fish the trip was made.

The next day we got a bite on the Black over Orange left short Phoebe from Bahama lures in 400 meters of water as we were still going out – no hookup!

Awesome crash bite but after that some serious green water moved in which went horrible in the afternoon so we made our way home early.

The boys from JoeLuLu persisted in the area and where rewarded with a 200-pound fish. Catching your first marlin!

On our last day, the water was still green right outside hell´s gates.

We decide to move north but that area north of Lighthouse is just too far.

Worked another two areas on way there but nada.

Once there we only had an hour and a half to work it.

On the way in, 370 meters of water, we hooked up, again on the magnet, but after some crazy jumps, pirouettes and upside down shit she come undone.

Moments later we raise one on the short corner Riggler which then moves to the Phoebe on the other side but never got a bite out of it.

Catching your first marlin with Captain Duarte Rato: All in all, on the 5 fishing days we raised 9 Blue Marlin for 8 bites, 5 hookups’ and 3 releases…plus one eye!

We still had another day but with difficult conditions and some wind stayed in and enjoyed a relaxing last day. Some light tackle spinning on the trevally´s and a great dinner at bemugis….

Up in Bazaruto the Tuna mayhem continues for over a month now with boats getting 15 to 30 plus fish a day. We had some loyal clients over the weekend fishing on Game Changer and despite the unusual rough weather they got 26 tunas in 4 fishing hours seeing some guys got seasick and they were back at the lodge by 10am on the first day. They got 26 but said they pulled another 10 or so and had 5 taxed…so absolute insane action!

We now getting it all ready to start with the next group in Santa Maria on Saturday….