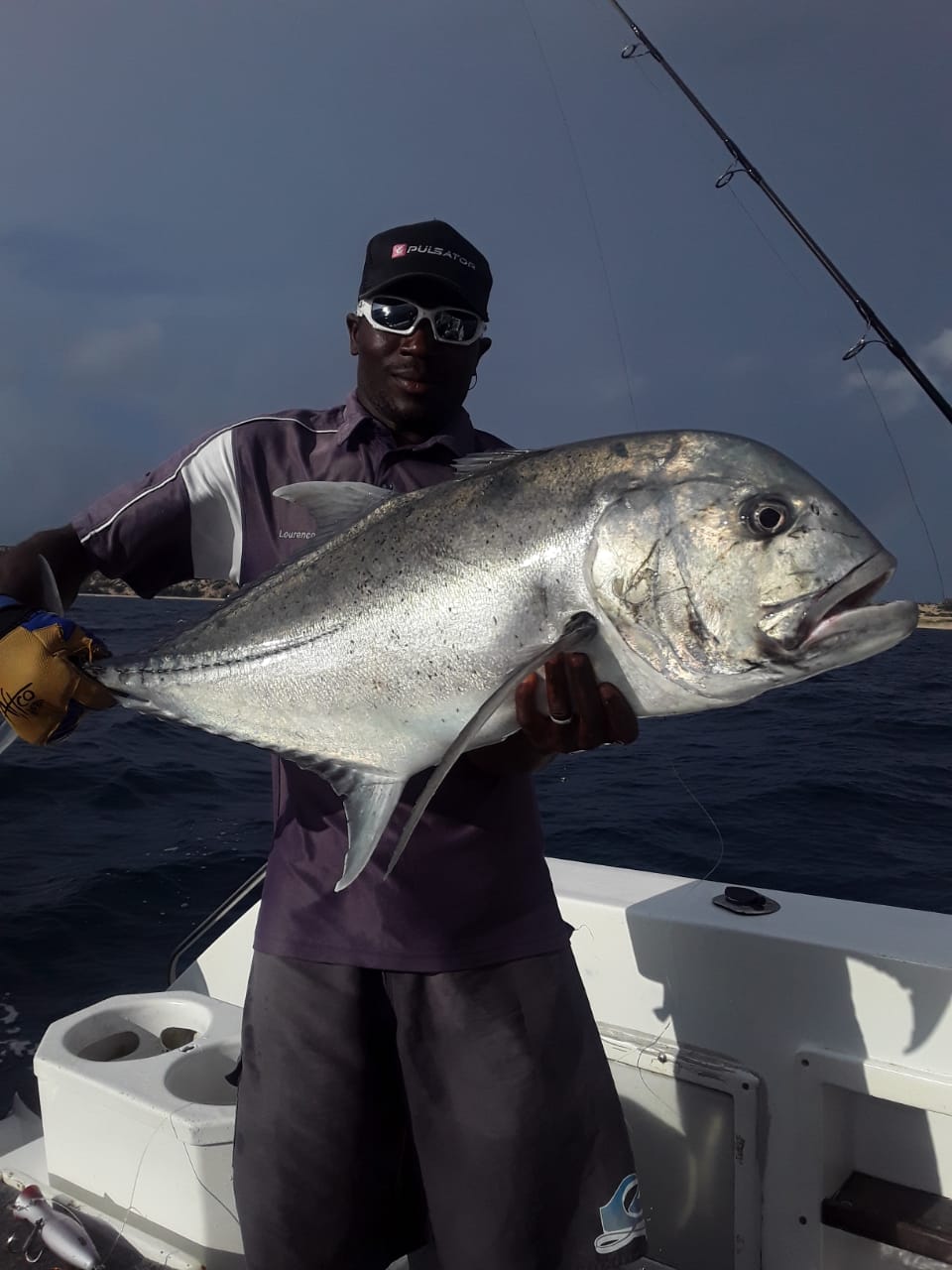 Early year in Vilankulos and the Bazaruto Archipelago – Mozambique means warm water (and this year it´s been exceedingly hot) and thus some lethargy on the surface species one´s target´s while trolling, but excellent GT´s popping and jigging, fly fishing, and spinning!

You can see more related posts on GT´s popping and jigging here;

This was the case when we had a couple groups in January both, from Bazaruto and Vilankulos. We did try and pull the lures for Marlin but, the few bites we had where lazy and all turned out to be very short encounters. Having said this, Charles Lee on Marlin had a great day fishing out wide and way north during this time catching a Grand Slam of a Blue, a Black and a Sailfish. A few days later Orlando on Veleiro went 2 for 2 on Black´s. You just never know here!

But, it was generally slow on the surface and besides a few good size YFT and a couple dorado and wahoo, the same was true for most of the species we normally catch as by catch and thus we, mostly focused on GT´s popping and jigging

We had some serious epic jigging sessions albeit some being frustrating in the sense that either the tackle being used was to light for some of the brutes we hooked and that proceeded to break us off on the reef or we had the taxman come in after a while, spoiling all the fun. But, one can’t really complain when one releases over 12 to 15 species in a day, during many days, including some very decent fish.

GT popper fishing was also, at times phenomenal, and despite there not been any monster’s the numbers and action made up for it.

On top of exceedingly warm water, in between flat calm days, we also had to deal with some pretty messed up weather including cyclone Eloise, that despite having turned north of us at the last minute, still produced some pretty heavy winds and thus unfavorable fishing conditions for some time.

But, they say pictures speak better than words so, here is a fishing report roundup from Vilankulos, Inhassoro and the Bazaruto Archipelago for the first 6 weeks of the year…

After having to postpone their Marlin trip in November, Theo Boendes did an early year trip to Bazaruto aboard Vamizi, targeting a variety of species on jigging, spinning, popping and drop shot. As they were to learn the hard way, the tackle they brought along for GT´s popping and jigging was not always up to the task and meaning more reefed and taxed fish than we hoped for…

As the water temperature starts going down we should see the start of better surface fishing out of Vilankulos and Bazaruto, with many YFT and from mid-March to May our second run of Black Marlin. Blue Marlin also have a good run from then and into winter and we should start seeing good numbers of Sailfish from around the same time that wahoo make their crazy yearly run from May. GT´s popping and jigging, which can be had year-round, should be excellent until the water drops to winter temperatures around the end of May.

Hopefully things will get better outside the water and travel open for within the next couple of months.