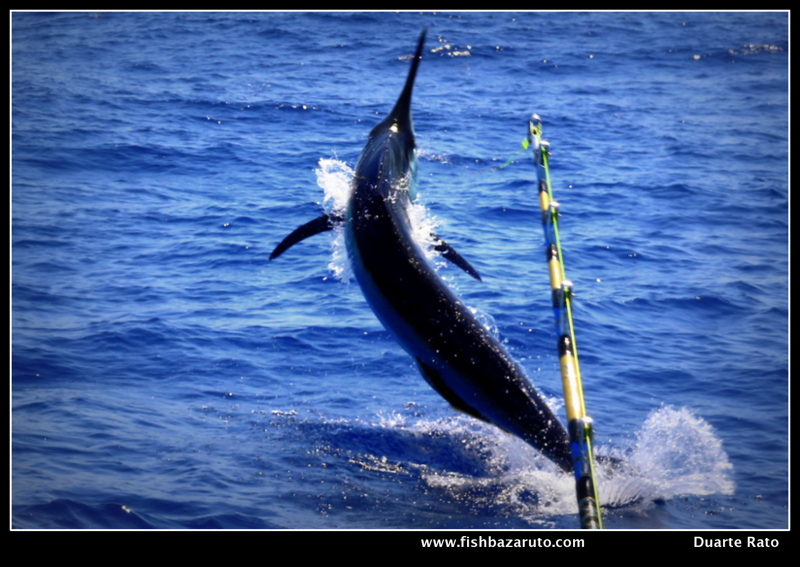 This last week we spend a few days running Warren´s Chapman beautiful 930 Butt Cat, Strenue and had a blast, catching Warren first Blue and biggest Black Marlin to date. With a few other good fish in between.

We had two half days, one before and, the other at the end. On the three days we fully concentrated on Marlin fishing produced 3 Marlin from 6 strikes.

Warren had been fishing for a few days, already going 1 for 4 on a #350 Black down south, when he phoned me and asked if I would like to join him and run the boat for his last few days.

Along with local deckhands Justino and Charlie, they picked me up mid-morning on the 24th of October and we spent the half day bait fishing and then baited a few live skipjack out of Sailfish Bay, which were taxed.

We finished the day looking for bait again, not much around, but it was a great end to our first half day as Warren hooked, and then brought his personal best GT – on a light bait rod.

The next day we headed north to Bazaruto´s lighthouse reef. Once again, quennies where scarce in the shallows but bigger bait, especially YFT and bonnies where plentiful deeper, outside Aladdin’s. But, so was the taxman once again and, after one too many baits taxed it was time for another plan.

With no swim baits to fish the dead baits, Warren was really keen when I suggested we go out wide to look for a Blue.

We set the lures and headed out to this new area we discovered a couple years ago, between 300 and 340 meters. Its less than half way to our normal Blue fishing grounds and, can’t remember working there, last season, without having a bite.

We arrive in the area 30 minutes later and immediately found a log with loads of dorado, wahoo and YFT. Worked the area, catching a few of those for the pot. And, then, and with so much action in the area, the inevitable had to happen.

A Blue Marlin crash strike the long left on the only #50 we had out.

It went seriously ape-shit after the strike, insanely jumping towards the boat. But, with none of the supersonic speed bursts Blues are known for, and on which they invariably burn themselves out, it gave a really good tussle. But, within less than twenty minutes Warren had released his first Blue which we called at 400 pounds.

We moved in shallower looking for a Black with the afternoon tide and had a fish looking about #200 on the long left Express again! It knocked it out the rigger three times without finding steel. We put out two skip baits for the last two hours but besides a couple small fish on the bait rods, did not see anything else.

On the 26th we left bazaruto and started heading south as we would sleep at Warren beautiful spot at Linene for the next couple of days.

Early morning saw us looking for quennies again. Like the previous two days the tide was not correct and they were scarce.  However, we finally (alleluia!!!) caught a small and a big one. In the process, we also caught a bunch of trevally species and a couple bonnies.

At long last we had some good baits!!!

The plan was to work the northern edge of the canyon until the change of the tide just before noon. But, it looked dead there and after 2 hours we decided to put the lures and head further south with the current and get the tide change at Linene.

We got a couple game fish while working the lures.

About two hours before the tide, we switched to the dead baits, with a bonnie on the skip and the small quennie on the swim.

Half an hour after the tide, I was chatting to Warren, when out of the corner of my eye I see a big hole and a seriously big light blue water tube behind the skip bait. She come again for a mesmerizing, shoulders out the water kind of bite and, we hooked up.

As the bigger fish commonly do, she did not do much and we put the heat from the beginning and got on top of her immediately. Then she woke up and gave us some great jumps by the boat. We got the leader within 6 or so minutes, but had to drop it.

She dug deep and not one to be shy on the drag, after telling Warren to put a tad more, I look back to see his gone straight to sunset on the #130. After another ten minutes or so we had some more wild jumps and then, the green fish alongside for a release. At 700, or just north of it, that was Warren´s biggest Black to date and surely a great wild fish to remember.

About an hour later we got a bite on the swim bait and as we come tight a fish around #250 jumps and trough’s the bait. As we pulled it in we saw that the circle had hooked into the bait on the strike…no way you gone´ find the corner on that one…tough luck!

We put the lures for the last hour, got a couple wahoo for some delicious carpaccio that night, and raised another Black, this one on the long right Magnet but, got no bite out of it.

The beauty of fishing out of Warren´s house is, among others, how close one is to the fishing grounds. On our third day, and literally within 10-12 minutes after leaving the house, and while we still putting the longs out, not having them even clipped on the rigger, we got a bite. The #500 pound looking fish took the Pulsator Magnet and immediately rocketed out the water. Unfortunately, it was a very brief encounter on what could have been, an extremely auspicious start to the day.

About an hour later, Veleiro, looking for bait just to the inside of us hooked, what they said was a very big Black, in 31 meters of water, on a rapala on the bait rods.

It broke the thin wire on the first jump.

We worked the lures and got a couple gamefish but, as we got closer to the tide change we, once again, swooped and put a skip rainbow runner and the large queenfish (that had Marlin written all over it) out.

Most of the fish had been shallow and within the last hour of the incoming tide pockets of skipjack started to show in between 45 and 60 meters of water. Around the tide change, and while working one of those schools in 50 meters of water in front of n.3, we get a bite on that gorgeous swim bait and the circle finds the sweet spot.

This was one of those real fun fish that just stayed up top and in the air for the short time it took us to get it by the boat. A real show fish and some great pics on it.

The next day we still fished for a couple hours before heading back to Vilankulos, missing a sailfish on the lure but, with no bait left or showing and the Beast from the East blowing it was slow.

Great three days in the water that saw us raise 7 fish, with 6 bites and 3 releases for Warren´s first Blue and biggest Black…

Happy days and really cool that our last 4 fish have been on a live bait, a lure, a skip bait and a swim bait…. shows how diverse, challenging and cool fishing the Archipelago is!

Just so good to be out there!

Thanks for the good times Warren and hope you (and we) catch them up from the 12th.