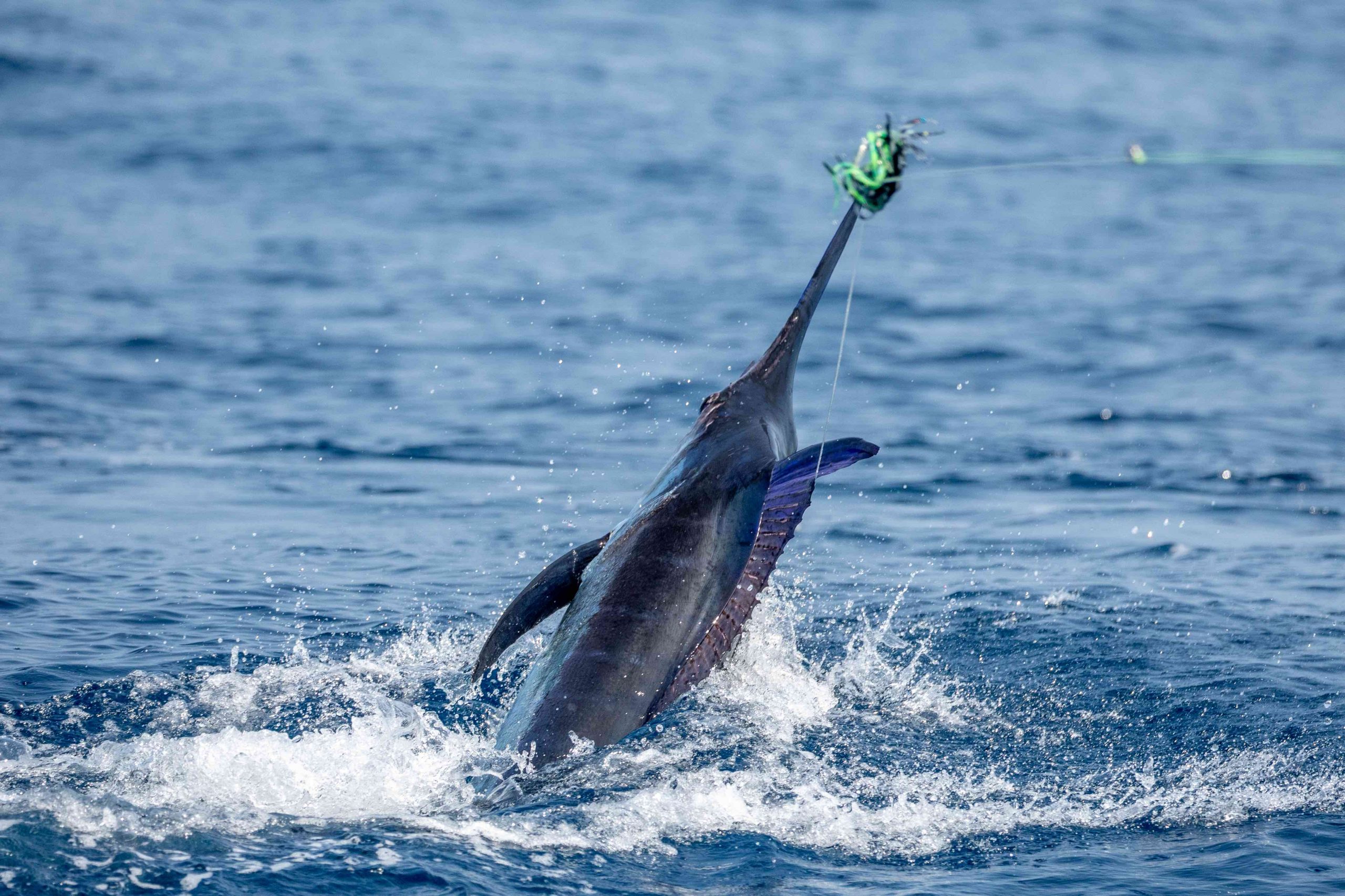 Our second boat IBO which is run by Christiaan Kruger during the Bazaruto Marlin Season had an amazing day last week when they got a Bazaruto Grand Slam. Actually, they got even better than that going 5 for 5, releasing 3 Blue Marlin, 1 Striped Marlin and 1 Black Marlin

Here’s the story as told by Christiaan…

After a generally slow day, although we got a Black Marlin, we decided to go out wide the next day to go look for a Blue Marlin for Charles.

Out wide in search for Blues…

The day started off slow as we pulled some baits in the shallows with no luck, we changed it up, put the lures out and headed straight out to the deep, just out of the Black marlin grounds we started seeing a lot of flying fish from the 200m mark up to about 400m.

As we got to the Blue marlin spots out in the deep it wasn’t looking too fishy, we did a few turns around there seeing no life, we decided to go north and shallower as we saw more bait in the shallower water.

As we got closer to the next area, we wanted to fish. We marked a fish on the sounder and it was sitting 35m under us. As we looked up, we saw a swirl on the right long (Andy Moyes medium Plunger) and the fish came back and smoked it.

Charles got in the chair, we cleared the other rods and released and in no time at all released Charles first Bazaruto Blue Marlin at about 150lbs.

Lines back in the water we decided to hang around that area for a little bit longer, with no luck we proceeded to the northern area where we wanted to go fish.

30 min later on arrival to the northern area we had another small fish bite the Pulsator Marlin Magnet. Got Charles back in the chair and he made a quick job out of the 200lbs Blue Marlin.

Quick congratulations on fish 2 and we had the lines out again, as we sat down it was not 10 min and we had a beautiful crash bite on the short rigger (Andy Moyes Large J-Boy). Charles got back in the chair and we started boxing the 300lb wild Blue Marlin.

The fish was a real fun fish, jumping all over the show and all on the surface, and we got some great shots of the fish. Quick tag and photos and we let him swim free again.

It was like déjà vu, congratulations, sit down, have a sip of water and we see a fish behind Andy Moyes’ large J-boy again. This fish was a bit fussier on having a bite, but eventually we went tight, Charles back in the hot seat for the 3rd time in an hour. As Fernando grabbed the leader the fish did some amazing boat side jumps and we saw it was a Striped Marlin. Quick picture and the fish swam strong.

There is a saying “never leave fish to find fish ”, but this is a different story, with having 3 blues for the day and a stripey I told Charles lets go in and catch a Black quickly, to get a Grand slam!

With an hour left of the day we just got to the Black Marlin grounds again, luck would have it first tack in the area, 66m of water, we saw a shape behind the Pulsator Marlin Magnet. It is a Black for sure I told Charles, the fished missed the lure on the first attempt and absolutely smoked the lure on the second.

Charles got back in the chair and 20 min later the fish was boat side. Tagged and released, everyone looked at each other and just started smiling as we just caught a Grand slam!

Incredible day out on the water.

And now in VIDEO! With a marlin ID challenge included…

Video, post and SEO by The Sardine News for FishBazaruto.