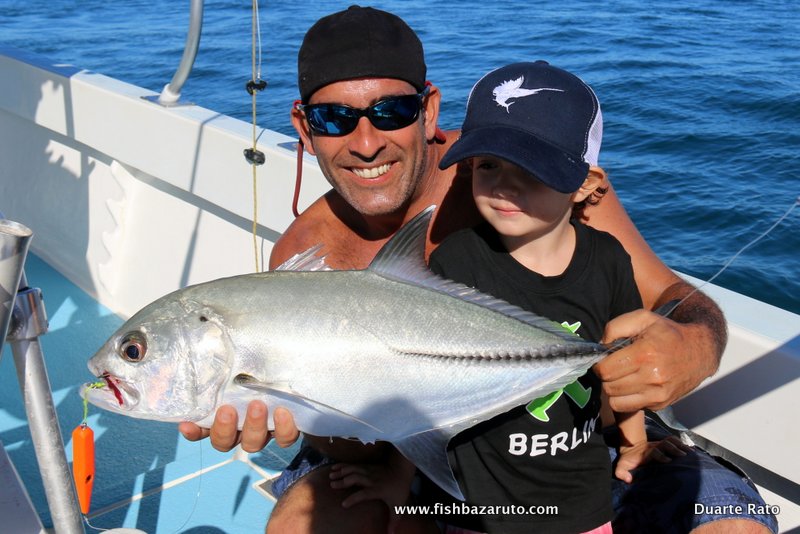 Sorry for the lack of reports but I was away for three weeks in May so no fishing during that period. We come back right at the end of May and the guys told me the sailfish had moved in in fairly decent num

bers along with some nice size Yellowfin tuna and wahoo. The light tackle brigade where doing extremely well as well.

The first week and a half we did a good number of light tackle (mostly spinning) days and had great action & fun on the kingfish (trevally) including yellowspot, big eye, brassy, greenspot, black fin and small GT´s (although we did loose a couple of bigger fish that where just to powerful for the tackle being used.

But there was also some days with good action on the queen mackerel (natal snoek) although unfortunately they have not showed up in the numbers they did the last two winter´s! Other species we caught were king mackerel (cuda), talang queenfish, needle scale queen fish, rainbow runner´s, great barracuda, pickhandle barracuda and garfish.

But the best afternoon was (for me obviously) taking little Duarte on his first fishing boat trip. The boy had caught some tilapia before but this time it was on the boat and the excitement was right up there! We could not have asked for a better day with absolutely flat calm seas, great visibility…. absolutely gorgeous day!

We started the afternoon fishing the yo-zuris with the little rods to catch carapau and some other small critters…it was not fast going as usual due to the big and low tide but still great fun and Eugene was chucking a popper and lost a really nice kingfish!

We then went outside Magaruque looking for the snoek but they where nowhere to be seen. Back to the reef but the tide half way and the current screaming thus we had about an hour of very little success. But out persistence paid off and an hour before the tide they really come wild on the bite.

It was absolute mayhem and even tough they where small they where the perfect size for the light tackle we were using and excitement levels where right up there…between Mummy and Junior I don´t know who was more excited. Every time we drifted past the spot one would have three, four and more fish chasing the poppers and it was double or triple hook-up every time. Gretha got a bunch and little Duarte (we Dad´s help caught one) and he just wanted to put his gloves on and leader the other one´s! I caught a few and so did Peter and Eugene!

It only lasted for an hour and a half or so but it was absolute fun!