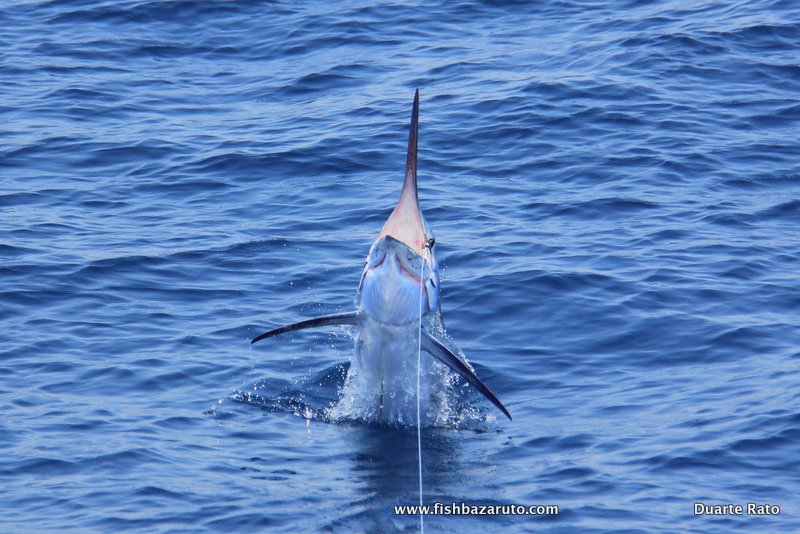 Our Bazaruto Fishing Season as just come to an end and although it did slow down a tad our last charter was a blast with a mix between popping, jigging and Marlin Fishing.

Craig Henkel has been a regular client of ours for years. Good mate and excellent fisherman who owns his own boat in SA and regularly fishes Inhaca, Baz and many other spots in SA. They are superb fisherman all round but specialists with the big drop-shoots.

Blast from the past!!!

We´ve had some serious radical sessions in the past!

I remember one a few years ago, late afternoon, off Sharville.

Showings where top to bottom.

Solid red all the way.

Every down was a screamer!

Got over 12 different species and dozens of insane fish.

Then there was another fishing season we had them at the end as well.

Up north. Insane. Got smashed up by loads of huge GT´s.

Released a few to lick our wounds.

Back to the drawing board.

Still today, Craig reckons his never been humiliated by fish as on that one occasion…

That´s what keeps you coming back for sure!

Being Humbled by some unstoppable fish!!!!

This time we had them for three days at the beginning of December.

Our last charter of the Bazaruto Heavy Tackle Fishing Season.

Back to back for three months.

Along with Craig come his son Christopher, on his first ever Bazaruto trip and friend Ryan and his Dad.

…and hopefully have a few good popping and jigging sessions along the way!

The sea was still a maelstrom on our first day. The hangover from the previous day´s blow.

It was heavy going with everyone except Craig suffering from mer malade!!!

We got a beautiful bonito live bait. But, unfortunately, and despite all the “chumming´´, had no luck with it as we worked between the south and northern edge of Sailfish Bay. However, right next to us Veleiro hooked up to a #500-pound Black on a live skipjack that they released.

We had a shorter day as the wind picked up really bad and finish it off at the reef up north.

Got some barracuda, snappers, small kingies, garfish on the light tackle and where busted off on 4 bigger GT´s.

The weather was much more cooperative the next day.

Still a real strong current from the N.

We started the day on the light tackle and there was great activity at 6-mile reef. Lots of action and released a couple of big Yellow spotted kingfish and had another taxed.

As soon as we got a bait, a big bonnie, we put it on the tubes and headed deeper.

Put it out in 55 meters on the southern side of Sailfish and within 5 minutes have a small Black around it. Strangely no bite and we even started throwing poppers at it. No reaction and it fades away.

We decided to head to 9-mile reef and although it wasn’t fireworks we had good fun there over the next couple hours.

Released 2 GT´s, pulled on another two and missed a real nice one. Then some odd´s and end´s including barracuda, quennies, yellow spotted trevally and some other critters.

We put the lures out and head home.

Still setting them out we have a knock down on the long right. Then it comes on the short-left Ruckus. A sailfish, but real lazy and after knocking the long for the second time it fades off.

Pretty dead everywhere as we make our way south, screaming with the current.

Finally, as we get to the bottom end of II-mile Reef we see loads of birds working a couple of skipjack schools. Work the area and hook up on a sailfish on the long right Green Marlin Magnet.

Great way to finish the day as Christopher Henkel releases his first ever billfish.

The guys last day was a real peach with a light northerly wind.

We changed tacks and headed up north.

Put the bait sticks out and within 30-seconds hookup but loose a fish. We then have a real nice one that screams away and we got to chase with the boat. No bait this one! Eventually it gets sharked and after 45 mins we break it off.

Work a tad south and at Nhangosse we find the dolphins feeding. There are fish everywhere and we could have had a light tackle ball but after getting a bonnie and a bludger kingfish simultaneously we decide to head out.

The bonnie dies after 15 mins and the strong, deep swimming bludger is unfortunately taxed after half an hour.

Come back in and have some more light tackle fun and again when we get two baits at the same time put them in the tubes and run out.

One bait dies and the other gets taxed within 30 mins.

Time to make a move and get away from the northern shark city.

Put the lures and work south. Miss a big wahoo and have another non-ID knock down.

At Sailfish Bay we get a skipjack and within 10 minutes raise a small Black once again.

And some scenario and get no bite out of. Real frustrating.

Meanwhile both Game Changer and Spanish Fly get juvenile Marlin on the bait rods in the shallows.

I ask the boys if they want to go in for a popping / jigging session.

They determined to try and get a billfish for Ryan on their last day.

That was the purpose of their trip and I just hope their persistence pays off.

Back to lures and work south again.

As we get to 6-mile we see loads of birds working a massive school of skipjack outside of us.

Just then Christiaan radio´s saying he hooked up to a #150 fish, again on a rapala on a bait rod.

We try and get a skipjack and after much persistence and missing a couple and pulling on one finally get one to the boat on the spinning outfit and the old reliable GT ice cream.

Put the bait out and start tacking south with the current.

Within 5 minutes we see a blue flash on the bait as a fish swims around it.

After having two fish not eat we are on our toes.

This time we get a bite and the circle finds the sweet spot as we come up.

Ryan jumps in the chair as this fish starts tail-walking behind us.

At just over 200 pounds not a monster but great excitement as the guys really put in the work for this one. It puts on a great show.

Like Christopher the previous day, Ryan looks like a natural in the chair and makes short work of this fish that gives us endless jumps all the way to the leader.

We let it go and high fives all round.

We make it back and have a stop at the reef for five casts.

On the last one we hook a decent GT on the light spinning tackle.

What a way to finish it off.

Back at the lodge we end it up in grand style, with the whisky flowing and some tequilas to rub it off. No waking up early next day so we let it get wild!!!

What a great bunch of enthusiastic guys to finish the Fishing Season.

Thanks, and see you next year Craig…always a pleasure!

We now back home and chilling with the family until early next year when the new Fishing Season begins with a few popping charters from Vilankulos and then off to Santa Maria for the peak of the Blue Marlin Fishing Season.

Just got to love this place…