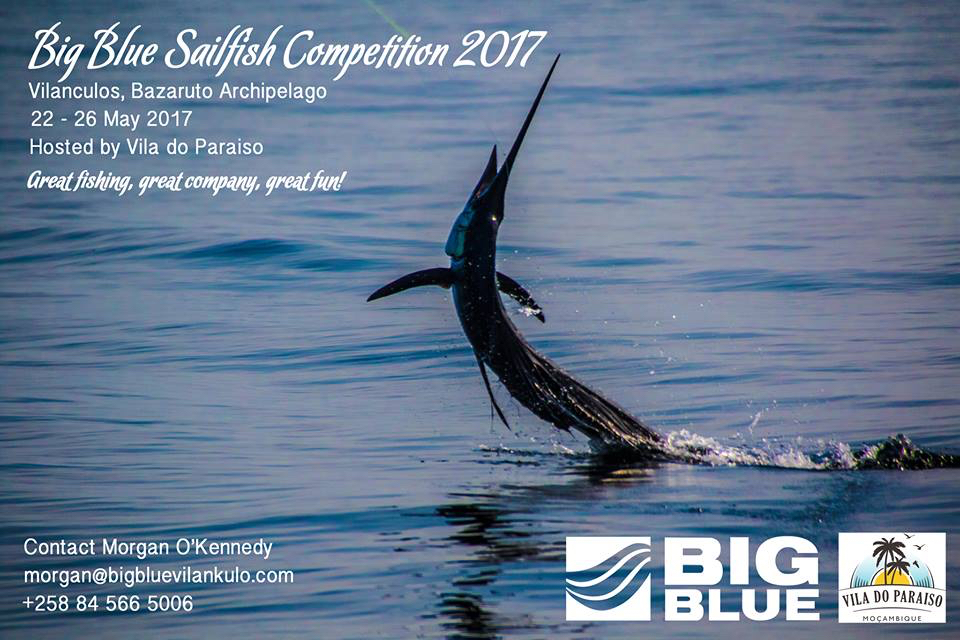 Once again, the guys at Big Blue and Vila Do Paraiso will be hosting the Big Blue Vilankulo Sailfish Competition between the 22 and 26 May 2017.

This yearly tournament is a great get together that brings the local sport fishing fraternity and visiting anglers together for 5 days of great fun. This time of the year does normally produces some exciting fishing in calm weather. Besides the Vilankulo Sailfish, the comp also gives points and prizes for Marlin and game fish.

Although I will sadly be away doing the Blue Marlin Season in Cape Verde at the time you are welcome to contact me or Morgan if you want to take part.

If you want to charter a local boat and crew let us know but private boats are also welcome and will be provided with local knowledge, tips on areas, techniques, rigging and local skippers if needed. Secure Mooring´s will be available in front of Big Blue.

Vila Do Paraiso has once again come up with a very nice package deal for their accommodation. The refreshments and food every night, as all that have been here before, are World class…

Please see the tournament details and rules below for the Big Blue Vilankulo Sailfish competition:

Entry Fees per team (max 5 members per team): I have kept it the same as last year.

– Fishing license for every angler,

– Dinner per person for 6 nights,

–          !!!! All boats must comply with Mozambican Maritime Law and must be available for inspections if needed.

–          Double the points of a sailfish if you release a marlin = 200 points. This is due to the fact that you should be rewarded if you are going to be spending more time targeting marlin in the deeper water.

–          This year we decided to allocate points to the above-mentioned species.

*You are only allowed to bring fish that weigh more than 10kg to the scale regarding the Tuna, King Mackerel and Yellow Fin Tuna.

*You will receive 2 points per kg for these.

*Only one fish of every species to be weighed every day.

*Dorado of minumum 5kg are allowed to be weighed worth 2 points per kg. Only one per day

–          The biggest fish weighed (any of above named species) every day will win a prize. Individual anglers

–          Biggest fish weighed of every species will win prize at end of tournament. Individual anglers

Let us know if you can make it, you will not regret it.