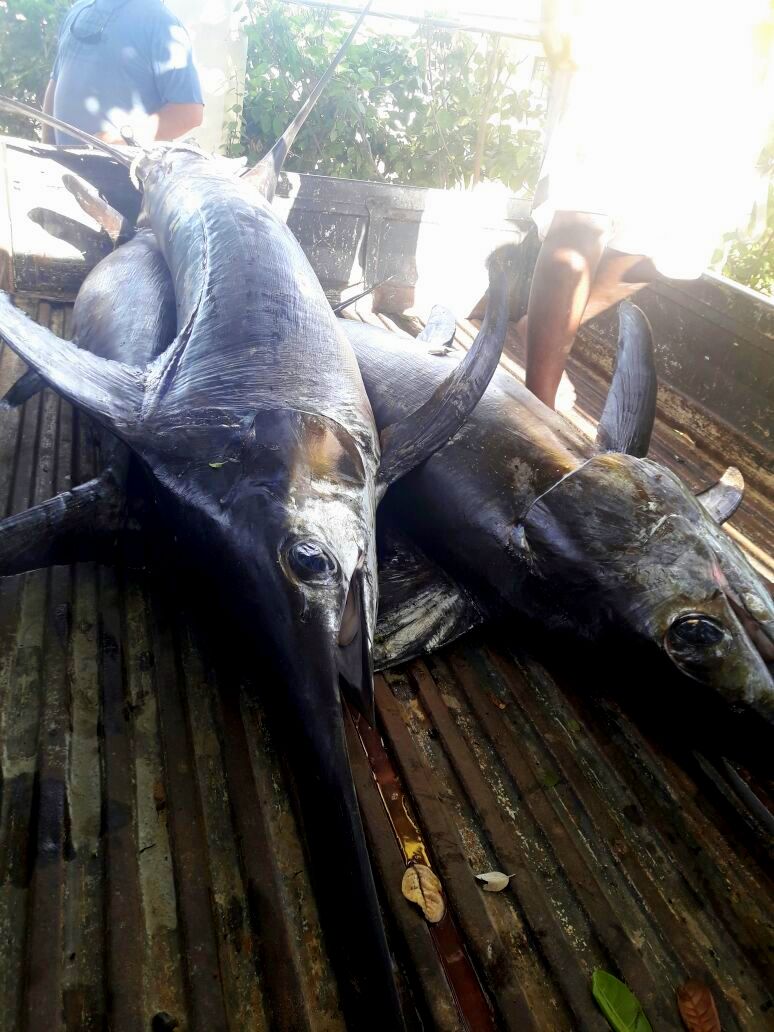 As it happens in most of its most iconic fishing areas on the country’s 2500 km plus stretch of coastline, there are no charter boats in Pemba targeting swordfish, despite the area presently being your best bet to catch a Mozambique Swordfish. What there was a few years ago, was a bunch of resident expats, who were also fishing enthusiastic, who saw the potential and started exploring.

Very soon they discovered an extremely healthy Mozambique swordfish fisheries. The local guys started organising fun competitions and for a few years I constantly heard about staggering numbers of swords being caught in the area from weekend warriors on small outboard powered trailer boats.

Recently talking to Wessel Stander, a mate who worked with me at Bazaruto more than a decade ago, and who has been living and recreationally fishing for swords in Pemba for a few good years, I was to learn that the bite is still as good as it ever was, except that most of the guys have left and presently only a couple of boats fish out there and only a few times a year.

But, to exemplify just how prolific this fishery is, he was telling me about the last night they went out, a couple of weeks ago. It was a good night, but nothing out of the ordinary from what we are used here, he told me;

“We hooked up straight after putting the first bait down at 6pm and landed the first fish just before 8pm. We set up again and all it took was 20 minutes to hook up for the second time. This fish, which was similar in size, also took about two hours to land. As we were deploying the bait for the third time, a fish took us by surprise while dropping and we could not set the hook…just got some burned fingers out of it! We went back to start another drift and had our fourth bite and third hookup for the night, again, almost straight away. Again, it took us a while to boat the fish and seeing it was 2am when we did so, we decided to call it a night and head home. One of the fish was very acrobatic and come out the water several times but we don´t really have any proper lights and all we could see was the cyalume stick as it cleared the water. All three fish where just shy of 175 lbs (77, 78.5 and 74 kg)”.

The longest they had a bait down that night was 20 minutes…truly impressive anywhere! Seeing the guys seldom go out and the meat is highly valued most fish are killed in this fishery.

In a country where there is huge potential but very little recreational fishing for Swords, I find it extremely interesting and talked a tad more with Wessel about it. As mentioned above, he tells me that a few years back there where many more local guys targeting them out on small ski boats and although no real monster where caught most fish fell within the 150-200-pound range. The biggest to date was caught by Alan de Boer at 278 pounds after a grueling 7h15 fight. Remember the guys are fishing at night on small trailer boats, headlamps and stand up #50 gear.

According to his experience in the area, the single most important factor for the presence of fish is the presence of squid and shrimp. These are mostly affected by freshwater entering the area they fish outside the river system, which in turn and at the right times creates huge blooms of both species. Anyone who has fished Pemba knows the sheer magnitude of the abysmal drop offs right next to land. The area where they have found the biggest concentration of fish is right in front of the river mouth in an area that has a pinnacle coming up to 450 meters of water but which abruptly drops to 1 200 meters in just over a nautical mile. Up to now all their fishing has been done at night using a whole squid, a small bonnie or a strip bait made from the back of a bonnie. However, they are planning to try some day time deep dropping soon.

Being the only billfish I have left to catch, think it´s time for a visit one of these days to catch that Mozambique Swordfish…

Another recent extremely interesting catch come from my friend Richard who runs Number One charters out of Maputo. On a deep bottom fishing outing last Saturday, the 4th of March they made a unique catch. Spending the day dropping between depths of 90 to 220 meters of water, they had great action with a number of good rosy jobfish, nice size groupers, red romans and then a fish that pulled real hard and come up as a BIG surprise. A Black Mussel Cracker (Cymatoceps Nasutus), the first we have ever heard caught in Mozambique (commercially or recreationally).

More impressive it was a real big one, at 38 kg´s, right up there at the top end of their growth range. This slow growing species only attains maturity at about 10 years of age and can live up to an estimated 45 years.  As the name suggests, this almost pre-historic looking fish, has an extremely powerful jaw with rows of molar like teeth. This allows them to feed on hard shelled invertebrates such as crabs, crayfish, sea urchins and mollusk’s. But of course, the interesting thing is that this fish is supposedly endemic to the South Africa Coast line and no one that I know as ever heard of any being caught this far north and certainly not in Mozambican waters.

And talking of Inhaca, despite the unseasonal winds and heavy rains that have plagued the southern Mozambican coast the last couple of months, the amazing Marlin bite is still going strong. Boats are still reporting an average of 4-5 or more fish raised a day, mostly Blues and Stripes. My good mate Luis Nunes (Aka Didi) aboard his 31ft Kambaku, recently had another great day, with 8 strikes and releasing a grand slam of a Black, a Blue and a Striped Marlin.

As we reported a few weeks ago and is well know the first grander caught Worldwide this year was a 1 245 lbs Blue Marlin in Cape Vidal, South Africa. What made this catch even more remarkable was that it was caught aboard Eye-Tie, a small outboard powered 21 ft Yeld Cat trailer boat.

Well, not much later, the second grander of the year was again a blue and again caught of another trailer boat, this time in Lobito – Angola.The fish weighted 1 097 lbs and was caught by Jose Pires with Capt. Sergio Reis.

In Portuguese, we have a saying “nao a duas sem tres” (there´s no second without a third time) and truth to it Capt. John Giford and angler Wade Wilson caught a 1 027 lbs Blue in New Zealand a few days later. Amazingly this marked the third grander of the year, once AGAIN caught on a small outboard powered trailer boat.

Since then, a 4th grander was caught in Mauritius aboard Zazou II, a blue that weighted 1 055 lbs caught by angler Chris Session.

It´s not only startling that the three first granders of the year were caught aboard small trailer boats but also that there has been four granders caught (all weighted) worldwide as soon as early March this year. In 2016, it took until May for the first grander to be caught anywhere in the World, that was the 1 290 lbs aboard aboard the Dreaming`on, in the Cape Verdes. In 2015, there was one in February and the second only in May again, both of them in Hawaii…