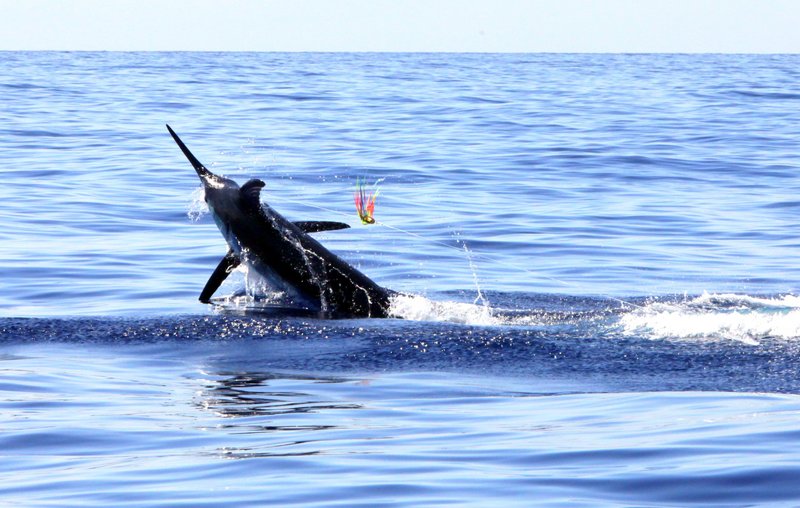 The 4th of July Blue Marlin World Cup is a unique tournament in the sense that it is fished all over the World simultaneously. It´s a one day event for a single species where teams fish for 8 hours (8h30 to 16h30) in their respective time zone´s for the biggest Blue Marlin.

Private and top charter boats from all around the Planet fish this event and 10 locations have won the first prize over many years. Kona (Hawaii) and Bermuda have the most wins, with 8 times each. But, by far and wide, they also have the most number of boats entering the tournament. Madeira as won it 5 times, two of which in the last two years. In 2015, the Pesca Grossa took first prize with a 652 lbs fish and last year it was Blue Makaira´s turn with an impressive fish of 983 lbs.

But where do the Marlin go on the 4th of July?

It´s anybody´s guess and that is the beauty of it!

Anyone, almost anywhere can get lucky on the day and win the big prize. This year was a perfect example and places that have been producing good size Blue Marlin on an almost daily basis for the last month did not get one on the day. On the other side, some places not known for the size of its Blue Marlin and even areas which are on their off season produced good fish on and around the 4th of July.

Even though these is the peak of winter, with water at 24.8c that one big fish could have easily been caught on my home waters off the Bazaruto Archipelago…and June and July have, in the past produced some good size Blues.

However, unlike last year, this year we were not at Bazaruto but rather in the bountiful Blue marlin waters of the Cape Verde´s islands.  (I was not there Initially I was supposed to fish with with Mark from Zambia and Jayson, who used to run the fishing at Azura Lodge, back home on the Bazaruto Archipelago.

Unfortunately, Mark had some business issues and had to cancel / postpone his entry for next year and without a charter for the day and after almost two months in Cape Verde I decided to head to Madeira to visit and fish with my good friend Peter Bristow, who needs no introduction in the Marlin Fishing World and who runs out of Madeira aboard the Katherine B.

Madeira had been on fire this season. Even though they have won the last two 4th July Blue Marlin World Cup, apparently, it was clearly better than the last couple of years and the bite was the best they have had in years, maybe even well over a decade and reports of fish past the 800-pound Mark where coming through on an almost daily basis.

The day I got to Madeira and when Peter got back his first words where “you a day to late, you should have been on the boat today and get a shoot of that beast that jumping towards us inside the spread”! They had gonne o for 3 on the day and pulled on a fish that they called # 1200! The day before they had released a 600 and the day before that a 950 plus! Ohhh yeah it sounded SWEET!

The next day started at 10 am with Martin and Claire, who had caught all those fish, on their last charter day. Not an hour into it and as quickly as we got to the eastern side of the cliff we hooked up on a nice 550 pounder that Martin promptly released. What amazed me the most was that as we worked this fish there where another four boats hooked up right next to us.

I have fished enough in this place to know it was going off and that we were right on the money!

The next day we started with Billy and Wendy from Florida. A great couple who would fish with us for the next four day´s including the 4th of July Blue Marlin World Cup. We had a slow start the first day but on the 2nd got a 300-pound fish for Billy and had another knockdown that did not materialize. Blue Makaira got a 550 and a 800 on the day, Anibal on the Balancal got a 600 and there were a couple of other smaller fish caught.

On the 3rd of July, the day before the big day it seemed the bite slowed down and there was little to no reports on the radio for most of the day. We did not see anything at all until 3pm when right in front of town a bomb exploded on the long right lure and we hooked up.

Wendy got in the chair as this fish proceed to scream off more than half the spool. When she eventually jumped and albeit being very far it was clear she was a good one.

After settling down Wendy really got into the thick of things and put some heat on the fish. We got the leader for the first time after about 40 minutes and eventually got her alongside for the release on the hour mark.

We were all ecstatic, especially Wendy who had done a brilliant job and at a good 800 pounds had released her biggest Marlin to date.

It felt good to catch her such a nice fish and despite the slower bite on the day there was nowhere else I wanted to be tomorrow to fish the BMWC.

The 4th was again a breathless beautiful day and like the rest of the World we put the lures in at 8h30am in our time zone. Unfortunately, we did not see anything on the day and, unlike the previous two weeks and as yesterday the fishing was rather slow. There were four Marlin caught in Madeira, three of them on vessels fishing the World Cup, but all where under the minimum 500-pound limit size for the event and where released.

The highlight of the day was when my mates from Mozambique (Marcelo, Ze, Joao, Juninho & Miguel) aboard the Margaritta hooked up right next to us. They never saw the fish on the bite and spirits where high but short lived as they brought in a 450-pound fish for the release.

I kept in contact with my mates in Cape Verde but it seemed no one saw any decent size fish down that end as well. We went to Viola, amongst my favorite restaurant in the World that night, and by the time we went to bed it seemed there were no fish big enough in Bermuda and that it would be Hawaii´s turn.

However, it was not to be and as I mentioned before any place can take it and this time the winning fish come from the Gulf of Mexico aboard Done Deal´s with a fish of exactly 600 pounds.

Well done to them and it´s great to see winnings coming from all over the planet!

Next year we will be fishing the 4th of July Blue Marlin World Cup in Bazaruto – Mozambique, anyone interested in taking place contact me.

More about the tourney can be researched here…https://www.bluemarlinworldcup.com/

And a video of the winning fish on the leader…

Last but not least I would like to mention the passing away of Jim Rizzuto on the 2nd July in Hawaii. I never knew him personally but remember reading his articles ever since I started fishing many moons ago.

The Sport Fishing World lost a true ambassador and spokesman for the sport but his legacy will stay with us for many more years to come….

RIP in the eternal Oceans of tomorrow Jim!

Tight lines & all the best,